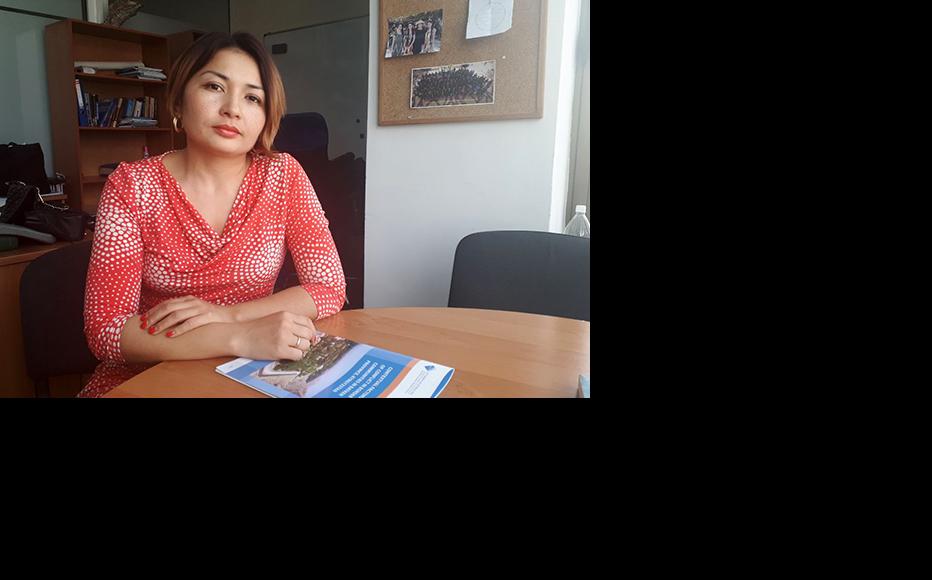 Bishkek-based expert Asel Murzakulova, has studied the issues along the Kyrgyz-Tajik border for several years. (Photo: Timur Toktonaliev/IWPR)
The link has been copied

As many as three people may have died in the latest outbreak of violence on the Kyrgyz-Tajik border.

According to the Kyrgyz authorities, one border service officer was killed and 13 others sustained gunshot or shrapnel wounds when conflict broke out on the Maksat-Ovchikalacha section on September 16. Although the Tajik authorities made no official comment, a regional official said that three of their border guards had been killed.

The Kyrgyz-Tajik border is 976 km long, but 472 km of it has not been demarcated since the collapse of the Soviet Union in 1991 and there are frequent conflicts over land, access to irrigation and drinking water and road use. Skirmishes between local residents often spill over into armed confrontation between the border services of the two republics.

Bishkek-based expert Asel Murzakulova, has studied the issues along the Kyrgyz-Tajik border for several years, explains the factors that prevent both parties from settling the disputes.

IWPR: The border issue is raised by politicians again and again after each conflict. But why has there been no progress in solving it?

Asel Murzakulova: The border issue is a very sensitive topic, which has high political costs for Dushanbe and Bishkek. Recent events show that the parties do not exclude a heavy-handed approach, and in this regard, populism - that is, focusing on a show of power - still prevails. However, this scenario is not new for the region. Just recently, back in 2000, the parties had already established checkpoints in disputed areas and had to gradually remove them; in some cases they had to do it due to pressure from local residents, in other cases as a result of bilateral negotiations.

Populism is an extremely calamitous option in such a sensitive issue as the border, and it is often used to hide a lack of political will. Political will implies mutual concessions, which can usually cause damage to one’s own interests in the short term, but allows benefits in the longer term. Modern leaders are not ready to pay this price as it involves a loss of public support.

What are the reasons for these conflicts?

It is not quite correct to say that conflicts occur only because borders are not defined. Border conflicts arise because local residents have no sense of security and no access to justice. The only authority they can apply to are the border guards.

What do people need? They need security. Not the kind of security when they are asked to present their passports every now and then and when armed people become a routine of rural life, but the kind of security related to traveling safely to a market, hospital or school without a checkpoint.

Why can’t the Soviet approach of sharing cross-border resources be used again now?

The key reason why it is difficult to use this experience is poor management. As this is a complex issue, which involves not only diplomats, we need to involve water engineers and the local authorities. This complex management is now totally ineffective. Moreover, both countries have different models of natural resource management, and this asymmetry greatly limits the use of an integrated approach in the issue.

Today, all disputes focus on the imaginary border line, and in fact almost all important irrigation canals are cross-border, just like roads and other important infrastructure used by both countries.

When we speak about settling these issues, we need to understand which models we focus on: the border, which is divided by a fence many kilometres long, or open borders like in the European Union? If we choose the second one, we already have a certain legacy in this issue, which must be kept.

Why have there been more armed confrontations in recent years?

The parties believe - wrongly - that order is maintained only by hard power. The more they think so, the more it happens. It is like a self-fulfilling prophecy. To demilitarise these zones, it’s necessary to strengthen the joint work of law enforcement bodies and ensure local residents have access to justice. Here we need to have a kind of a permanent response team at the level of the ministry of interior affairs to investigate offenses in disputed areas. The impartial work of this kind of group will have a big impact on reducing tensions. So far, the locals don’t have this opportunity.

Being armed to the teeth seems more rational in a situation where no one is protecting you, when you feel constant threat. Then, of course, people begin to arm themselves. They feel injustice, in a vulnerable position. An integrated approach is needed here, as there is no universal solution.

How do you assess media coverage of the issue on both sides?

The media should stop talking only about their own victims; they need to raise awareness of the victims and losses on both sides. Journalists should not look for those responsible – they are not prosecutors who need to cover this information in their articles.

The role of the media is to provide unbiased information from the scene and maintain a balance of opinions. Journalists rarely present expert opinions, although the sober opinion of experts from both sides always helps to tune in to a constructive manner and demand negotiations, results, and progress from the state.

Giving Voice, Driving Change - from the Borderland to the Steppes
Kyrgyzstan, Tajikistan
Land, Conflict
Connect with us