Yemeni president keeps up his tried and tested method of weakening dissent.

Yemeni president keeps up his tried and tested method of weakening dissent. 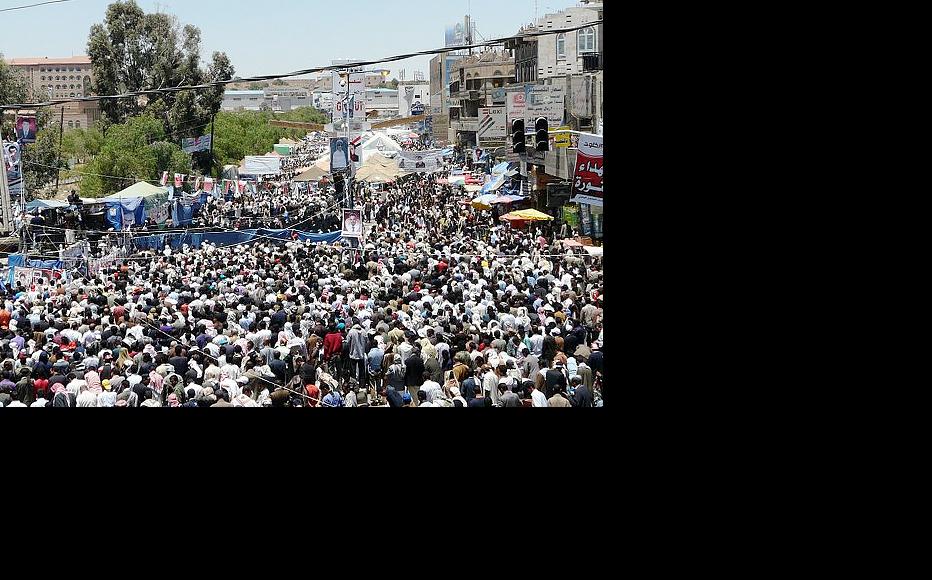 Protests at Sana’a university. (Photo: Email4mobile/Wikimedia)
The link has been copied

As the United Nations Security Council members held talks this week to discuss the situation in Yemen, there were clashes between peaceful protesters rallying in the main streets of Sana’a.

Five people were killed, 200 hurt from live fire and 500 more injured by the effects of tear gas after security forces opened fire on the protesters.

A number of female doctors were arrested after they attended the rally to help treat injuries – and were only released after protesters warned they would march on the president’s palace if they were detained.

At the same time, demonstrations continue in a number of Yemen’s provinces, met with a violent response from the authorities resulting in the deaths of protesters.

The situation in Yemen has been heating up like never before in recent weeks, since the deadly day of March 18 when 50 people were killed.

Hundreds of people have been killed around the country and thousands injured.

In Sana’a, streets are periodically closed off either by government roadblocks or by collections of small domestic gas tanks in a sign of protest against the acute lack of gas around Yemen after the main gas lines were blocked – it is still unclear just who was responsible for this sabotage.

Trade and business transactions are slowing down due to the political turmoil. People’s basic needs are not being provided for - with constant complaints from around the country on the lack of essential goods such as food.

All the indicators are of a bleak future for Yemen if President Ali Abdullah Saleh does not resign.

“Dancing on top of snakes’ heads,” is how Saleh once described the experience of ruling Yemen. He is now facing his greatest challenge of his whole life, with the unspoken understanding here that he won’t give up power without more bloodshed.

Meanwhile, he will use all his power to buy himself time and stay in place.

The man who has ruled the country for 33 years warns that civil war is inevitable if he is forced out. But so far, tribal men have not used their weapons in the protests, while it is the government forces that kill demonstrators day after day.

Tribes are increasingly joining the rallies; representing and calling for peaceful protest and demanding that Saleh be ousted.

A huge part of his ability to maintain his position has lain in the principle of “divide and rule” - and he has tried to do the same amongst the ranks of the protesters.

He recently addressed his supporters at a rally in and criticised the presence of women in Sana’a’s central Change square, the focus for the pro-democracy protests.

His aim to provoke internal conflicts among the protesters was also recently highlighted by a Yemeni journalist based in the United States, Munir al-Mawri.

“Saleh will provoke divisions between Islamist and liberals, civilians and the military, and so on,” Al-Mawri wrote.

Saleh has now started to do that with women and men. Later, he might criticise other protest participants with this technique.

However, the pro-democracy movement has developed a deep bond and is more united than ever in its wish to oust Saleh.

Every day, rallies take place in most of Yemen’s provinces and protest tents are being set up in municipal squares around the country. The more time Saleh tries to buy, the closer the protesters become – so how can civil war start in such circumstances?

Saleh now only has weak control over the state - his military officers are joining the protests – but he will cling on. I know that Saleh won’t easily give up.

Afrah Nasser is a journalist and blogger based in Sana’a.