A Safe Haven For Those Fleeing IS

A Safe Haven For Those Fleeing IS 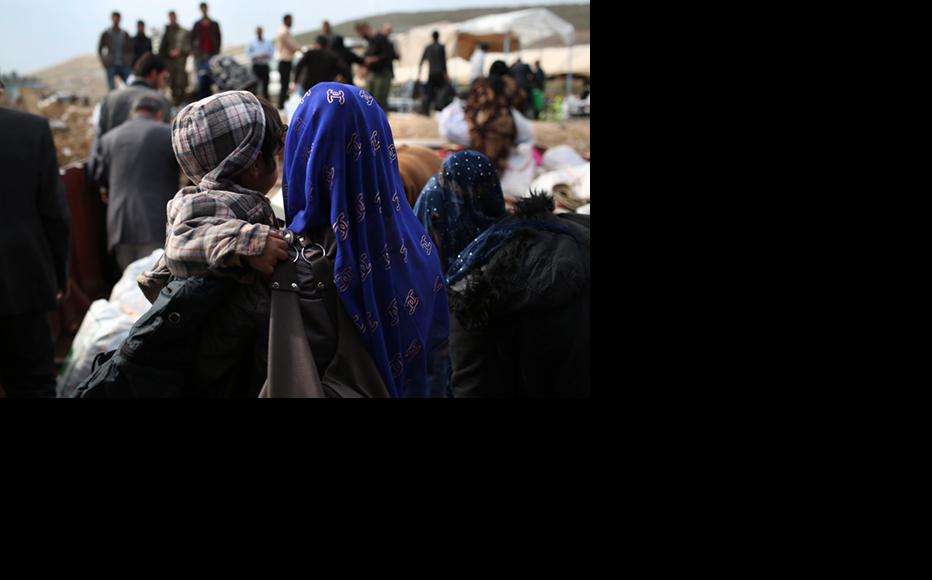 A group of refugees returning to northeast Syria. (Photo: John Moore/Getty Images)
The link has been copied

“I will put lipstick and eyeliner on, then smoke and wear whatever I want; I will go to parks and dance at weddings and maybe in public squares. The nightmare is over!” said 21-year-old Mayyada, imagining what she will do when she finally returns to her home in al-Joura, Deir ez-Zor.

Mayyada had to drop out of university when the region fell under the control of Islamic State (IS). The militants forbade subjects including law, philosophy and foreign languages.

“I will never forget that for two years, I couldn’t even put on a little lipstick. I always had to be covered when I went out. I’ll never again be subjected to their ridiculous concept of decency,” she added.

Like many others who fled in Deir ez-Zor, Mayyada now lives in the Mabrouka camp, set up in 2016 by local authorities in Syria’s Hasakeh governorate to house those escaping IS rule.

Although only a few pockets of IS influence remain in the area, many former residents say that they prefer to wait a while longer in the camp before risking the return homes.

For Alia, 22, it was a long and expensive struggle to reach Mabrouka in the first place.

After several failed attempts to flee Deir ez-Zor with her elderly parents, the youn
g woman finally paid 1.5 million Syrian pounds to people smugglers. IS had not only killed her brother after he refused to join them, but her three other siblings had also disappeared.

“We had to pay a ridiculous amount of money to be able to escape hell,” Alia told Syria Stories. “When ISIS first controlled the area, it acted as if we were its enemy, torturing us slowly to kill us,” she recalled.

Children were subject to the same strict rules as adults under IS control. Rouba, 12, still cries when she remembers how she was beaten and verbally abused by a so-called IS modesty patrol. Her mother recounted how the girl had been on her way home one day when three women stopped her.

“My daughter was returning home from our neighbours’ house when a female IS patrol tracking women wearing make-up and so on stopped her. One of these women was huge and had a wooden stick as well as a rifle. Rouba looked at those women innocently and did not know what was awaiting her,” she continued.

“She was asked to come closer, and before she could say a word, they started beating her and insulting her. One of them broke Rouba’s hair clip and called her a whore,” her mother continued, adding that her daughter had returned home bleeding and crying.

Mona, 15, became so accustomed to wearing the black abaya and face veil mandatory under IS rule that she kept it on even after she left Deir ez-Zor.

This caused confusion and panic when she visited the Ras al-Ain hospital before travelling to the refugee camp.

“I entered the hospital with my mother; I left her in the examination room and went out to look at other patients. I couldn’t understand why everybody was afraid of me. At the end I found myself surrounded by a group of adults wearing black military uniforms,” Mona said.

She was taken away and searched by a bomb disposal expert, before being returned – with some sweets and biscuits – to her mother.

The hospital authorities had received a warning about a potential attack by a child suicide bomber.

“I couldn’t move or even speak; we still feel afraid of just talking to any military, security or other apparatuses, I could not understand why they took my daughter from me” Mona’s mother recalled.

For others, the camp represents a space where they can recover from their trauma. Former fabric salesman Abbad, 52, said that he now liked nothing more than to sit quietly soaking up the sun after spending a harrowing prison term in an IS cell.

“I could not see the sun for three months in the cellar I was kept in. The smell of dead bodies and blood there made you want to throw up,” he said.

He was seized by an IS unit calling itself Infidel Trackers who accused him of blasphemy.

“They pushed me into a room. I was blindfolded and my hands were tied. After a long while, I heard a deep, terrifying voice and I knew from his accent that he was not from an Arab country. He told me, ‘You are an apostate, and we will execute you, and then he shut up,’” Abbad said.

Abbad was accused of not washing properly before prayer and not reciting the verses correctly. He was sentenced to death by lashing, which was later commuted to 100 lashes, three months imprisonment and a fine.

As soon as he had served his sentence, Abbad sold everything he had so as to leave the city. He still dreams of the day he can go back to his life in Deir ez-Zor.

Some displaced people have managed to move out of the camp, although they have so far been unable to return home.

Ahlam refused to join IS when members came to recruit her. She hid in her neighbour’s chicken coup until the militants left. The 30-year-old, who graduated in sociology from the University of Damascus in 2010, then paid a hefty sum of money to be smuggled out of the city of Raqqa.

“When I arrived in al-Hasaka, we were taken to the camp. We couldn’t get everything we needed there of course, but it was still better than living on death row, not knowing when our turn is. I decided to join the Asayish [Kurdish security forces] women’s section where I could improve my skills and work in my field of expertise. I am happy about that,” Ahlam said.

Ahlam now earns enough to be able to rent a house in the suburbs of al-Hasaka where she lives with her family. She accepts that al-Hasaka is her home for the time being, but also dreams of returning to her own city.

Syria
Conflict, Refugees
Connect with us