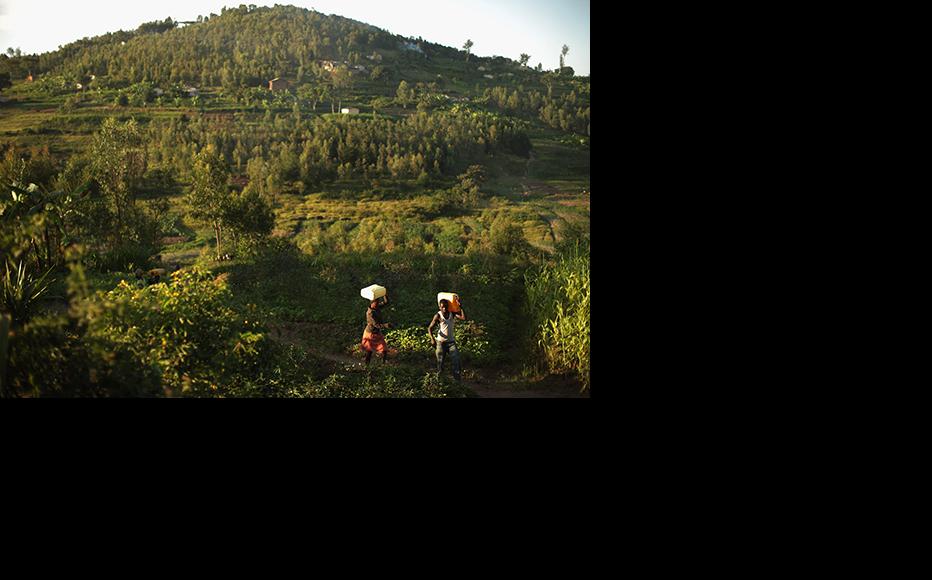 People transport goods in the Rwandan countryside. (Photo: Chip Somodevilla/Getty Images)
The link has been copied

He began drinking as a child, he said, and from the first sip his life had been destroyed.

“When I was still at school, you know my vision was always to be a doctor, but this has let me down,” Popote explained. “My parents stopped caring, arguing that am useless without any future.”

He was soon expelled from school, and began taking other drugs too.

“I don’t fit in society now, whenever I meet my old school boys and girls, I feel ashamed of myself,” he said.

I went to Kagarama secondary school with Popote. He is just one of many of my family members and old friends whose lives have been severely affected by kanyanga.

Ben, another friend, is also struggling to break free from kanyanga. Having lost his parents in the 1994 genocide, the government educated him through the Fund for Neediest Survivors of Genocide in Rwanda (FARG).

“FARG helped me to study but kanyanga really messed everything up,” Ben said. “I remember I was expelled from the school, that was in 2012.”

Since then, he has been unable to break free from kanyanga.

“I have been caught very many times,” Ben said. “I was taken to rehab twice when I had no money; but when you have money you can talk to them and can easily be released before you reach there.”

In any case, he continued, kanyanga was easily available in rehab, too.

Rwandan law categorises all drinks with an alcohol content of more than 45 per cent as narcotics. But although kanyanga has long been banned in Rwanda, a steady supply is being smuggled into the country under the watch of the authorities.

Uganda appears to be the main source for kanyanga, with more than 80 routes used by traffickers to transport the substance to sectors including Matimba, Musheri, Rwimiyaga, Tabagwe and Rushaki. Kanyanga is also made inside Rwanda, in areas including Kabarondo Kayonza district.

I travelled to Uganda and Kenya undercover to report on claims that police corruption is key to the trade. My investigation began in the border districts of Nyagatare and Gicumbi, the main kanyanga-smuggling hubs.

In Nyagatare’s Matimba sector, I visited Ku Gataje, a popular bar, and ordered kanyanga. The barmaid carefully scrutinised me then disappeared behind the counter before reappearing a few minutes later and announcing that they did not sell kanyanga. I asked her where I could get it, to which she replied that she did not know.

I returned the next day with a local man, having learned that kanyanga goes by different names and will not be sold to you unless you order it by one of its various pseudonyms.

On arrival, I asked for akabapapa and received a glass of what I identified as kanyanga. My local contact told me that kanyanga was sometimes siphoned into authorised gin bottles.

Later that evening, I met Majyambere (not his real name) a vastly experienced kanyanga supplier in Nyagatare district who has been in the business for more than 13 years.

The trade was so lucrative, Majyambere continued, that he had himself managed to build two houses, marry and send his children to good private schools.

“Kanyanga is profitable, and the demand is high… kanyanga is cheap and as we all know people are poor. Lastly but not least for someone to get high it just needs as little as that of 500 Rwf (50 US cents),” he said.

Majyambere told me that he bought kanyanga from a place called Muhanga in Uganda and transported it to Rwanda by motorcycle, with the full knowledge of senior local police figures.

One particular official, he claimed, took home a full 40 per cent of the entire revenue from the kanyanga smuggling in this border region.

Article 594 of the Rwanda penal code stipulates that any person who unlawfully makes, imports or sells narcotic drugs is liable for a prison term of three to five years and a fine of Rwf 500,000- five million (552 to 5,525 US dollars). The same article also provides a jail term of between one and three years of anyone who consumes narcotic drugs, kanyanga included.

However, Majyambere clearly operated with impunity.

“Do you know people who are in prison due to kanyanga?” he continued, laughing.  “It is obvious you cannot work with all the policemen, but there are those you must do for the business to go on, and senior officers that can impact any situation just with a word, that’s when now you are safe for that business.

It was impossible to operate as a kanyanga trafficker without utilising a network of police protection, he continued, which he had gained access to after paying an initial bribe of 60,000 Rwf (66 US dollars).

“We have powerful accomplices within the police force. That’s why our business has lasted this long,” Majyambere claimed. “You can only get into trouble if you fail to bribe them.”

I travelled with Majyambere to Muhanga on his motorcycle to collect a shipment, and we returned loaded with six 20-litre jerry-cans of kanyanga. Stopping at Kasaza on the Rwandan side of the border, Majyambere made a phone call to a police contact asking for advice on the safest route back. He was told to use the route that brought us to Rwimiyaga centre, about 45 kilometres away.

He then sent the requisite revenue to a senior police officer through mobile money transfer.

“He doesn’t like face to face meetings,” Majyambere told me.

Majyambere introduced me to Sibomana, another supplier based in Gicumbi district who claimed to be working with the same senior police official.

To test the level of border control, I then travelled alone to Kabare through an illegal pass in Rushaki sector where I had no difficulty purchasing a three-litre jerry-can of kanyanga.

On my way back, Rwandan police stopped me and searched my bags. When they discovered that I was carrying kanyanga, they demanded a 30,000 Rwf bribe, all the money I had, to release me. I negotiated them down to 20,000 Rwf.

Rwandan police spokesman John Bosco Kabera said that the force did not condone any indiscipline of any sort and “if there is any police officer involved in drug dealing or any other crime, he or she faces the law immediately”.

Kabera said that the Rwanda national police had stepped up their campaigns against drug abuse and intensified the fight against traffickers and consumers, but added, “Porous borders with the neighbouring countries are still a major problem.”

Nonetheless, cases involving drug abuse are increasing steadily. Substance abuse among young Rwandans remains “a public health concern and family challenge,” according to a 2016 study by the International Journal of Emerging Trends in Science and Technology.

It found that more than 50 per cent of Rwandans used at least one banned substance during their lifetimes, with half of this number using more than one drug.

According to the Rwanda Investigation Bureau, based on data published in the 2018 national statistical yearbook 3,992 court cases involving kanyanga were registered in 2015, with 4,059 the following year and 4,247 registered in 2017.

Ismail Buchanan, a lecturer at the University of Rwanda, attributed the rise in drug abuse to multiple factors.

“One of them is the 1994 genocide. Many young people who lost their parents are living in households headed by youth themselves,” he explained. “Some come from disjointed families while others are influenced by their peers.”

Buchanan called for the creation of strong support networks in Rwandan society to deal with the problem, as well as state-run rehabilitation centres. at the district level to rehabilitate the drug addicts.

“Police must break the drug supply,” he concluded. “Journalists need to create awareness on drug abuse and trafficking.”

This story was produced by IWPR's Kenya partners Africa Uncensored with IWPR support. The investigation was supported by  the Rwanda Journalist Association (ARJ) investigative project.

Rwanda
Corruption, Police
Connect with us