Mix of local irregulars, volunteers and some troops may not be enough to secure the win Moscow wants.

Mix of local irregulars, volunteers and some troops may not be enough to secure the win Moscow wants. 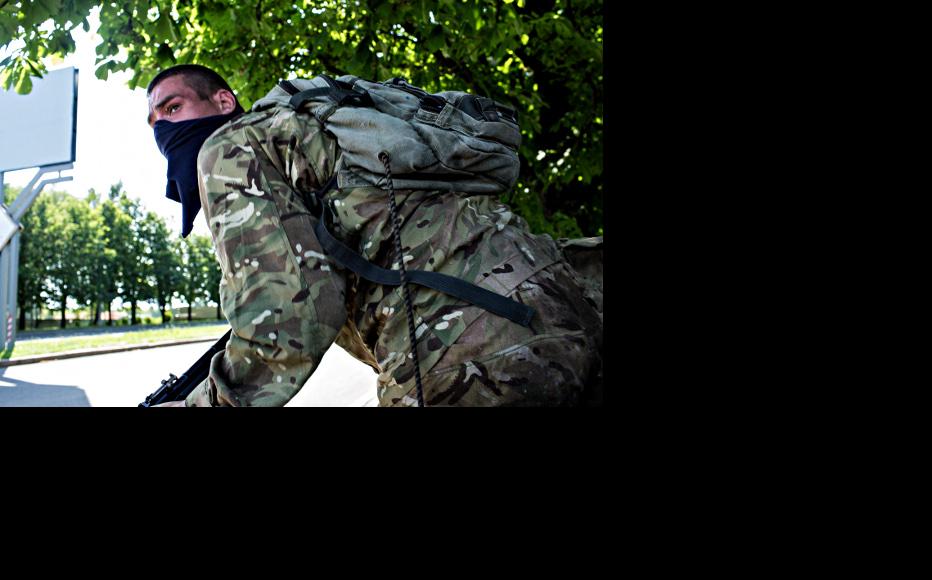 A separatist fighter outside Donetsk airport, the scene of a battle between pro-Russia forces and the Ukrainian military on May 26, 2014. (Photo: Brendan Hoffman/copyright Getty Images)
The link has been copied

Sanctions appear to have deterred Moscow from any further military escalation in eastern Ukraine. But although Russia has sent no official military support, Kiev is sure it is orchestrating and backing the rebel fighters, with a regular stream of volunteers entering eastern Ukraine from Russia.

“This is a so-called new type of war, a hybrid war, where armies do not always take on the role of direct aggressor. Instead, they serve to intimidate, while imported sabotage groups [do the fighting] together with local extremists and criminal gangs fight on the ground, Parubiy told the Financial Times, adding that these irregulars could not enter Ukraine or operate there without “coordination and support” from Moscow.

The Ukrainian authorities point to numerous examples of what they claim is the direct engagement of Russian troops. On May 26, for airborne troops took back Donetsk airport after it was seized by separatist fighters. About 40 fighters were killed in the fighting, and the SBU announced that an inspection of their personal effects revealed they were from a Russian interior ministry battalion.

Others come as volunteers. Yaroslav Gonchar, a deputy battalion commander in the Ukrainian army, told a Kiev press conference on May 29 that “since the very start of the conflict, about 4,500 fighters have crossed the Ukrainian border illegally from Russia. It is a rabble from all the former Soviet countries.”

One armed man – a Ukrainian national – detained on May 26 in the town of Izyum in Kharkiv province said he had received training together with some 150 other volunteers in a Russian military camp on the other side of the border. Other individuals captured by the Ukrainian authorities say they were promised monthly wages, and in one case, reportedly a bounty for every sniper kill.

There have been sightings of combatants allegedly from Chechnya. Asked by a CNN journalist where they came from, one of them said they were “from the Russian Federation”. Stanislav Rechinsky, an adviser to the Ukrainian interior minister, has told journalists that each Chechen fighter was being paid 300 US dollars a day.

Chechnya’s Moscow-backed leader Ramzan Kadyrov has denied sending forces to eastern Ukraine but would not rule out the possibility that volunteers had gone.

The Russian media has helped encourage volunteers to go to eastern Ukraine. After protests began in Kiev in November, the line taken by most of the Russian media was that this was a fascist movement. When President Viktor Yanukovich fled and an interim administration took over, TV audiences in Russia were told that the Russian language was banned and people who spoke it were in danger.

In a recent paper, Jolanta Darczewska of the Centre for Eastern Studies in Warsaw wrote that the “Russian information warfare is set to continue since Putin’s new doctrine has crystallised”. Describing this doctrine as “geopolitical, Eurasian, anti-liberal and oriented towards rivalry with the West and Russia’s dominance in Eurasia”, she warned that public debate in Russia would focus on “Russian political myths and ideologised propaganda actions”.

But some commentators argue that this “hybrid war” is doomed to failure, as even with covert Russian backing, irregular armed groups lack the strong public support they would need to withstand a conventional army.

Andrei Illarionov, a former adviser to Russian president Vladimir Putin but now highly critical of him, told the Tizhden magazine on May 24 that Russia’s tactics towards Ukraine had failed.

“I think that now, after three months of failures in eastern Ukraine, Putin has understood that he won’t succeed in destabilising Russian-speaking regions of the country with the help of a so-called ‘Russian Spring’ or a Russian-inspired ‘people’s uprising’,” Illarionov said. “He sincerely believed his political engineers who said, ‘Ukraine doesn’t exist as a country, there is no Ukrainian society, Ukraine is only a conglomeration of disconnected territories, and it’s enough to strike a match and all of Novorossia [eastern Ukraine] will burn. and it will be easy to annex.’”