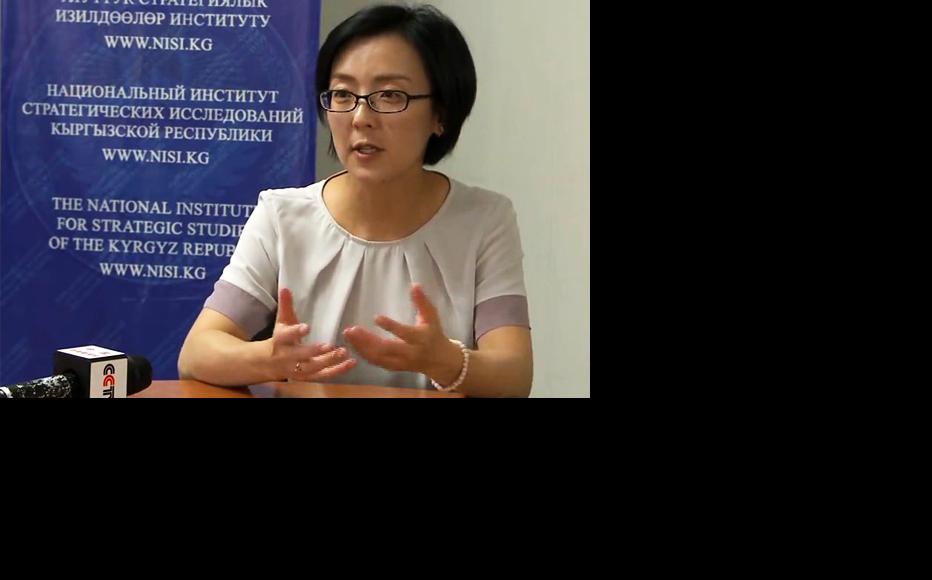 Chinara Esengul. (Photo courtesy of National Institute for Strategic Studies of the Kyrgyz Republic - nisi.kg)
The link has been copied

Russia continues to lack a common policy on Central Asia, preferring instead to pursue bilateral relations with individual states, according to regional expert Chinara Esengul.

The Kyrgyz analyst on Central Asia geopolitics and security told IWPR that she saw no future imminent accessions to the customs union of Russia, Armenia, Belarus, Kazakstan and Kyrgyzstan.

But Russia would still play a key role as a guarantor of the national and regional security of Central Asia, balanced by some economic competition with China.

The only serious threat to Moscow’s dominance in the region, she continued, was the threat of radical Islam.

IWPR: How would you evaluate the relationship between Russia and the Central Asian states?

Esengul: First, the relationship between Russia and Central Asia is more bilateral than regional. We need to pay more attention to the substance of bilateral relations as the degree of their maturity and intensity varies. For example, Russia’s relationship with Uzbekistan is not as strong as the relationship it has with Kazakhstan and Kyrgyzstan. This is due to the fact that both states are members of the EEU.

Tajikistan’s accession to the EEU is not imminent, but in terms of strategy, the accession will improve the dynamics between Russia and Tajikistan. When we speak about the EEU, we should speak not about Russia and any potential candidate country, but about all EEU countries and a potential candidate country [but] this situation remains challenging because Russia is still the dominant country and prefers a bilateral negotiation format.

In the context of the EEU, what can you say about the relationship between Kazakhstan and Kyrgyzstan?

The relationship between the neighboring countries of the EEU is not ideal, for example, between Russia-Belarus or Kazakhstan-Kyrgyzstan. These are natural processes because every country wants to protect its own market in every possible way; even despite the absence of tariff restrictions, a country imposes informal restrictions like phytosanitary and veterinary control. So I think these processes are intrinsic and every integration union has to overcome them. Europe also went through these processes when they created the European Union and the customs union, in particular. I see these processes as a normal course that should be managed. In this regard, Kazakhstan behaves very selfishly, Kyrgyzstan carries out its obligations lazily and rather carelessly, so as a result we have the situation of mutual accusations and de facto protectionist practices of neighboring states.

Many experts say that the EEU is dominated by politics rather than economics, leading to many economic problems. What do you think about that?

Yes, initially it was a strategic geopolitical project. [Kazak president Nursultan] Nazarbaev was the first to raise this idea back in 1994. Back then, it was intended as a comprehensive integration project with no political focus. In the 90s, Nazarbaev thought that all the ties between the Soviet states could be restored - until the full collapse.

The idea reappeared when Vladimir Putin came to power and he saw it as the restoration of the former role and influence of the Russian Federation. But the first step to such a political union was still economic, so everything started with a customs union of three states: Russia, Kazakhstan, Belarus. If we evaluate that stage, it was a political and economic structure with the emphasis on some technical regulations, standards, generally issues of an economic nature.

To what extent does China obstruct Russian plans regarding Central Asia?

I think they have a strategic understanding and a certain division of zones, an understanding of the role of Russia and China in Central Asia. So China implements its infrastructure and transit projects, and Russia cannot resist in any obvious way. As for the security sphere, China has no doubt about the key role of Russia as a guarantor in terms of the national and regional security of Central Asia. Speaking about national security, there are CSTO [the Russian-led Collective Security Treaty Organisation] forces in Kant [in Kyrgyzstan], so they protect the airspace security of member states. Our national security is to some extent ensured by an external organisation. Therefore, Russian troops play a major role [and China] is not represented in the security sphere at all. So far, the two states are satisfied with the status quo and the allocation of roles. We’ll see if this situation changes in the future; everything depends on how relations between Russia and China develop, which, in turn, depends on Russia’s relations with Europe and the US and on relations between China and the US.

Apart from Kazakhstan and Kyrgyzstan, do other Central Asian states want to cooperate closely with Russia?

I would say they do want it, but not as much as Kazakhstan and Kyrgyzstan. Turkmenistan is a country that announced neutrality back in 1995, they have a law on positive neutrality, a model recognized by the UN, so I think they will keep to this concept for a long time, which excludes the accession of Turkmenistan to any union. Uzbekistan, from the first years of independence, has assumed a rather independent position on foreign policy.

We have learnt that Uzbekistan can change its foreign policy very fast. Cooperation means having no serious obligations, but just partnership agreements, i.e. after fulfilling agreed tasks, each side may pursue its own path. Integration project is a serious process and implies the presence of supranational organizations, and Uzbekistan will never be a part of it because, in my opinion, its foreign policy is based on a totally different principle. It is based on national interests, and they will not trade their sovereignty in return… the likely maximum that can be reached is a free trade zone.

It’s very difficult to discuss Tajikistan. In terms of real indicators, such as dependence on migration issues [about two million Tajik migrants work in Russia] and the long-standing presence of the Russian military on the border with Afghanistan, Tajikistan will gradually move towards accession to the EEU. Yet there are serious elements that distinguish Tajik from Kyrgyz-Kazakh relationships with Russia. Tajikistan since the years of independence has spent five years embroiled in civil war and has strongly integrated cultural and linguistic ties with Iran and northern Afghanistan. These realities will force Tajikistan to choose. They have an alternative, they may have access to the sea through Iran, with which they share a similar cultural and linguistic civilisation.

How satisfied is Russia with the current state of affairs in Central Asia? Some Russian populists think that all countries in the region should be guided by Moscow alone.

First, historically, Russia cannot decide which side it belongs to, Europe or Asia. Now its relations with Europe and the West have deteriorated badly, a situation that seems to be lasting for a long time. Russia has had to turn to Asia, particularly China for geo-strategic and geo-economic reasons. As for Central Asia, it was totally forgotten during the [Boris] Yeltsin presidency and for many years. At that time we forged ahead and developed relations with other partners, so now we cannot say that Russia can be the key state that can not only promise, but also keep its promises. In the case of Kambarata HPP [a hydroelectric power station on the Naryn River in Kyrgyzstan] we can see that Russia’s desires are not properly backed up with their capacity to perform. I would take the statements of those people who think that Russia must be the sole player and strategic partner of Central Asia as their personal desire and nothing more. Putin pursues realpolitik; he knows the potential of every country and therefore he makes the politics bilateral, not regional. He takes every state individually, uses every vulnerable area, or vice versa donates anything, or forgives a debt. Russia is using various methods in the bilateral format, but it has no regional strategy.

If Russia has strong means of pressure, why doesn’t it use them to bring Uzbekistan and Tajikistan closer to Moscow, with more cooperation including joining the EEU?

I think it is too early. Russia works within its capacities. They cannot put pressure on everyone, so they first work with Kazakhstan, then with other states. Russia works toward its goal slowly but surely. They expand the Eurasian zone gradually and as far as possible. They cannot start active actions on all fronts, and then fail to provide all of them with resources.

But Uzbekistan or Tajikistan are next in line to join the EEU?

Yes, in any case they are. We cannot be sure about how long the process of joining [the EEU]would last. This is a normal occurrence for such a superpower as Russia, which has set the goal. On the other hand, the question is how other major players like Russia, e.g. China, US, Europe can and want to manifest to our countries that they would be an adequate balance and alternative.

China has a very attractive approach in its cooperation with the countries in the region, ‘we stay out of your politics, all we care about is economy and trade.’ But what’s the likelihood that in future China’s interest will go beyond economic projects in Central Asia?

In my opinion, China will not be involved in the politics of Central Asia because it has many issues in the Asia-Pacific region (APR). They have very serious matters on the agenda. So the matters in our region will concern only the economy that is required for the implementation of the Silk Road Economic Belt [the Chinese government’s ambitious project that would deliver its goods to Western Europe across the Eurasian continent and bypassing Russia].  They need the opportunity to transport goods through the continent, so they need to build their transportation capacity from our region to Europe so that Europe is overwhelmed with Made in China goods. If they achieve this goal, the Chinese will deserve applause. In terms of military and politics, China directs great effort to ensure its positions in the Asia-Pacific region, so it cannot work to the utmost in all aspects of cooperation all along its border. Even China, which is very strong now, cannot pursue politics all around the world.

Who could challenge Russia’s role in Central Asia in terms of ideology?

Only religion can. Islam…. radicalisation occurs in all the Central Asia states. Russia - just as when the Russian Empire came to the region in the middle of the 19th century, and later in the Soviet Union - has tried to totally eliminate the factor of religion, and this attempt has failed. So now their main enemy is the Islamic factor, but, in my opinion, not everyone in Moscow understands this.

Central Asia
Economy
Connect with us