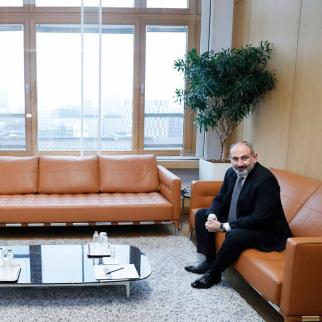 Armenian officials report growing interest from Russian citizens interesting in relocating to Armenia following the invasion of Ukraine, amid concerns that Western sanctions will soon impact their ability to work and travel.

Armenian minister of economy Vahan Kerobyan announced that “many [Russian] companies have applied and about a dozen companies have already relocated their businesses to Armenia” in the wake of the February 24 invasion.

Kerobyan explained that most of these businesses were from the IT sector.

“These are the companies that are directly linked to Western markets and due to current restrictions they are unable to work from their own country,” he said, adding that his department had set up a working group to support their relocation.

Staff.am, Armenia’s largest Armenian employment platform, reported receiving enquiries about relocation from about 300 individuals and over 20 companies in recent days. Most applicants were from Russia and also worked in the IT sector.

"I am fully aware of the economic consequences my country is going to face."

IT developer Ivan Grebenshchikov is one of those who have already left Russia to move to Armenia.

“It's been [nearly] a year since Russia started building up its troops along the border [of Ukraine],” he said. “We have been following all the developments since December and actively discussing moving to other country since mid-February.”

Fearing that the new sanctions against Russia might include travel bans for its citizens, Grebenshchikov and his wife left for Armenia on March 1.

“The situation was changing fast, flights to many countries have already been banned,” he continued. “There were only a few countries left where we could fly. And if they banned travelling to these countries too, it would be a disaster, we would feel trapped.”

Grebenshchikov said that he also opposed the war, explaining, “It’s completely wrong and not worth all the lives that [are being] lost.”

Grebenshchikov said that both he and his wife continued to work remotely and that Armenia had so far been a pleasant experience.

“It is not expensive to live in Armenia, the prices are almost the same as in Russia,” he continued. “Almost everyone speaks Russian, people are very friendly. Armenians are ready to help even without asking. Besides, we have good friends here.”

Yulia, not her real name, also moved to Armenia immediately after the invasion of Ukraine. She asked to remain anonymous because her elderly parents remained in Russia.

“My country started the war – that is the reason I left Russia,” she said. “I think it was the wrong move… I am fully aware of the economic consequences my country is going to face in the next ten years.”

She has continued to work remotely from Yerevan and has no intention to return any time soon.

“My parents are retired, and I think today the best way to take care of them is to work and earn money in other countries, this was the main reason why I decided to move here,” she concluded.

Armenia is considered a convenient and affordable option for relocation, given the widespread use of Russian and the close ties between the two countries.

Government agencies in Armenia as well as private sector companies are working to reassure potential newcomers from Russia over concerns about issues including the banking system, living costs, medical care and Russian-language schools for their children.

Numerous groups have also been set up on Facebook and Telegram to assist those who are interesting in moving to Armenia.

“In recent days, many Russian partners of our company have been talking about moving to Armenia, said Anna Beklyarova, from the Armenian IT company IT City. “They choose it for several reasons: the IT sector is well developed, the banking and taxation policies are acceptable, it is possible to work remotely and finally, Armenia is a country with beautiful nature and people.”

She said that one of their partner companies had already moved to Armenia along with employees and their families who were currently staying in a Yerevan hotel in until they find appropriate accommodation and office space.

Companies like IT City are welcoming the potential influx of IT companies and skilled labour from Russia, hoping that this will have a positive impact on the sector’s development and improve economic performance.

However, others warn that the ongoing conflict will be extremely damaging for the Armenian economy.

“The negative consequences of the Russian-Ukrainian war and the sanctions imposed against Russia will be more obvious for Armenia than the possible benefits,” said Armen Ktoyan, an expert at the National Centre for Public Policy Research. He noted that most direct investment in Armenia came from Russian capital, and that the conflict might also affect decisions on foreign investments.

Problems with the Russian economy had a clear knock-one effect for Armenia, Ktoyan continued.

“It will affect the volume of remittance transfers to Armenia from our fellow citizens who work in Russia. The amount will decrease significantly - we are talking about 800-900 million US dollars. This will lead to a decrease in the purchasing power of Armenia’s population. It will also affect exports from Armenia to Russia, which is our major trading partner. Russia is a leading export market for Armenia and with the devaluation of the rouble the Armenian goods will become more expensive in Russia and the goods imported from Russia will become cheaper in Armenia. In both cases, Armenian products will become less competitive.”

Ktoyan said that much depended on the duration of the conflict, as well as its eventual resolution.

“Now everyone is in a state of expectation: if Russia is drawn into a longer military confrontation, this will imply completely different realities,” he said. “If solutions are found in the coming days, the list of sanctions might not be expanded further or might not be as painful as in the case of long-lasting conflict.”