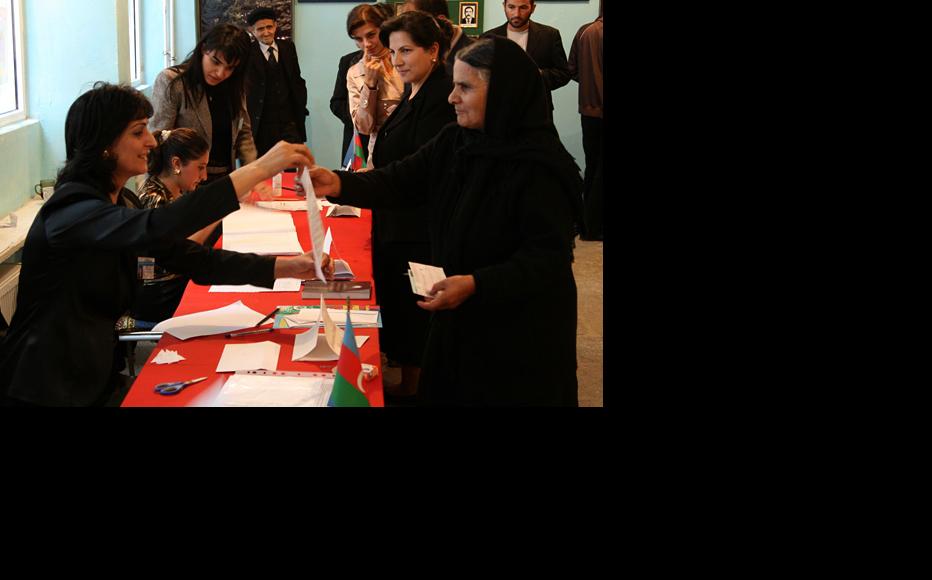 Voting under way at a polling station in Surakhani district. (Photo: Shahin Rzayev) 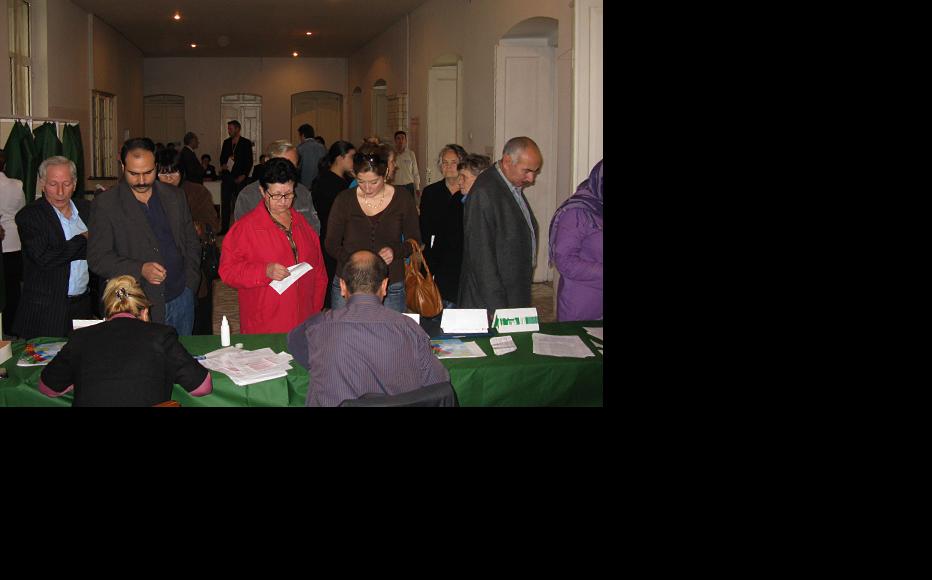 The ruling party in Azerbaijan has won an overwhelming majority in a parliamentary election in which the opposition failed to win a single seat.

According to preliminary results from the Central Election Commission, CEC, 74 seats went to candidates from the governing Yeni Azerbaijan party, 13 to other pro-government parties, and ten to independents, who tend to align themselves with the authorities in votes.

The Popular Front-Musavat opposition bloc failed to win any seats and complained of numerous violations of electoral procedures, allegations that were backed by international observers from bodies like the Organisation for Security and Cooperation in Europe, OSCE.

“The conduct of these elections overall was not sufficient to constitute meaningful progress in the democratic development of the country,” the OSCE observers’ report said. “The Central Election Commission overall administered the technical aspects of the electoral process well. But limitations of media freedom and freedom of assembly, and a deficient candidate registration process further weakened the opposition and made vibrant political discourse almost impossible.”

The joint leaders of the Popular Front-Musavat said they would campaign for the result to be annulled, but the CEC’s head disagreed, saying that the poll had been characterised by its plurality and openness.

“Not a single out-of-the-ordinary case that might affect the election result has been brought to the CEC,” commission chairman Mazahir Panahov said. “The election was held in full compliance with the requirements of the electoral code. If there are any complaints, then we will of course examine them in accordance with the law.”

Turnout was put at more than 50 per cent, eight percentage points higher than in the 2005 election.

Opposition supporters complained that voters were being allowed to cast several ballots, while their own observers were prevented from watching the process in some cases. Six people were detained until evening in the Surakhani district, where Popular Front head Ali Kerimli was standing as a candidate.

Afet Suleymanova, a pensioner in Kerimli’s constituency, said representatives of the municipal government knocked on her door and offered her a lift to the polls. On the way there, she and her fellow-passengers were told they must vote for an independent candidate who had government support.

“I stayed quiet on the bus, but when I got into the voting booth, I voted for Kerimlil,” Suleymanova said.

Similar allegations were made by some of the foreign election monitors present at polling stations.

No such criticism was heard from the observers sent by other former Soviet states in the Commonwealth of Independent States, CIS. Sergei Lebedev, head of the CIS mission, said the election was fine, and accused its western critics of hypocrisy.

“We propose eliminating the procedure of marking voters’ fingers, since this humiliates people. We all adhere to this opinion, since we think you shouldn’t give in to pressure from states that suggest using this procedure but don’t do so themselves,” Lebedev told the news agency Novosti Azerbaijan.

Some journalists, however, were more inclined to side with the monitors from western countries.

Nushaba Fatullayeva, a reporter for Radio Liberty, said she filmed a man voting 14 times at a polling station in the Yasamal district near the capital Baku. When she asked officials present to comment, they threatened to take her camera away.

“On discovering this violation, I drew the attention of the local electoral commission chairman to it. He then very rudely demanded my film. They blocked me off in the corridor, and it was only when the radio station’s bureau chief intervened and the head of the district [election] commission arrived that I was able to leave the polling station.”

Another Radio Liberty reporter, Aygun Muradkhanli, was expelled from a polling station and detained by police for 90 minutes.

Independent experts said the authorities had downplayed coverage of the election so much that the public was unlikely to care about breaches of the law.

“This election was the most boring in history; the government tried to make people disaffected with it,” Boyukaga Agayev, director of the South Caucasus think-tank, said. “This, along with the curtailment of the campaigning period, the denial of free airtime, the ban on holding protests, and so on, has produced a rubber-stamp parliament that will automatically approved bills drafted by the presidential administration.”

This view resonated with Aliya Haqverdi, a 30-year-old marketing specialist who did not bother to vote.

“I didn’t have sufficient reason to leave the house on a weekend. I was completely unaware what policies the candidates in our constituency had, although I did try to find out. And voting merely on the basis of faces on posters would be pointless,” she said.

The election did result in a sharp increase in the number of women in parliament, from 13 to 20. Among them is Mehriban Aliyeva, the wife of President Ilham Aliyev. The CEC said she received 94.5 per cent of the vote in her constituency, the highest recorded anywhere.