High-level meetings after a long break offer hope of new momentum in long-running negotiations on Karabakh.

High-level meetings after a long break offer hope of new momentum in long-running negotiations on Karabakh. 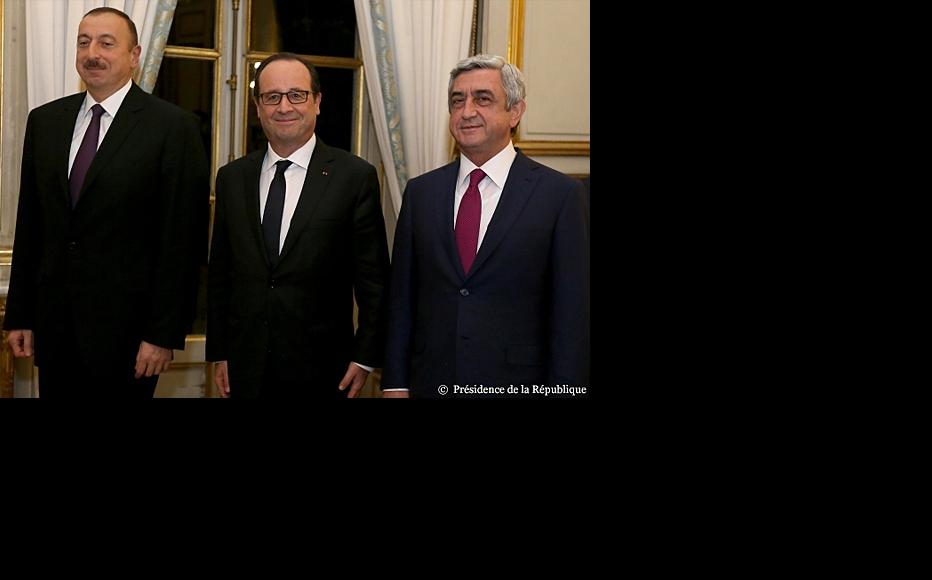 A burst of diplomatic activity appears to have prevented a wave of skirmishes between Azerbaijani and Armenian forces from tipping over into conflict, and just maybe, breathed new life into a peace process that appeared to be going nowhere.

The presidents of Armenia and Azerbaijan have met three times in as many months, after a long break. They last met in November 2013, and before that in January 2012. They may not have agreed anything specific, but analysts on both sides concur that the simple fact of meeting was important to restoring and maintaining stability.

After Armenians living in Nagorny Karabakh demanded to secede from Azerbaijan in the late Soviet period, a war broke out that ended only in 1994 with a ceasefire but no peace deal. Since then, Karabakh and adjoining territories have been governed by an Armenian administration that claims independence. Azerbaijan refuses to recognise or talk to the Karabakh administration, and negotiations mediated by the OSCE are thus between the states of Azerbaijan and Armenia.

Years of negotiations have come to little because the two sides are so far apart in their visions of Karabakh’s future – independence versus reintegration – that it is hard to discuss even preliminary steps like refugee return or restitution.

In the meantime, sporadic sniper fire and occasional raids are constant features of life both on the frontier between Azerbaijan and Armenia and along the “line of control” which forms a front-line boundary around Nagorny Karabakh.

This summer saw an alarming rise in such incidents and in the inevitable military and civilian casualties. So much so that commentators were beginning to worry that the situation was sliding closer to war.

On August 10, however, Azerbaijani president Ilham Aliyev and his Armenian counterpart Serzh Sargsyan met face-to-face in a meeting engineered by Russia’s Vladimir Putin in Sochi.  In formal terms, there was no progress but the situation on the ground subsided.

This meeting was Putin’s own initiative and appeared to be a departure from the OSCE negotiating format, in which the Minsk Group is led by three co-chairs – diplomats from Russia, the United States and France.

On September 5, US Secretary of State John Kerry met the Azerbaijani and Armenian presidents during the NATO summit in Wales.

Most recently, the two leaders met again on October 27, this time in Paris at the behest of French president Francois Hollande. The three Minsk Group co-chairs were present.

Again there was little visible progress apart from a general willingness to talk – no small thing given the belligerent language of recent months.

Sargsyan’s press office said he and Aliyev agreed to hold further meeting, and that “there is no alternative to a peaceful resolution of the conflict”. They also agreed on “the importance of continuing dialogue within the co-chaired OSCE Minsk Group framework”.

The Minsk Group diplomats followed up with meetings with officials in Baku and Yerevan, which also served to underline that the OSCE remains the lead negotiating mechanism.

According to Richard Giragosian, director of the Regional Studies Institute in Yerevan, this was the key point to come out of the Paris meeting. After Putin’s unilateral meeting, “the other OSCE Minsk Group co-chairs have been eager to catch up and determined to reassert their own position”.

WHAT HAPPENED IN PARIS

After the talks in France, Armenian foreign minister Edward Nalbandyan said the discussion had been “useful, frank and constructive”.

His Azerbaijani counterpart Elmar Mammadyarov said less, just that all such meetings between the two leaders were “positive” as they made it possible to “understand the mood of the opposing side in order to promote the process of resolving the conflict”.

“One of the significant results of the meeting was the call by French president Francois Hollande to Armenia and Azerbaijan, as the conflicting sides, to start work on a draft grand peace treaty,” Mammadyarov told the Trend.az news site. “Azerbaijan has repeatedly expressed a readiness to start this work.”

For his part, Nalbandyan indicated that it was far too early to consider a comprehensive treaty. “Since final agreement has yet to be achieved on basic principles, this issue cannot be discussed at the moment,” he said.

The Minsk Group would like to see the “Madrid Principles”, a package of ideas on the table since 2007, become the basis for future negotiations on a final settlement on Karabakh. Under the principles, Karabakh would be given an interim status pending a referendum, while Azerbaijan would regain adjoining territories now under Armenian control. Refugees would be able to return home, a land corridor between Karabakh and Armenia would be maintained, and the international community would deploy peacekeepers.

There is much disagreement about the details, especially about how the different elements would be phased.

Noting that Hollande suggested creating confidence-building measures including a system for investigating individual shooting incidents and a mutual agreement to pull snipers back from front-line positions, Nalbandyan said this was something the authorities in Armenia and Karabakh had always supported. By contrast, he said, Azerbaijan held the view that confidence-building measures should only come after substantive progress had been made in negotiations. Nalbandyan argued that this did not make sense, since “if there is progress, if we reach some decisions, then I don’t think confidence building measures will be so urgently needed.

In response, Mammadyarov said that the need for snipers would disappear when Armenian troops were no longer deployed on Azerbaijani soil.

Mammadyarov said President Aliyev reiterated the Azerbaijani position on the timing of the measures that would precede a final agreement. Before anything else happened, Armenian forces should withdraw from the “occupied territories” – meaning districts outside Karabakh that have been controlled by it. “As soon as this demand of Azerbaijan, which is clearly supported by the OSCE Minsk Group co-chairs as well and is reflected in United Nations Security Council resolutions, is fulfilled, there will be great opportunities to ensure security in the region, to open borders and communications and agree on matters relating to confidence-building measures,” the minister said.

Farrukh Mamedov, head of the Institute for NATO Cooperation in Baku, told the Yeni Musavat newspaper that this meant “in the first phase, seven districts are liberated, and in return for maintaining the Lachin corridor [connecting Armenia and Karabakh], a corridor is opened between Megri and Nakhichevan”. Azerbaijan has an autonomous republic, Nakhichevan, that is entirely cut off from the rest of the country by Armenia.

He added, “Armenia isn’t entirely happy with that plan, since – as the aggressor – it is required to take the first concrete step”.

While everyone agrees that the round of high-level talks was a good thing, commentators disagreed on whether this meant a fresh start for the Karabakh talks process, and whether the Minsk Group was still the right forum for this.

In Nagorny Karabakh, officials said they had not been expecting much to come out of the Paris meeting, but they welcomed it and similar talks as a way of maintaining the ceasefire.

At the same time, David Babayan, spokesman for Karabakh’s president, said that “no resolution of the conflict is possible unless the key side – Artsakh [Karabakh] takes part in it fully.”

In Yerevan, Giragosian said the meeting should be seen as a success in terms of where things currently stood.

“Аlthough the Paris meeting failed to [deliver] any tangible breakthrough, it did meet already lowered expectations, as the latest element in a 'back-to-basics’ diplomatic strategy driven by two minimal goals – to keep the peace process alive and to prevent the outbreak of war over Karabakh,” he said.

In Baku, journalist and political commentator Rizvan Huseynov told IWPR he remained “hugely sceptical” about the Minsk Group’s value and hence the prospects for an eventual peace deal.

“When one considers the activities of the three OSCE Minsk Group countries, the first thing that comes into one’s head is the Russian fable by Ivan Krylov about a swan, a pike and a crayfish that are pulling a cart. Each of them pulls in its own direction, and the result is they don’t move it at all,” he said.

Sergei Minasysan, deputy director of the Caucasus Institute in Yerevan, was more upbeat about the OSCE grouping, noting that “given the tension between Russia and the West, none of the Minsk Group co-chairs wants to have yet another headache, so we are seeing consensus between Russia, the US and France on the negotiations process.

Minasyan is also optimistic that the peace process could now move forward.

“Overall, there are the preconditions for some developments in the talks process… negotiations starting from zero, on reducing tensions on the line of contact between armed forces and creating confidence-building mechanisms,” he said. “That is the point zero without which it will be impossible to move on to further stages.”

Yekaterina Poghosyan is a reporter with the Mediamax news agency in Armenia. Shahin Rzaev is IWPR country director in Azerbaijan.