IWPR story about her life in Azerbaijan helps bring about reunion in France with relatives she had not seen for over 60 years.

IWPR story about her life in Azerbaijan helps bring about reunion in France with relatives she had not seen for over 60 years. 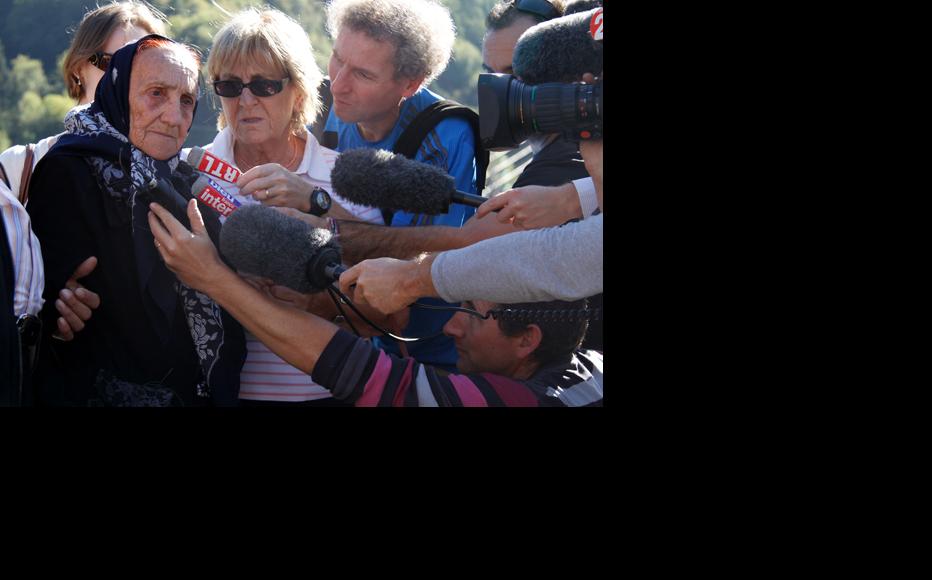 Yvonne Botteau Jacques makes headlines on her return to France. (Photo: Sabuhi Mammadli)
The link has been copied

Yvonne Botteau Jacques, an 83-year-old French-born woman stranded in Azerbaijan whose desire to go home was revealed by IWPR, finally returned to France earlier this month, met at the airport by her long-lost relatives.

After IWPR described her plight (Stranded by Love in Azerbaijan) – she couldn’t afford to go home and the French embassy was unable to help – donors from the European Azerbaijan Society stepped in, and flew her and this IWPR reporter to France.

She landed at Charles de Gaulle airport on October 9, along with her son Farahim Shirmammadov, to be greeted by her cousin Marceille Gregoire, her cousin’s son Thomas, her niece Beatrice Botteau, and a cousin also called Yvonne.

After passing through passport control, she stopped suddenly and muttered to herself. Her eyes were roaming and she shook with the shock of being on French soil for the first time since her and her Azeri husband left after World War Two.

They had met and fallen in love when he fought for the French resistance, having fled a prisoner of war camp, and they left for his homeland together.

Several of her relatives cried with the shock of seeing her, before taking her to Lyons, where far-flung members of her family gathered to meet her. Around 50 people were present in the Gregoires’ home, to give her flowers and presents.

“I have searched for her so many years. In 1993, I prepared all the documents, to invite her to France. I needed just one more document and I went to Monaco to get it, but could not find anything. Thanks be to God that destiny has smiled on the Botteau family,” said Marceille, when greeting the guests.

“Today we are together with our dear Yvonne and we will never lose each other again.”

On the next day, we travelled to the village of Lafayette, where she grew up, and even more relatives awaited her. Several print and television journalists were waiting for us there too.

First of all we visited the village of Ched, which adjoins Lafayette and where around 100 people had gathered in the cemetery, including relatives, locals, reporters and officials. Someone shouted “Yvo, Yvo”, and a woman of about 70 threw herself at Yvonne.

They embraced, and it turned out the woman was Lorette - the daughter of Yvonne’s best friend Denise, and Yvonne had recognised her immediately since she resembled her mother so closely.

The group then walked to the gates of the cemetery, where Yvonne stood for around ten minutes, occasionally looking up to the Alps. Marceille put her head on Yvonne’s shoulder and wept. Yvonne’s son Farahim wept also, but Yvonne was calm.

It was clear where she needed to go since all the cameras and journalists were waiting at the graves of Jean, Marie and Paul, her parents and her brother.

She read the names on the graves, then kissed them. For the first time, she began to cry, and wept uncontrollably.

At two o’clock the group went to the mayor’s office in the nearby town of Passy, where the mayor gave her a copy of her marriage certificate from 1947 certifying that she had married the resistance fighter Shammad Shirmammadov.

“How important is this paper to you?” asked a French journalist from RTL television.

“I came for love and I have found it,” she answered.

She was followed around by crews from four different television channels, as well as print journalists from AFP, and several newspapers.

The next day the group visited her father’s home in Lafayette. The current owner – called Willy – was very glad to meet the former owner’s daughter, kissed her hand and asked us all in.

She climbed up to the first floor, turned left and opened the door.

“This was my room. And my mum and dad’s room was on the ground floor,” she said.

“Here in the corner was my puppet. She was very big. I played with her until I was 17,” she said with a laugh.

“Before I went off with Shammad I asked my mum to give the puppet to an orphan who was our neighbour.”

Yvonne spent five days in Lyons and Lafayette, before the whole group returned to Paris. After another two days there, the group flew back to Baku.

“All my relatives, even non-relatives who heard about my fate, were so kind to me. I will be grateful to the end of my days to Sabuhi Mammadli who wrote about me for IWPR, thanks to which the world heard about my fate, and of course also to the European Azerbaijan Society, which organised this trip. Now I can die with a light heart.”

Azerbaijan
Children
Connect with us