Farmers are getting help cultivating fields that the war had forced them to abandon.

Farmers are getting help cultivating fields that the war had forced them to abandon. 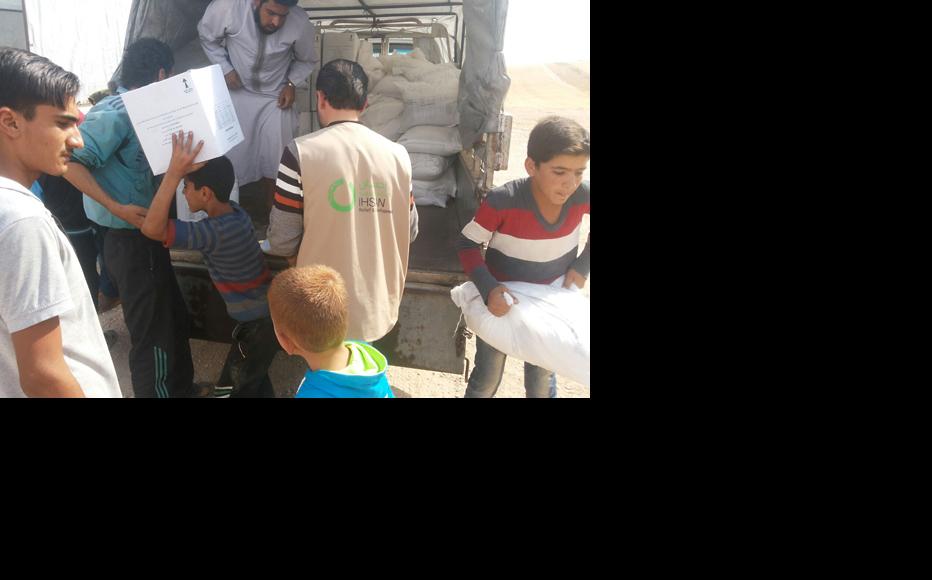 Relief packages from the Syrian Business Forum are filled with seeds, fertilizer and growth nutrients. (Photo: Razan al-Sayed)
The link has been copied

Abu Mahmud goes to work on his farm each morning, excited that his 45-acres of land are once again a luscious green.

Like hundreds of other farmers in Maarat al-Numan, Abu Mahmud was unable to cultivate his land during the first four years of the Syrian revolution. The hike in fuel, fertiliser, and labour prices forced him to abandon his fields, which soon turned to a wasteland.

“When the power plant supplying our village with electricity was damaged, I could no longer irrigate my land,” he said.

“I always felt a deep sadness when I looked at my uncultivated fields and saw what had become of them.”

But life has improved for the 48 year-old due to an initiative supporting local agriculture from the Syrian Business Forum (SBF).

The SBF installed an electricity generator in Maarat al-Numan and dug an artesian well for irrigation. It also provided local farmers with seeds and fertiliser for their lands.

Abu Mahmud told Damascus Bureau that he and his eight children no longer faced a life of poverty. Thanks to the SBF, he can once again sow his land and reap the benefits.

Launched in January 2013, the SBF has since launched over 50 projects in and around Idlib, including the provision of wells, agricultural projects, women’s centres and children’s sports facilities.

Its director, Mohammed al-Masri, told Damascus Bureau that the SBF had branches in regions that were not under the control of either the Syrian government or the Islamic State (IS).

“We have three offices in Syria,” he explained. “The first, which is named Ihsan, deals with development projects. The second, named Busla, is responsible for training human resources and empowering women. The third, named Fanar, deals with relief projects,” the 38 year-old said.

So far branches have been set up in Idlib, Latakia, al-Atareb and Daraa, with offices in Homs and Aleppo on the way.

“Each head office has a workforce of 40 staff members. Four of them are employed on a continuing basis, while the rest are on one-year contracts,” said Abu Mohammed, who works in Idlib’s main office.

Employees are paid a monthly wage of between 350 and 400 US dollars, he added.

The SBA works in partnership with international organisations such as GOAL, BINAA, and the Food and Agriculture Organisation of the United Nations (FAO).

It also works with local councils which act as intermediaries between its offices and beneficiaries. Based on their local knowledge of residents and the situation on the ground, councils save the SBF time and resources when dealing with individuals.

“The local council collects project requests from local residents and submits its recommendations to the SBF on a monthly basis. The SBF then visits the houses and lands concerned and decides which projects it will fund,” he said.

The largest agricultural project the SBF is involved in is a joint venture with GOAL and FAO that covers Khan Sheykhun, Kfar Nabel and Maarat al-Numan.

The project distributes packages of free seeds, fertilisers and soil nutrients to farmers. Beneficiaries are chosen based on their financial situation.

“We sponsor farmers who have no source of income and own a piece of land or a large plot they are unable to cultivate,” said al-Masri.

The SBF provides these farmers with everything they need to rehabilitate their land so as to be able to support themselves.

Other major projects the SBF is involved in include building industrial waste-disposal plants, installing bakeries and rebuilding houses in Khan Sheykhun, Hass, al-Mghara and al-Dana.

Abu Hussam from al-Ghadfa village, told Damascus Bureau how much easier life had become since the SBF installed a bakery in his village. The 35 year-old is no longer forced to travel to neighbouring villages to buy bread, and he is pleased with the reasonable prices and good quality of the product.

Umm Amjad from Khan Sheykhun, meanwhile, described the benefits of a local irrigation and drinking waterproject supported by the SBF.

“Battles and airstrikes destroyed most of Khan Sheykhun’s infrastructure, including the water pipes. The SBF dug artesian wells and helped us install a new network of pipes which carry drinking water to our houses,” the 41 year-old said.

SBF director al-Masri said that the aim of the project was to alleviate the suffering of the Syrian people.

“Our main concern is to fund development projects that will allow beneficiaries to improve their financial situation in the long run, and ultimately begin to support themselves,” he said.

“As the proverb goes: give a man a fish and feed him for a day; teach a man to fish and he never goes hungry.”

Syria
Reconstruction
Connect with us