Rebellion led by deputy defence minister came as a surprise.

Rebellion led by deputy defence minister came as a surprise. 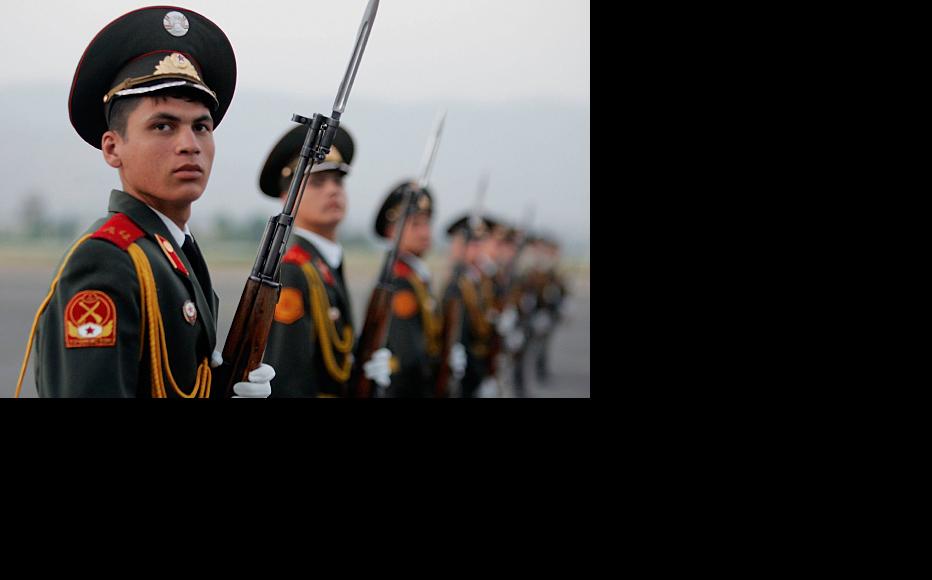 Twenty-seven people have died in recent days as government forces in Tajikistan tackle a rebellion led by a top defence official.

On September 4, residents of the capital Dushanbe airport awoke to the sound of automatic gunfire and police sirens. The interior ministry said a police officers stationed on the road to the airport and a police station  in the nearby town of Vahdat came under  attack .  It said eight policemen died and nine of the attackers were killed in the two raids. The rebels also entered a defence ministry building, apparently unopposed, and raided its arms store.

The ministry statement accused Nazarzoda of being behind the attacks, saying he had now been dismissed as deputy defence minister.

Despite a security clampdown, more violence followed the next day with an attack on a traffic police post on the outskirts of Dushanbe. One policemen died and several were injured.

The interior ministry said Nazarzoda and a few dozen armed supporters were now surrounded in the Romit valley, some 50 kilometres to the east of Dushanbe. As of September 9, around 70 of them had been captured and a total of 18 killed, according to the Russian news agency TASS. The security operation was continuing when this report was published.

WHAT SPARKED THE VIOLENCE?

Officials and commentators have yet to come up with a satisfactory explanation of why a senior government minister who seemed secure in his post might go off the rails like this.

The sequence of events that led up to this outbreak of violence, as well as the general’s personal motives, remain obscure. But this case serves as a reminder that the general calm in Tajikistan is periodically punctuated by rebellions, often involving figures from the civil war of the early 1990s and reawakening memories of chaos and bloodshed.

In its statement on Nazarzoda's role in these events, the interior ministry said he  was a member of the recently-banned Islamic Rebirth Party (IRP).

A statement purporting to be from the general said he and other officers acted after hearing that the government planned to purge senior military commanders who belonged to the IRP. Rather than face “shameful arrest and possible death under torture”, they and men loyal to them seized weapons and broke out of the city.

The IRP later denied that Nazarzoda was a member, saying this was just the latest in a series of attempts to damage its reputation.

The IRP is Tajikistan’s major opposition party and Central Asia’s only legal Islamic political group. This is a legacy of the 1992-97 civil war, in which the IRP was the leading force in a guerrilla group that battled the Rahmon administration. In a peace deal brokered by Russia and Iran, the IRP agreed to disarm its men in exchange for political legitimacy and a share of government positions.

In the years since then, the IRP has seen most of its members edged out of their posts, but it has continued to contest elections. In March, however, it lost the two parliamentary seats it held in a ballot of questionable fairness. Both before and after the election, it was subjected to a concerted smear campaign and members were pressured to leave.

On August 28, the Tajik justice ministry gave the IRP ten days to close down, days after its national and local headquarters had been shut.

Although the IRP has been a force for moderation in both its politics and religious views, the government is now trying to link it to Islamic State, which is increasingly recruiting in Tajikistan. A recent official statement suggested that individuals suspected of hanging up a black Islamic State banner were IRP members.

Defence expert Parviz Rasulov is familiar with Nazarzoda’s past and says he was indeed one of those appointed under the 30 per cent quota deal that helped end the civil war in 1997. But according to Rasulov, Nazarzoda was not involved in the insurgency – he was not even in Tajikistan during those years. Instead, he was asked by the IRP leadership to take command of a rebel unit as the peace deal was being signed, in June 1997 in order to help integrate it into the government army.

“I know for a fact that he is not a member of the IRP,” Rasulov said.

So what made General Nazarzoda turn to mutiny?

Rasulov thinks  he became unsettled when he began to suspect the campaign against the IRP was going to extend to anyone in the armed forces with connections to the civil war-era insurgency.

Another analyst, who did not want to be named, recalled the fate of two high-profile figures who ended up in jail, one-time interior minister Yaqub Salimov and presidential guard commander Ghafur Mirzoev. Both fought in the civil war, siding with the Rahmon government rather than with the rebels.

“Nazarzoda did want not to go the same way as Ghafur Mirzoev and Yaqub Salimov, and it may be that he took action when he realised there were plans in train against him,” the analyst said.

The rebellion of this top defence official is another blow to Tajikistan’s security forces, coming only months after the commander of the police’s elite OMON force defected to Islamic State in Syria. Colonel Gulmurod Halimov appeared on video footage proclaiming his allegiance to Islamic State and pledging to bring jihad to Tajikistan.

[Correction, clarifying that Nazarzoda was dismissed as deputy defence minister after the attacks, not before.]

Tajikistan
Conflict
Connect with us