Officials want to re-house them on the outskirts of the city – but they say they will have no work.

Officials want to re-house them on the outskirts of the city – but they say they will have no work. 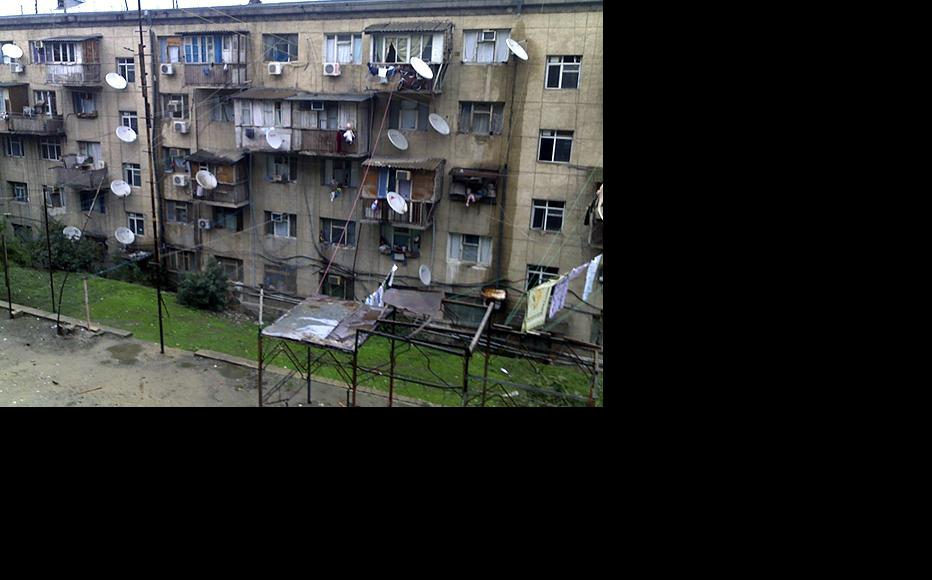 A student hostel occupied by refugees in the centre of Baku. (Photo: Ayten Farhadova)
The link has been copied

A programme to free up student hostels in the centre of Baku is being torpedoed by the refusal of refugees living in them to move out.

The Azerbaijan government had been working since the early 1990s to provide decent accommodation for the hundreds of thousands of people forced to flee Nagorny Karabakh and neighbouring regions when they were seized by Armenian forces.

People living in tents and cabins have all been moved, and officials’ attention has transferred to sanatoria and student hostels used as homes by refugees since 1993.

Some 782 such buildings in Baku are currently occupied by refugees, with 242 of them hostels, and 72 belonging to the education ministry.

Some 6,100 families numbering 24,000 people currently live in the students’ accommodation.

“We have lived here for 17 years here. We’ve organised our business near the hostel. We just earn enough for bread. If we are moved to the edge of town [where the authorities want to re-house us], where will we work? How will we support our families? We want houses for us to be built not far from the hostels where we live now,” said Mirhuseyn Karimov, a 62-year-old refugees from the occupied Zengilan region, who sells fruit and vegetables in a market by the hostel where he lives.

“Or let them free our lands from occupation, and we can go home.”

The government promised at the start of the year to empty the buildings, where the refugees live in very difficult conditions, but clearly did not count on opposition from men like him.

“In 2010, from the State Oil Fund 80 million manats (100 million US dollars) are assigned for building residences for those expelled from the regions occupied by the Armenians. Together with other money assigned for this purpose, the total sum comes to 100 million manats. This year, we will definitely start the relocation of people from the hostels,” said Ali Hasanov, head of the State Committee for Refugees and Forced Migrants, at the start of this year.

Some 200,000 people have already been resettled from tents into flats and new residential districts, and he said the next step would be to free up hostels belonging to universities.

“This is a major process, and it will take several years. We have already bought patches of land for building houses and for resettling some of the displaced people who currently live in student hostels. At the moment we are drawing up plans for the houses. We are trying to provide for the needs of every family.”

The first hostels were supposed to be emptied by the beginning of the academic year, but this has not happened, much to the displeasure of the university authorities. Abel Maharramov, rector of the Baku State University, BGU, said that 7,000 students from the provinces of Azerbaijan and abroad are forced to rent flats to live in since there are not spare rooms in their hostels.

“Today, 6,813 foreign students study in Azerbaijan, of whom around 1,500 study at BGU, and all of them have to rent flats. This is very expensive for them,” he said, saying that foreigners are generally charged double the rent paid by locals.

The details were confirmed by Rza Jabbarov, director of student accommodation at the university, “BGU has eight hostels. Some 95 per cent of the rooms are occupied by displaced people, and only five per cent by students. In all of BGU’s hostels, there are 733 families, numbering 2,736 people from the occupied regions, and only 115 students.”

The buildings are in a bad state. It is always noisy because of the number of people living in them, and the roofs leak if it rains. There is only one kitchen on every floor, and it is used by ten to 12 families, and there is only one bathroom for each building.

“There are decent conditions in only two buildings. There each flat has its own kitchen and bathroom. But even there, because they have not been repaired for so long, things could be better,” Jabarrov said.

“At the start of every academic year, hundreds of students appeal to us. And we can give only 35 or 40 of them places. We have to house four students in rooms intended for three, and often students see the conditions and refuse to live there themselves, preferring to rent a flat despite the expense. You can understand them doing so since facilities in the hostels are, to put it mildly, minimal.”

Sanan Huseynov, spokesman for the State Committee for Refugees and Forced Migrants, said the land set aside for building new settlements for the refugees are often in the Apsheron region outside of Baku itself.

“These people are living and working mainly in hostels in the centre of Baku, therefore they don’t want to move to the outskirts,” he said.

And the refugees believe they have earned better treatment.

“We have lived through such horrors. We have lost our houses, our lands, our relatives. The graves of our relatives are in the hands of the Armenians. I lost my own brother; he was killed before my eyes. Our pain is just starting to pass, and we are starting to think about how our children will do,” said a 57-year-old woman from the Aghdam region.

“You think it’s been easy and pleasant to live for 17 years in this noise, in the dirt, in such terrible conditions? Of course we expect an improvement in our conditions from being moved - not a worsening.”