Swanky cars and iPhones for government staff seen as excessive at a time when money is tight.

Swanky cars and iPhones for government staff seen as excessive at a time when money is tight. 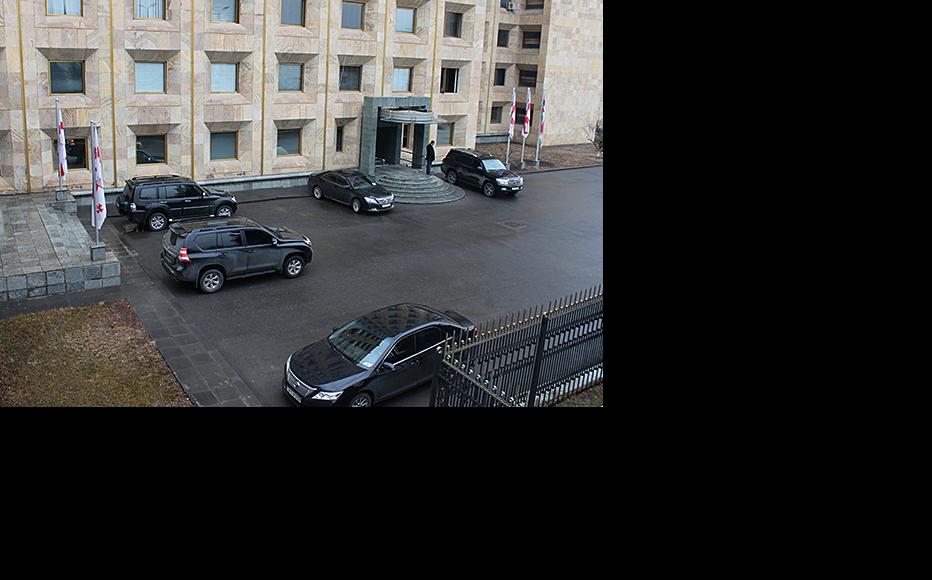 Georgian officials are fond of up-market vehicles, in black if possible. These ones are outside the State Chancellory. (Photo: IWPR)
The link has been copied

Georgian officials who buy top-of-the-range cars out of the public purse have found themselves uncomfortably in the public eye after a row that erupted last month.

Matters came to a head in December, when the elected assembly of the Ajara region of southwest Georgia admitted paying 83,300 laris (47,600 US dollars) for an upmarket four-wheel-drive vehicle.

Georgia’s deputy prime minister Kakha Kaladze, who is also energy minister, took the opportunity to criticise the chairman of the Ajara assembly, Avtandil Beridze. Both men are members of the ruling Georgian Dream coalition that came to power in 2012.

“It’s clear that Avtandil Beridze does not understand what a great responsibility the citizens of Georgia placed on the Georgian Dream coalition and on its leaders after the election. It’s their duty is to worry about the people, not about their own comfort,” Kaladze said in a statement. “We share the public’s concerns, although we also stress that we have no objections to officials being provided with everything they need to carry out their duties effectively. But that has to be done intelligently, in line with the realities in this country.”

However, that was not enough to quell a wave of popular anger stirred up by a string of similar cases.

The chief prosecutor’s office, for instance, decided to splash out on a Lexus limousine costing 174,600 laris – more than twice the price of the offending car in Ajara. Then Irina Imerlishvili, secretary of the National Security Council, refused to use her predecessor Giga Bokeria’s car, and instead bought a new Toyota Landcruiser for 78,241 laris.

“Bokeria’s car smelled of cigarettes,” she said when asked to justify the outlay on television. “This is an official car which will remain the property of the Security Council.”

The register of state purchases showed that Imerlishvili had also bought an Apple computer and an iPhone. Questioned about this, she said she needed high levels of security to work with confidential documents.

The Georgian Young Lawyers’ Association (GYLA) has been looking into state tenders, and has found that since it was elected in October 2012, the government has bought 768 cars and has spent 264,000 laris on mobile phones alone.

The interior ministry alone has issued 15 tenders for new furniture, spending more than a million laris since March last year. Local government offices in many regions have issued similar tenders.

The spending spree is seen as inappropriate by those Georgians who are struggling to get by.

“The government of a country where 40 per cent of the population live on the poverty line should not permit itself such luxury. We didn’t elect this government for it to think about its own comfort above all else,” Lia Sarjvelidze, a 48-year-old Tbilisi resident, told IWPR.

“The current government has continued its practices by inertia,” he told the assembled journalists, adding that Bidzina Ivanishvili, former prime minister and billionaire creator of Georgian Dream, had insisted that new rules be drawn up.

“Expensive cars will only be bought for those who need them,” Garibashvili said. “I do want you to understand, though, that some officials need to have expensive cars for reasons of etiquette.”

Meanwhile, representatives of the last government, in the shape of the United National Movement now in opposition, were swift to make some mileage out of its successors’ discomfort, without mentioning any spending they might have done in their time.

“This shows that the government has been inconsistent in meeting its election promises,” a statement from the party said. “What is even more worrying is that it is happening not at a time when the economy is growing, as has been typical of the last few years, but when the budget has a deficit of 800 million laris… poverty and unemployment are rising, and the government has decided to take on new debt.”

The party added that pensions were being frozen in 2014, the first time this had happened in some years, yet government officials were getting big pay rises.

Sulkhan Saladze, a lawyer with GYLA, said the legal structure for state tenders needed to change in order to stop officials spending money in this way.

At the moment, he said, “It’s down to the conscience of an official how much budget money gets spent. We have no documents stating why they might need a specific brand or model of car. There are basically no assessments of the justifications of specific purchases.”

“There must be laws regulating how often cars are replaced, what kind of car a head of a department needs to carry out his duties, and the maximum sum the state will pay for it. Officials should not decide these matters by themselves,” he said.

“In about a month’s time, the regulations will be ready and all ministries will abide by them,” he told IWPR.

Manana Vardiashvili works for the Liberali magazine in Georgia.

Georgia
Social justice
Connect with us