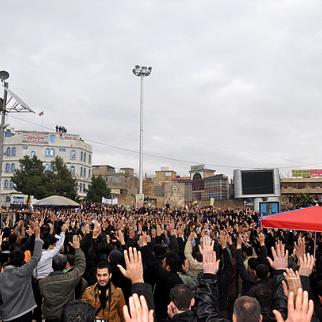 Protests on February 22 in the centre of Sulaimaniyah, which demonstrators have dubbed Freedom Square. (Photo: Ara Ibrahim) 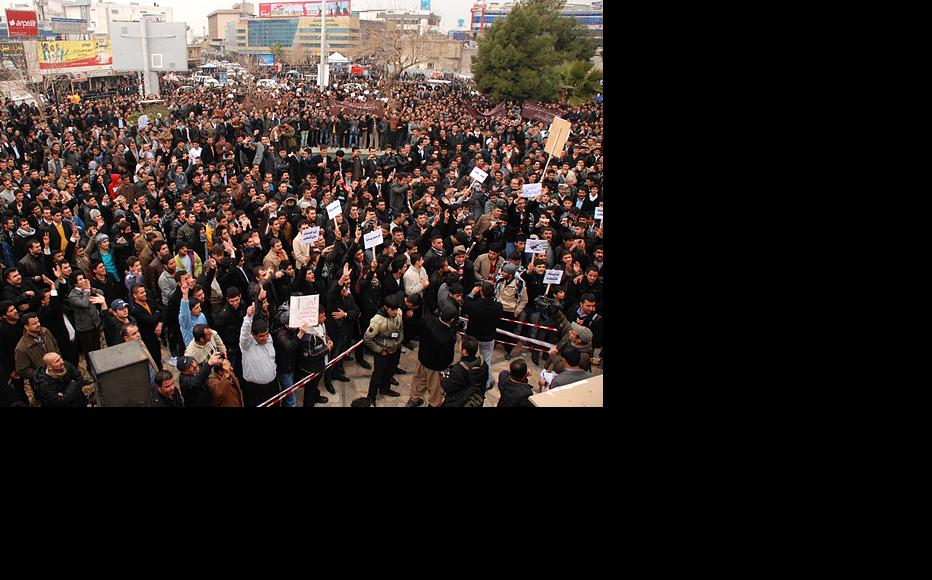 Hundreds of people demonstrate outside of the Kurdistan Democratic Party offices in Sulaimaniyah on February 17. (Photo: Sartep Osman/Metrography)
The link has been copied

Protests about poor services, corruption and unemployment have erupted in Iraq, where at least six people were killed and hundreds injured in local demonstrations this week.

Scattered rallies held across Iraq in recent weeks, with residents apparently emboldened by the uprisings in Tunisia and Egypt, have now spread across the country and been met with a harsh response.

Twelve of Iraq’s 18 provinces have witnessed demonstrations, and bloody protests rocked the eastern city of Kut and the Kurdish city of Sulaimaniyah, where troops were deployed following a violent demonstration.

Prime Minister Nuri al-Maliki called on the security forces to act with restraint as the country braced itself for fresh demonstrations, including a large protest planned in Baghdad’s Liberation Square for February 25.

In an apparent attempt to quell increasing unrest over services and economic woes, Maliki this week pledged to create more government jobs, improve the food rationing system and fix chronic electricity shortages within 12 to 15 months.

Maliki dispatched federal and military leaders to negotiate between Kut officials and protesters after security forces on February 16 opened fire on crowds who had set three government buildings on fire. Five people were killed and 60 wounded, according to a local hospital source.

About 1,000 protesters continued to hold a sit-in in front of two charred provincial council offices on February 18, calling for the resignation of the governor, Latif Hamad al-Turfa, and the release of nearly 50 protesters who were arrested during the demonstration.

The governor’s future appeared unclear. Asked whether the governor would be forced to resign, Haider Jasim Mohammed, a cultural adviser to the governor, told IWPR, “Yes, we are responding to the protesters’ demands.” He declined to elaborate further.

Kut intelligence chief Lieutenant-Colonel Mohammed Hewedi said the federal government had deployed an additional 200 security forces and that the shootings would be investigated. A vehicle ban and nighttime curfew were imposed in the city.

The protest was spurred by the local government’s decision to purchase 42 armoured cars at a cost of 74 million Iraqi dinars (62,000 US dollars) each, according to a local official who asked not to be identified. The decision enraged citizens, who complained of long-standing corruption and said that the funds should have been used to improve services.

In Sulaimaniyah, security forces opened fire on protesters throwing rocks and chanting anti-government slogans in front of the Kurdistan Democratic Party, KDP, office on February 17, killing a teenage boy and injuring nearly 60 other people. Three remained in critical condition on February 18, according to a Sulaimaniyah hospital source.

Kurdistan region president and KDP head Massoud Barzani called for the authorities to investigate the incident.

The main Kurdish opposition movement, Change, denied allegations that it had incited the demonstrations and reported that four of its offices in KDP-controlled Erbil and Duhok provinces were set on fire or looted on the evening of February 17.

The following morning, security forces including anti-terrorism brigades patrolled the city, shutting down the main road and using water cannons to break up a small gathering in the city centre. One protest organiser told IWPR he had gone into hiding, fearing arrest, and a shop owner said he saw riot police rounding up three young men. Rizgar Sabir, riot security chief, denied that any arrests had been made.

Troops were stationed outside the city, awaiting permission from local authorities to enter Sulaimaniyah, according to local press reports. The city is governed by the Patriotic Union of Kurdistan, PUK, a former rival of the KDP.

Fearing a potential attack on Change offices in Sulaimaniyah, hundreds of people gathered in front of the movement’s headquarters on February 18.

Serkot Sabir, a 25-year-old Sulaimaniyah resident, said he was concerned about escalating tensions and security.

“I am worried that the peshmerga (Kurdish forces) will get involved in the problem and will not stay impartial, [unlike] what happened in other countries,” he said, in an apparent reference to Egypt.

In oil-rich Basra on February 18, about 500 protesters shut down a local bridge, demanding better services, housing and reconstruction. Throughout the week, protesters had demonstrated over unemployment in front of Basra’s provincial council office.

"We have valid demands,” said Saad Abdul-Razzaq, a 50-year-old teacher. “Even if our protests are peaceful now, they won't be later.”

Small-scale demonstrations over services, unemployment and corruption were also held in several other provinces this week, including Anbar, Kirkuk and Nasiriyah, where protesters burned down a local government building.

“The demonstrations were peaceful at the beginning, the protesters did not raise any political demands, they asked for better services,” Kadhim al-Meqdadi, a media studies professor and analyst in Baghdad, said. “But when they saw no response they became disappointed and then the demonstrations turned violent.”

Meqdadi said that protests were gaining momentum nationwide because citizens felt that local and federal authorities were “intentionally neglecting their needs. They have been inspired by the revolutions in Tunisia and Egypt”.

The rally planned for Baghdad next week calling for political reform and action against corruption “will be a big one, and might be a starting point for civil disobedience if people’s demands aren’t met,” he warned. “It could be the start of something similar to what happened in [Egypt’s] Tahrir Square.”

Maliki in a speech on February 18 said that better services and economic development required stability, warning citizens who were considering protesting to “check every poster. You will discover there is a motive behind it that is not related to the Iraqi people's interests”.