Whether or not Saif al-Islam goes to the Hague, Libya’s legal system will struggle to deal with the many other cases likely to be brought.

Whether or not Saif al-Islam goes to the Hague, Libya’s legal system will struggle to deal with the many other cases likely to be brought. 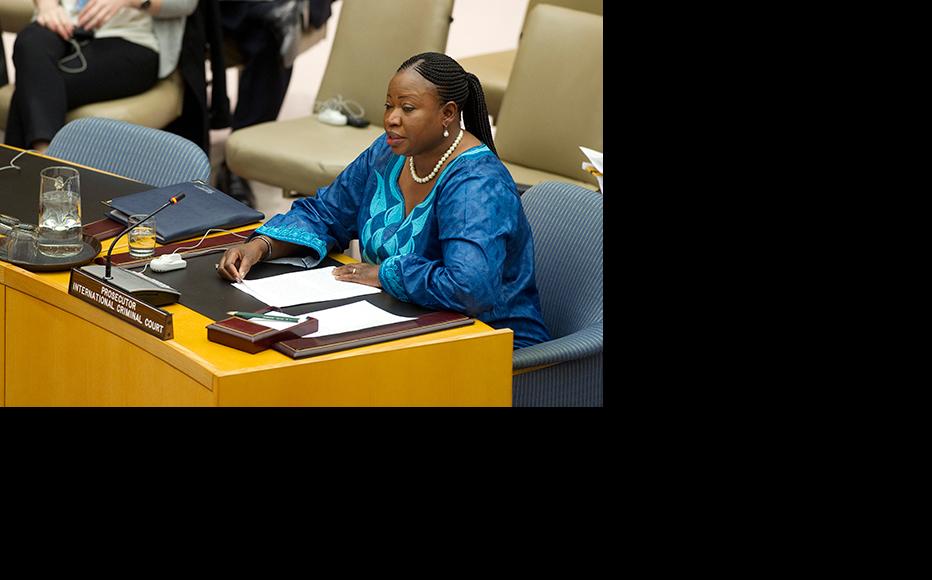 Fatou Bensouda, Prosecutor of the International Criminal Court, addresses the Security Council at its meeting on the situation in Libya, November 2012. (Photo: UN Photo/Evan Schneider)
The link has been copied

In the International Criminal Court’s long-running dispute with Libya on where two senior Gaddafi-era figures should go on trial, the next move will be a decision from the Hague court on whether the national judiciary is capable of trying them.

Saif al-Islam Gaddafi, son of the late Muammar Gaddafi, and former intelligence chief Abdullah al-Senussi are both in custody in Libya, which has so far refused to hand them over to the ICC.

A principle underpinning the ICC and known as “complementarity” requires national court systems to be given the chance to handle cases themselves as long as they are willing and able to do so.

The jury is out on whether that is the case in Libya, a country still in flux as central government attempts to establish nationwide control. The forthcoming ICC decision on Saif al-Islam and Senussi will thus also be a judgement on the Libyan judiciary’s current capacity.

Whatever happens in the case of these two high-level figures, there are plenty more who will come before Libyan courts. But is the system in any shape to conduct the complex investigations and prosecutions required to deal with crimes on such a massive scale?

Tripoli has been keen to show that it is able to prosecute Gaddafi’s officials for crimes that took place during the 2011 revolution, and a number of senior figures are under investigation.

Despite the ICC’s extradition request, Saif al-Islam is due to go on trial in May, although it is unclear what offences he will be accused of (see below).

One of the highest-profile trials, which began at the end of last year, involves former prime minister Baghdadi Ali Mahmoudi, charged with ordering government forces to commit mass rape during the uprising, and also with corruption. If convicted, he could face the death penalty or life imprisonment.

Other former officials awaiting trial include Ali Mohamed Marya, who was ambassador to Egypt, and former government spokesman Mohamed Ibrahim Mansour, although the allegations against them relate to alleged corruption rather than human rights abuses.

Last year, a Libyan judge suspended the trial of former intelligence official Buzeid Dorda, who was charged with killing civilians and provoking civil war. The judge said the prosecutor’s office had failed to follow correct procedures.

The case highlights one of the central challenges – the extent to which police, investigators and prosecutors are in a position to gather and use evidence of past abuses.

“The biggest problem in the country is that there is a central government but no central power,” said Stefan Schmitt, director of the international forensics programme at Physicians for Human Rights. He has spent time in Libya gathering forensic evidence relating to crimes, some of which has been submitted to the ICC.

“Just because the prime minister in Tripoli makes a decision does not mean it will be executed in Benghazi. If you have no centralised power, then you have a big problem with collecting evidence, storing it and processing it. In the short term, this is going to present some serious difficulties that I would urge the authorities to admit to and ask for some help on.”

Fiona Mangan, a policy officer with the United States Institute of Peace, says there is an urgent need to improve investigative procedures.

“Many of those now joining the police force are civilians and have not had proper police training,” Mangan said. “This has created frustration among both judges who can’t rule on the cases for lack of evidence, and prosecutors who don’t have enough evidence to proceed with cases.”

Judicial independence remains in question, given that judges will be required to try members of an administration that for years directed the way they operated.

The Libyan authorities insist that they take judicial independence seriously, and are capable of running proper trials. In their correspondence with the ICC on the Saif al-Islam and Senussi case, they have cited as evidence their decision to set up a Supreme Judicial Council, made up entirely of judges.

The council was set up at the end of last year to examine how the country’s legal system can be improved.

One of its more controversial proposals is a bill changing the way that members of the judiciary are selected. Although it may yet be amended before becoming law, the present draft recommends that judges with close links to the Gaddafi regime would not be eligible to serve unless they had shown support for the 2011 revolution.

A former legal advisor to the Gaddafi regime, speaking on condition of anonymity, suggested that this was a step in the wrong direction that could undermine the judiciary rather than make it more independent.

“Existing measures are sufficient to deal with judicial independence – we do not need an additional law,” he said. “The executive has no representation on the Supreme Judicial Council and no additional power over the judiciary. There are already existing measures in place to deal with those that collaborated with the former regime and abused their powers.”

Kevin Jon Heller, a senior lecturer at Melbourne Law School in Australia, says the real problems lie with the executive rather than the judiciary.

“There are some promising signs of a constitutional court in Libya, and many of the judges have demonstrated that they take the provisions of the criminal code seriously,” he said. “But a trial is only going to be as good as the prosecution is, and so far the government has demonstrated no will to provide [Saif al-Islam] with competent counsel to ensure that basic criminal procedures apply.”

Marieke Wierda is a senior human rights transitional justice officer at the United Nations Support Mission in Libya, which has made judicial reform a high priority for the transition. She says that Libya does have a functional justice system and that many of the problems that existed under the former regime have been resolved.

“Since the fall of the [Gaddafi] regime, a new Supreme Judicial Council was formed, which is taking steps to restructure the judiciary to bolster its independence,” she said. “A review of Libya’s criminal code is currently under way. The drafting of a new constitution brings an additional opportunity to enhance human rights protections, particularly for vulnerable groups.”

Wierda noted that the new justice minister, Salah Marghani, is “a well-respected human rights activist”, adding that “since his appointment, he has already initiated several legislative proposals and practical measures to strengthen human rights protections”.

However, she said, “Many challenges remain and it is urgent to ensure a better security environment for the courts to function, and to process thousands of cases of conflict-related detention.”

Whilst the judicial reform is a far broader issue than the two ICC cases, it is the fate of Saif al-Islam and Senussi that has seized most attention.

A decision from the ICC’s pre-trial chamber on whether Libya should be given the opportunity to try the two men is expected soon, although there is no deadline.

The ICC has raised concerns about whether Libya is ready to conduct its own trials, particularly in terms of legal representation for suspects, but the court has not indicated which way it will rule.

Libya remains adamant that it is capable of carrying out trials.

The document states that the judiciary and police force have received external training and support, that the election in 2012 was widely regarded as democratic, and that Justice Minister Marghani is a champion of human rights.

To counter those arguments, critics point out that Saif al-Islam has remained in jail in the northwestern city of Zintan for nearly 18 months without trial. Nor is it clear what the authorities are accusing him of.

The ICC alleges that he was indirectly responsible for murder and persecution, which count as crimes against humanity as laid out under the court’s founding Rome Statute.

Lawyers acting for the Libyan authorities maintain that the national proceedings against Saif al-Islam cover the same matters as the ICC case.

“[Libya] has done its utmost, in extremely difficult circumstances, to produce evidence of its ongoing national proceedings in respect of Saif al-Islam Gaddafi which cover the same conduct that forms the subject of the ICC proceedings against him,” they said in the March submission to the ICC.

However, other legal sources in the country claim that the charges brought against Saif al-Islam relate to allegations that he traded sensitive information with ICC lawyers when they visited him last year, and not to any human rights abuses.

The Libyan authorities have repeatedly delayed the start of his trial, which is now expected to begin in May. Part of the problem is that he remains in detention in Zintan, an area where the government in Tripoli has only limited influence.

Heller says that the fact that the suspect still remains effectively beyond the reach of central government is the clearest indication that Libya is not in any shape to try figures like him and Senussi.

“In its submission, Libya admits that it is still unable to get hold of Saif [al-Islam], and that failure is due to the unavailability of its national judicial system in Zintan, which is under the control of the militia holding Saif [al-Islam],” Heller said.

He pointed out that Libya had drawn out its admissibility challenge at the ICC for nearly nine months, and urged the pre-trial chamber to rule it “once and for all”.

“I have no doubt that over the long-run Libya can build an effective criminal justice system, but the question is – in the immediate aftermath of the revolution, as the authorities are trying to reconstruct a legal system that was largely co-opted and destroyed by the Gaddafis – can they hold a fair trial of two of the most important figures representing the previous regime?” Heller asked.

In Libya, though, there is a great appetite for any trials of Gaddafi-era figure to take place inside the country.

“From the Libyans’ perspective, they feel a very strong sovereign right to be able to hold their own trials. They have fought, died and bled in order to earn this right – and we [the international community] have a moral obligation to help them,” said Mike Newton, a professor of the practice of law at Vanderbilt Law School in the United States,

Newton argues that this desire to see justice done makes it imperative for external assistance for focus on supporting judicial reform and institution-building.

“What we need is lean and focused assistance to select ministries,” Newton said. “Libya needs things like forensic experts, small teams of five or ten prosecutors and judges. [There should be] an exchange programme that can work alongside or inside the ministries. At the moment, we are not doing this at all.”

Blake Evans-Pritchard is an IWPR trainer and contributor in The Hague.