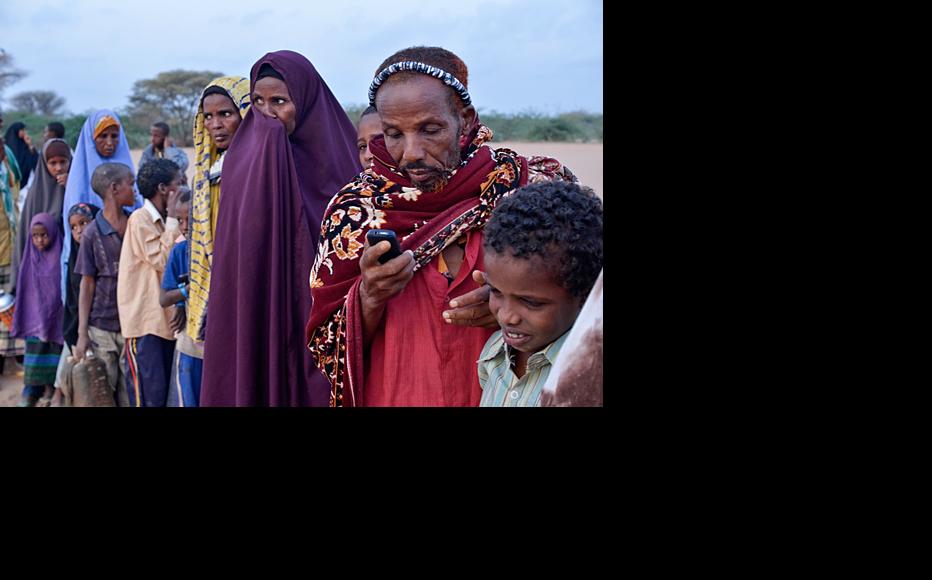 Sahal Gure Mohamed, 62, texts on his mobile phone while waiting in line at dawn to register at Ifo refugee camp in Dadaab, Kenya. (Photo: InternewsEurope/Flickr)
The link has been copied

Local and international rights groups have criticised demands by a group of Kenyan legislators to close down a massive refugee camp on the country’s northern border with Somalia.

The proposal to shut the camp follows last month’s attack on a Nairobi shopping centre by the militant Somali group al-Shabab in which 67 people were killed and more than 300 injured.

In the wake of the attack, Kenya’s parliamentary committee on security called for the immediate closure of the Dadaab settlement, run by the United Nations refugee agency UNHCR approximately 100 kilometres south of the border with Somalia.

Dadaab is home to nearly 500,000 refugees, most of whom fled conflict in southern Somalia over the years and live in several different camps within the settlement,

The Kenyan parliament’s committee for national security has claimed that the site has become a training ground for Islamic extremists masquerading as refugees. In a session held ten days after the Westgate attack, committee chairman Asman Kamama said the “camp has become a nursery for terrorists” and that Kenya’s security must take priority.

“The UN must now understand the security of Kenyans comes first,” he said. “Even if it is about human rights, it should not be at our expense.”

The committee, which has yet to submit a formal report on the issue to the government, wants UN backing to ensure that the camp is closed down with immediate effect.

“These camps are currently home to over 400,000 refugees, including many forced to flee to Kenya because of al-Shabab abuses,” Gerry Simpson, a senior researcher on refugees for the organisation, told IWPR.

While agreeing that protecting Kenyans from security threats is an priority, Human Rights Watch argues that it is not the time to be talking about closing the camps.

“Forcing them back to a country still wracked by widespread violence and insecurity would not only breach Kenya’s obligations under international law but could inflame further instability in Somalia,” Simpson said.

“Returning refugees to Somalia, where all parties to the conflict, including al-Shabab, continue to carry out attacks against civilians, would only make matters worse and would be in violation of international law,” Amnesty’s deputy Africa director Sarah Jackson said. “Instead, authorities in Kenya must protect those living in a vulnerable situation in refugee camps.”

“Blaming Kenya’s security concerns and the recent heinous attack in Nairobi on hundreds of thousands of refugees discriminates against some of the most vulnerable people in the country,” Jackson continued.

She told IWPR that Somali refugees living in Dadaab should not be associated with al-Shabab “just because of their nationality”.

Closing the camp is “just not possible”, the spokesperson said. “We have a lot of women and children in the camp, people who have fled insecurity. The time is just not right to send back large numbers of people, and any return has to be voluntary.”

Al-Shabab said the attack was a response to Kenyan military operations in southern Somalia. The Kenyan army has been in Somalia since October 2011 as part of a joint effort by African Union states to flush out the Islamic militant group.

Since the attack, Kenya’s president Uhuru Kenyatta has repeatedly insisted that his country would not withdraw its troops from Somalia.

“If their desire is for us to remove our forces, let them do what they should have done 20 years ago, otherwise we will remain there until they bring order to their nation,” the president said during a prayer vigil held in honour of the Westgate victims.

Laban Osoro, deputy executive director of the Nairobi based rights group, Kituo Cha Sheria, said there was no evidence either that Somalia was secure or that the government was in control of its territory and thus able to protect returning refugees.

“Under international law, when conditions of persecution change and a free, democratic government that respects human rights, good governance and the rule of law is in place, refugees should voluntarily return,” Ororo wrote in a recent op-ed for Kenya’s Star newspaper. “There cannot be forced returns.”

J.J. Wangui is an IWPR reporter in Nairobi.