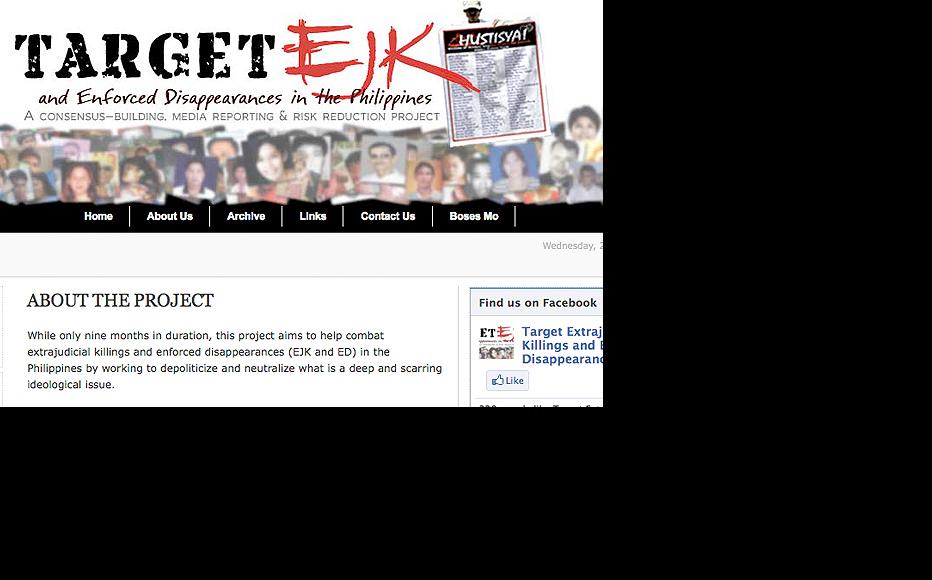 http://www.targetejk.net/
The link has been copied

(GMA News.TV)  It’s a bit like “mini peace talks" — the series of meetings held in the past three months between human rights advocates and law enforcers who are often accused of abuses — but it’s gone largely unnoticed by the public.

Retired Maj. Gen. Jovito Palparan, whom activists have dubbed “the butcher" for his alleged involvement in several killings during his stint in the Philippine Army, attended one of the meetings.

Another one was held with Satur Ocampo, former representative of the partylist group Bayan Muna, whose members have been victims of the killings.

“We were a bit anxious that the two sides would be at each other’s throats, but the meeting turned out to be quite civil," said Rorie Fajardo, Program Coordinator of the Institute for War and Peace Reporting (IWPR), an international media NGO.

The meetings are part of the “Target Extrajudicial Killings and Enforced Disappearances: A Consensus-Building, Media Reporting, and Risk Reduction Project" (Target EJK), a project launched by IWPR last October in Quezon City.

In the days leading up to the first anniversary of the Maguindanao massacre on Nov. 23, in which at least 57 people getting killed in the country’s worst election-related violent incident, these human rights issues are once again gaining public attention.

“But huge disagreements on the issue among human rights groups, the military and other groups hamper the forging of lasting solutions," Fajardo said.

NEED FOR A COMMON DEFINITION

At least 70 journalists have been murdered since 1992, the international media watchdog Committee to Protect Journalist has reported, while Karapatan has listed over 1,000 killings that occurred during the administration of former President Gloria Macapagal-Arroyo alone.

The nine-month project aims to bring together opposing groups in order to build consensus the definitions of extrajudicial killings and enforced disappearances, the scope of victims included, and the monitoring of incidents.

“Despite a very high and increasing number of killings and involuntary disappearances, these issues remain deeply divisive and contested, with huge disagreements between groups over actual numbers or who should be deemed victim," explained Alan Davis, Target EJK director and IWPR Head of Asia Programming.

“The result is that everybody loses — most especially the victims and the families they leave behind," Davis added.

Even among human rights advocates, there are disagreements regarding definitions, Fajardo noted.

Some militant groups like Karapatan define human rights violations as abuses that can only be committed by the government’s law enforcers, while those committed by other entities are considered “crimes."

Meanwhile, other groups such as Sulong CARHRIHL (Comprehensive Agreement on Respect for Human Rights and International Humanitarian Law) recognize that abuses can be committed by all parties involved in a conflict.

Even the numbers of murdered and kidnapped victims depend on who is doing the counting, she noted.

“Data collection is typically determined by the political and ideological views of those doing the monitoring and is consequently rejected by others," Davis observed.

For instance, Task Force Usig — the special unit of the Philippine National Police (PNP) created by Mrs. Arroyo in May 2006 to investigate the wave of violence at the time — uses a different term and does not keep a list of the killings due to the lack of a law defining extrajudicial killings.

“Some state institutions, particularly the judiciary, were against the use of the term extrajudicial killings here in the Philippines because there (are) currently no judicial killings— therefore the preference for ‘extra legal killings’ here among some," PNP-Human Rights Affairs Office staff Ernie Cifra said.

Seeking to bridge the divide and clear away the confusion, the IWPR launched the Target EJK project to “depoliticize" the two issues and bring together the many groups that are most affected by the killings and disappearances.

“There is a need to put the issue and the question beyond the political debate once and for all," Davis said, “so that we can move on to building a proper database and monitoring system, which will also make it easier to monitor the status of the cases and therefore ensure that justice is eventually served."

The Target EJK project builds on the premise that developing a “politically neutral approach is the first crucial step toward forging a common approach to combating the growing climate of impunity in the country," Davis told GMANews.TV.

The warming of relations between the traditionally opposing groups during the project launch raised hopes that building consensus was possible even within the project’s short lifespan, said Davis. The Target EJK project runs until March next year.

The launch became a venue for dialog that brought together about 60 people including long-time adversaries such as Karapatan chairperson Marie Hilao-Enriquez, whose group blames the military for all extrajudicial killings and enforced disappearances in the country, and AFP Spokesman Gen Mabanta.

It was the first time that Karapatan attended a dialog with the Philippine military, which has accused the group of being part of the communist insurgency. Karapatan has said the allegation has made their members vulnerable as targets of extrajudicial killings.

During a panel discussion, Mabanta admitted that the AFP may have not paid attention to human rights in the past but it is now committed to reform in its ranks.

“We are bent on stamping out human rights abuses, and we need you," Mabanta said, adding that the AFP wants to remove the stigma that soldiers are human rights violators.

As part of the project, IWPR held meetings and listened to opposing views on the twin issues. Among the groups and human rights advocates they have met with are the AFP Civil Relations Service, Task Force Usig, Cordillera People's Alliance, Philippine Alliance of Human Rights Advocates, Sulong CARHRIHL, Commission on Human Rights, and Manila Auxiliary Bishop Broderick Pabillo.

Target EJK staff are also looking into specific cases of killings and enforced disappearances, and examining the capabilities and deficiencies of the country’s justice and forensic systems.

The results of the meetings, investigations, studies, and news about the project are posted on the Target EJK website.

“The project will run only for such a short period, but the signs are good. We are hopeful that at the end of the project period, we would have built, at least, a foundation for a common definition to be drafted," Fajardo said. – YA, GMANews.TV