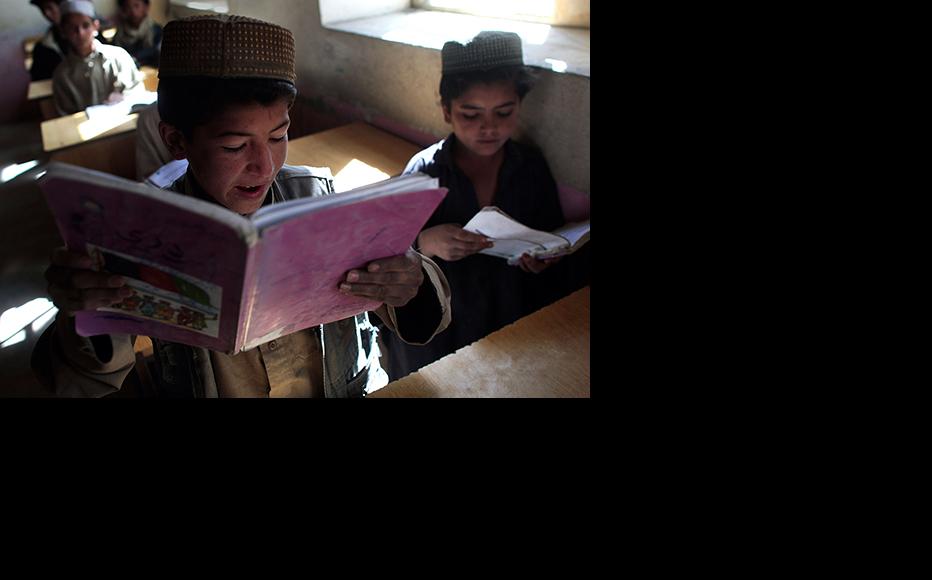 A student reads aloud at a school in Paktika province. (Photo: Chris Hondros/Getty Images)
The link has been copied

An initiative to build new schools in the southeastern province of Paktika has been boosted by a large private donation from the Afghan president himself.

Ashraf Ghani contributed 300,000 US dollars to a scheme aimed at improving access to education in the province.

Local officials had initially planned to build six fully-equipped, concrete block schools in several remote districts of Paktika. But following a review, the strategy was adapted so that 24 mud-brick schools - which are much cheaper to construct – could be built within the same budget.

Paktika governor Mohammad Elias said, “We knew that by using mud brick instead of concrete we could build more schools with the same amount of money and improve students’ access to education even more.

“Our proposal was welcomed by the president and the idea was considered so effective that he then advised the ministry of education to implement the strategy across the country.”

Wahdat added, “By implementing the original plan we could have provided schools for an additional 1,000 students. But by building cheaper facilities, we hope as many as 10,000 students will now have classrooms to go to and many of these students will be girls.”

The large, southeastern province of Paktika has a population of just over 430,000 people. Official figures show there are currently 389 schools in the region, although around 250 of these are open-air classrooms with no physical infrastructure. Out of 3,500 teachers employed to teach 15,000 students in the province, just 56 are women.

Wahdat told IWPR that the president’s initiative was born following a meeting with provincial council members in January this year to discuss efforts to improve educational facilities and boost the region’s economy.

After the conference, Ghani took the highly unusual step of announcing he would personally donate 300,000 dollars to help build more schools. It is not known if he has ever personally financed a project of this type before.

He said five girls’ schools had already been built in the province and that new classrooms in numerous other districts – including Yusufkhel, Jani Khel, Surobi, Wor Mamay, Wazakhwa and Khayr kot – had also been completed. A total of seven schools for boys in Sar Hawza, Yahyakhel, and Charbaran districts were now finished, he added.

Atalwal said that their project could provide a blueprint for school building across Afghanistan.

“Since our meeting with the president, the minister for education has announced plans to build 8,000 mud constructed schools across the country over the next five years,” he continued. “The ministry has also sent out a letter to officially confirm the scheme in writing.”

Habibullah, headteacher at one of the newly-built schools in Kotwalo village in Paktika’s provincial capital, Sharana, said until recently students had been taught in tents or, during the summer months, under the shade of trees.

He said, “Our new primary school has 12 classrooms which all have the necessary teaching equipment. It’s a great environment for learning.”

Abdul Khaliq, the headmaster of Fatima-ul-Zahra girls’ school in Yusufkhel district, added that although his new building was very basic, an elaborate structure could always be built at a future date.

“By constructing this building 300 girls are now receiving an education,” he told IWPR. “The people of Paktika will forever be grateful for the president’s donation.”

“The president has helped Paktika province enormously and we urge him to continue to do so,” he said. “There are still a large number of schools here that don’t have buildings.”

Pupils at the new schools also said they were delighted with their improved conditions.

Nasima, a student at the Fatima-ul-Zahra secondary school, described how the intense heat and extreme cold of Afghanistan’s changing seasons had made studying in makeshift tents very difficult.

“For the last few years we’ve had to study in tents which can be really tough,” she said. “Often in the summer or winter the school is shut because the temperatures become too extreme.

“It’s long been our dream to have proper classrooms and now we have the president to thank for it.”

Nasrullah, who studies at Tawdachina school, added, “Now it doesn’t matter is it’s raining or sunny - it doesn’t affect our studies.”

Tribal elder Mullah Abdul Manan Herar also thanked the president. He said, “In the past this frontier province has always been ignored by previous governments.

“The level of education here is much lower compared with other provinces and we hope the government remains committed to helping us now.”