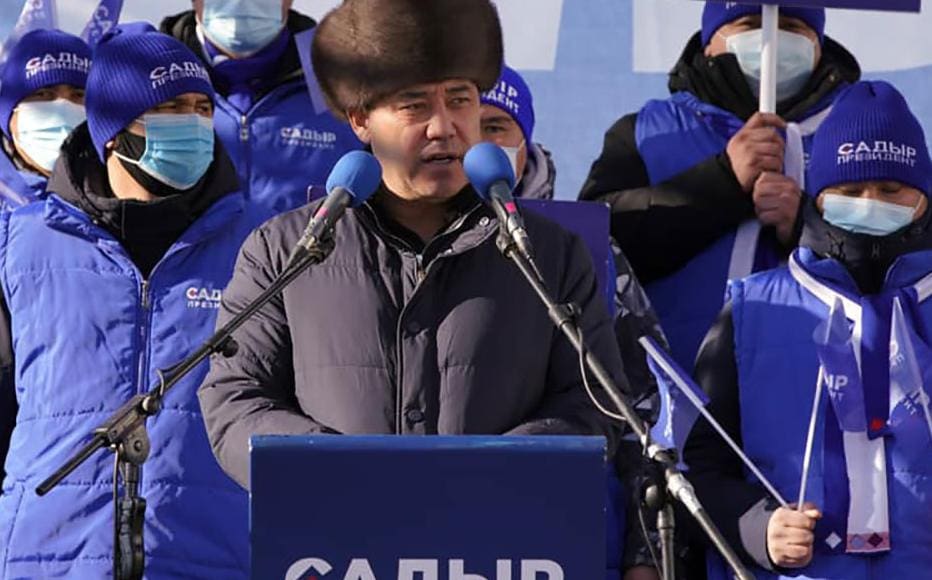 Analysts warn that Sadyr Zhaparov’s apparent resounding victory in the January 10 presidential elections may herald a return towards a more authoritarian style of rule in Kyrgyzstan.

According to preliminary data from the Central Election Commission (CEC), Zhaparov – who had been serving a lengthy prison term before his dramatic release following the disputed October 2020 elections - won 82 per cent of the vote.

Sadyr has advocated returning to the presidential system of government of a decade ago as a means to fight corruption and develop the economy. He was among the initiators of a constitutional referendum, also held on January 10, which saw 84 per cent voting for the restoration of this system.

Although the election and referendum were deemed to be fair and free, local and international observers did note instances of intimidation at regional polling stations as well as restrictions on the work of some independent monitors.

Voter turnout at only 39 per cent was also particularly low. Experts attributed this to the elimination of a form that allowed internal migrants to vote at a place other than their registered address, as well as the poor distribution of administrative resources.

Zhaparov had been in prison since 2017 serving an 11-and a half year sentence on charges of organising mass unrest and hostage taking in 2013 when, on October 6, protesters dissatisfied with the election results seized parliament and governmental buildings.

Freed from prison, he quickly formed a new government, and assumed the role of acting president a week later when the incumbent Sooronbai Zheenbekov suddenly resigned from office.

A new draft constitution, which envisages the elimination of the post of prime minister, the transfer of all executive powers to the president as well as restrictions placed on parliament’s supervisory function, is now also expected to be approved by a large margin. Zhaparov said that this vote, along with fresh parliamentary elections, will be held before summer.

He argued that his proposed reorganisation would allow the president to initiate special reforms and be personally responsible for their outcome.

“There is no anger or hatred in my heart,” he told at a January 10 press conference held after the announcement of preliminary results. “Neither to my rivals, nor to those who tried to discredit me.

“Now there is no need to spread false information and slander. Nothing good will come of it. Therefore, I urge opponents to unite and let's all be patriots.”

However, critics fear this heralds the restoration of an authoritarian regime similar to those of presidents Askar Akayev and Kurmanbek Bakiev. Both fled the country after mass riots in 2005 and 2010 respectively.

The controversial circumstances under which Zhaparov came to power in October 2020 meant that a range of Kyrgyzstan’s key foreign partners, including the US, Russia and the EU, were hesitant to recognise his legitimacy.

The elections has partially resolved this issue, with the presidents of Russia, neighbouring Kazakstan and Uzbekistan among the first to congratulate him on his victory.

The US and the EU also issued statements welcoming the election and the referendum results, although their wording appeared to suggest they also shared concerns about his future intentions.

“The EU encourages the future president to work with all parts of society and further strengthen the Kyrgyz Republic’s universal obligations towards human rights and fundamental freedoms, as well as to respect its international commitments,” read the EU statement.

As for the new constitution, the statement added that it “must ensure that the presidential system continues to fully respect democratic principles, in line with its international commitments. Ongoing discussions should be inclusive and transparent”.

Analysts note that Zhaparov fulfils qualities typical of a political populist, not least because his discourse focused on concrete issues, rather than abstract concepts like democracy.

“The people take Sadyr Zhaparov as a kind of a mythological hero who represents neither the officials, nor the former elite,” analyst Elmira Nogoibaeva said. “Many people see him as one of their own, a victim of political repression and a martyr.

“Regional identity is also significant here. Although he was born in Issyk-Kul, he has many followers in the south of the country, plus he’s religious, moderate… and people trust him.”

However, such faith was misguided, she continued.

“I’m afraid his next step will be taking control of powers; first of all, of security and economic agencies. This is the logic of fear [to first intimidate government employees and politicians].It is effective, but not in Kyrgyzstan,” Nogoibaeva said.

Kyrgyzstan is a poor country with the annual budget of only 2.5 billion dollars. Out of six million people, one third are officially below the poverty line, and nearly 1.5 million citizens have left as labour migrants.

During his election campaign, Zhaparov promised to embark on a course of steady economic development.

But political analyst Chinara Esengul said that this would be unlikely to translate into stability.

“A lot of criticism will be addressed against him because of the way he came to power - and there are many questions about the forces that helped him do this,” Esengul said. “Reforms take a lot of time and a strong team, which he does not have.”

An IWPR-trained journalist in Bishkek contributed to this report.

Giving Voice, Driving Change - from the Borderland to the Steppes
Kyrgyzstan
Elections, Political reform
Connect with us