Aside from the need for cold storage, there seems to be no limit to the cash crop’s potential.

Aside from the need for cold storage, there seems to be no limit to the cash crop’s potential. 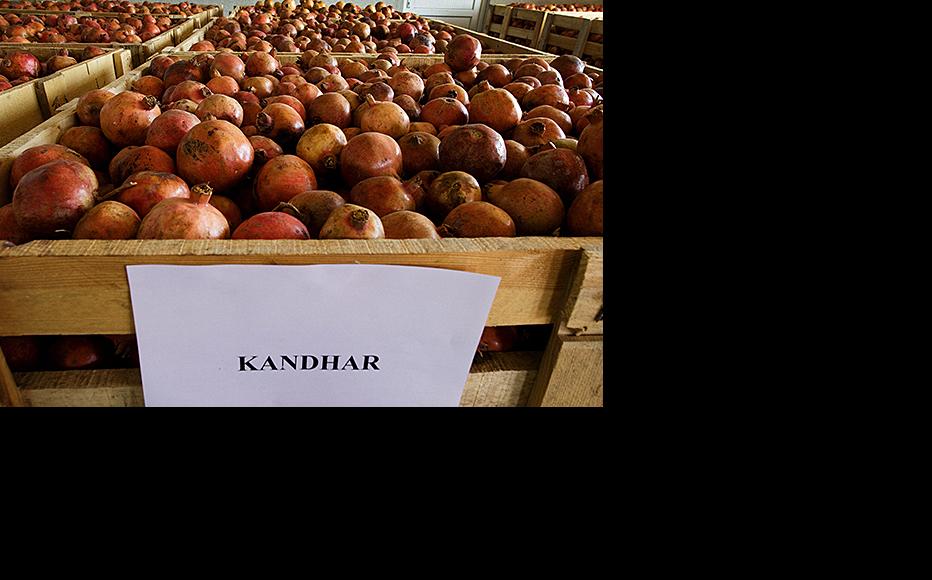 Lying in the shade of a pomegranate tree, Sardar Wali, 50, looked forward to an abundant crop.

“As long as my orchard isn’t hit by disease and the security situation doesn’t deteriorate, I will have such a high yield this year that all my problems will be solved,” he said.

Pointing at the small green fruit on the trees, he said, “Do you see these pomegranates? Once they’re ripe, their seeds will be visible even through the skin. They fetch a very good price. Most people give these pomegranates to friends and relatives as a gift.”

The 2,000 pomegranate trees in Wali’s orchard in Afghanistan’s southern Kandahar province produce up to 112 tons of fruit a year, and these days there is no shortage of buyers.

“As soon as our pomegranate trees blossom, the traders come and talk to us. They buy up the whole orchard,” he told IWPR. “In the past, we used to have to look for buyers, and we failed to sell our pomegranates most of the time.”

Pomegranates have always been an important crop in Afghanistan, and production has revived over the last decade. In Kandahar province, once the epicentre of Taleban power and still a trouble-spot, farmers say pomegranates offer a viable alternate to opium poppies.

“People are now more interested in planting pomegranate orchards than poppy, because the revenue is good and it isn’t illegal, either. I want pomegranates on the rest of my land, too,” Wali said.

Provincial agriculture official Sher Mohammad told IWPR that the area covered by pomegranate orchards was on the increase, and that 300 new plantations had appeared in one district, Arghandab, alone.

While Wali complained that he had received no encouragement from local government, Sher Mohammad insisted the growth in the sector was all down to official support.

“We organise workshops for orchard owners on growing and protecting different fruits,” he said. “Public awareness sessions have been held in every district and a farmers’ association has been set up which now provides cut-price pomegranate saplings at a lower price in some districts.”

Zmarai, spokesman for Kandahar city mayor Mohammad Omar, said the municipality was safeguarding farms in the area by banning construction on arable land.

“We are protecting agricultural land. No one can build anything there. We pay a lot of attention to agriculture in Kandahar because it’s our backbone,” he said.

Zabihullah Ziarmal, who deals with plant health at the provincial agriculture department, said production was rising because of Kandahar’s naturally good soil and abundant water supply, and now the strong demand from local and foreign buyers.

Ziarmal added that because pomegranates were very sensitive fruit and easily affected by chemicals, his department was advising farmers on alternative methods of caring for saplings and treating disease and pests.

Abdul Baqi, deputy chairman of the Kandahar chamber of commerce, said that up to 7,000 tons of the pomegranates worth 1.5 million US dollars, were exported last year, on top of the grapes, melons, almonds, raisins and figs grown in the province and sold abroad.

Most pomegranates went to India, Pakistan and the United Arab Emirates by cost-effective land routes, he said, although for the last five years some had been flown via Dubai to The Netherlands and Germany.

“We don’t have the normal facilities to store and transport pomegranates. We need to have cold storage here to be able to keep pomegranates between seasons,” Baqi said, adding that if such facilities existed, revenues would be much higher.

Nonetheless, farmers and traders seem happy with their earnings.

“My cousin had pomegranates planted on 40,000 square metres of land,” Kandahar resident Pahlawan said. “He expanded the orchard over a further 10,000 sq m last year. The fact that he created a new orchard shows that pomegranates make a good profit.”

Shah Agha, an elderly gardener with a lot of experience of tending saplings, said his skills were now in high demand.

“When the season for saplings starts in October and November, I have no spare time. It isn’t easy to prune the saplings; it takes skill and a steady hand. I make no mistakes with my saplings, so my services are sought after.”

Sher Agha said he believed pomegranate cultivation was reducing the scale of poppy farming in Kandahar.

Local traders are also cashing in.

Azim Munawar, a shopkeeper in the city’s fruit market, said that he was delighted by the pomegranate harvest.

“I sell up to 1,200 boxes of pomegranates to retailers every day during the season. I make so much profit that I can’t spend it all before the next year. It’s enough for me,” he said.

Nurullah, a large-scale trader, said the market was booming, although cold storage facilities were going to be needed as production expanded.

“I bought 100,000 dollars-worth of pomegranates last year. I exported some and sold the rest to other provinces within the country,” he said. “I made a delicious profit.”

“I love walking through pomegranate orchards, and every owner brings me the best fruit from his orchard to eat,” he said. “The fruit is widely consumed within this country and there’s no risk of making a loss. I turn a big profit every pomegranate season.”