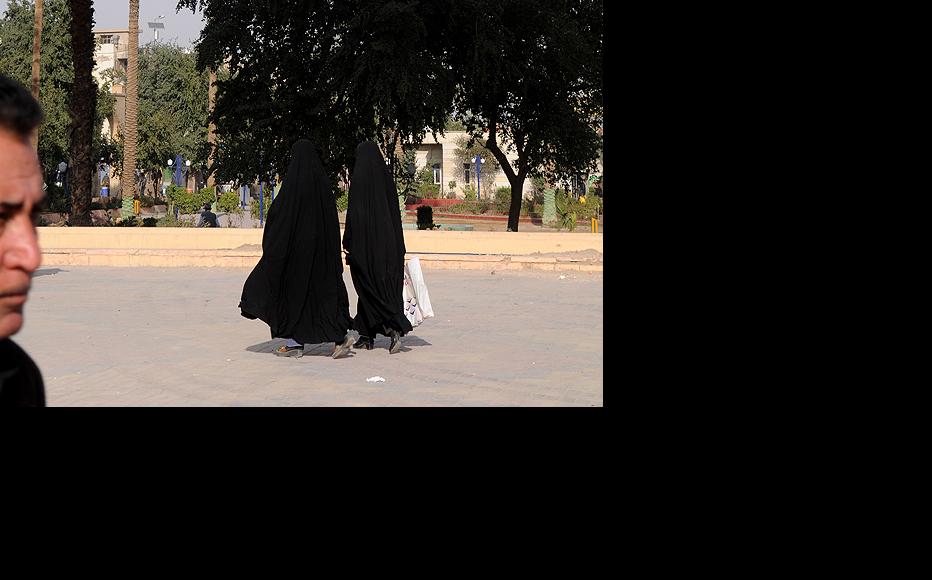 The conflict in Iraq created tens of thousands of widows, some of whom accept polygamous marriages as an answer to their problems. (Photo: Metrography)
The link has been copied

Widowed by an American air-strike, Walaa Ahmed spent four years sharing a house with a hostile sister-in-law before she decided to remarry.

Though the domestic tension made her desperate to move out, she delayed accepting a proposal from her late husband's friend, fearing he would be unable to support her and her young daughter.

A gift of more than 4,000 US dollars helped change her mind. The money came from a charity that aids widows in Iraq’s Anbar province. It enabled Walaa to move into a small flat, and it gave her husband, Qazwan Fadil, the chance to start working as a taxi driver.

“I was surprised to hear of the grant. We wouldn't have been able to marry without it,” said Walaa, from her honeymoon in the lakeside resort town of Habbaniyah, near the city of Fallujah.

Qazwan agreed that the money had helped overcome significant hurdles to their union - including the objections of the woman to whom he was already married. She had not wanted him to take a second wife, but now allows him to divide his time between the two homes.

“Polygamy rejuvenates a man, especially if his relations with his first wife have cooled down,” said Qazwan. “Moreover, it prevents adultery and protects widows, divorcees and spinsters from a life of immorality. Our experience has been a success. It should be taken as a model.”

Polygamy has been practised for centuries in many Muslim societies. Islam permits men to take up to four wives on condition that they treat them equitably. In Iraq, such marriages are most common among relatively affluent or influential families in rural regions. Though widespread, polygamy is not the norm and the overwhelming majority of Iraqi couples are monogamous.

Qazwan and Walaa are among scores of beneficiaries of a controversial campaign to encourage polygamy in Anbar, a largely Sunni Arab province that was the scene of heavy fighting between insurgents and forces backed by the US military.

The drive has been managed by local charities and has the support of prominent clerics and politicians. By offering money to men willing to take more than one wife, they are promoting polygamy as a traditional solution to a demographic problem: the dramatic rise in the population of unmarried or widowed women in a war-wracked society.

Opponents of the campaign - including rivals of the leaders who are backing it - say it is a political stunt that will have little genuine impact. Critics also say the money set aside to encourage polygamy could be better spent on schemes that equip vulnerable women to fend for themselves economically, rather than placing them in the care of husbands.

Roughly 1.7 million people live in Anbar province, of whom more than 130,000 are estimated to be widowed or unmarried women with no male relative to support them. Across Iraq, the number of such women is estimated to be around one million.

While Anbar accounts for less than six per cent of the population of Iraq, its widows and unmarried women make up more than one-tenth of the country's total.

Many link the disproportionate number of widows in the province to the recent conflict, which was particularly bloody in Anbar and mostly claimed the lives of its young men. As well as destroying many people's marriages, the violence has made it harder for others to embark upon them.

Thousands of young men have left the province to find work outside an economy still crippled by conflict. Many of those left behind do not have stable jobs and are deterred by the high costs associated with weddings and starting a family.

Rabiya al-Naeel, a member of Anbar's provincial council and a supporter of the campaign to encourage polygamy, believes the growing number of widowed and unmarried women poses a threat to Anbar's traditional and deeply conservative society.

“Marriage helps women remain chaste and secure a livelihood,” she said. “Young generations must take more than one wife to prevent the fabric of society from falling apart.... The call for polygamy is not motivated by Islam but by social and humanitarian concerns.”

Naeel belongs to a faction associated with the Sahwa or Awakening, a tribal militia credited with turning the tables against al-Qaeda in the province. Political backing for the polygamy campaign comes mainly from certain Sahwa leaders, and from local members of the Iraqi Islamic Party, IIP, a Sunni Islamist group led by Iraqi vice-president Tariq al-Hashemi.

The IIP’s leader in Anbar, Khalid al-Alwani, told IWPR that the party had set aside funds for polygamous marriages as part of a broader drive to address the humanitarian needs of widowed and unmarried women.

“We encouraged men to marry widows and divorcees when we realised the painful reality of their situation,” he said.

According to Alwani, the party was prepared to pay between 750 dollars to any man who chose to take a second wife, and up to 2,000 dollars to those who wed women who had been married before. According to Naeel, larger sums were available in some cases to men who were marrying their third or fourth wife.

Officials said hundreds of people had applied for the funds since the campaign was started in September 2010. The funds were managed by Hashemi’s office, Sahwa leaders and by a network of local non-governmental organisations.

In the first half of 2010, some 100,000 dollars were spent on sponsoring polygamous marriages, said Alwani. He did not give figures for exactly how many marriages had been held using this money.

However, an official from Al-Khair, a local humanitarian aid agency, said it had helped fund 124 polygamous unions since the start of the campaign.

The official, who asked not to be named, said the money had been raised through a variety of channels, including mosques, clerics, private donors, and the offices of IIP and Sahwa leaders.

Critics of the polygamy drive have argued that it will only have a limited impact on the plight of Anbar's most vulnerable women.

“Even if this campaign is a success, the number of couples it helps will not greatly exceed double figures. However, the number of women who need assistance is in the region of tens of thousands,” said Hikmat Zaidan, a deputy to the governor of Anbar province. “[The problem] needs a huge budget.”

Zaidan added that Anbar’s widowed and unmarried women were more likely to benefit from an increase in their welfare payments. The state should also fund workshops and micro-finance projects that would help the women become self-sufficient, he said.

Zaidan said politicians who had backed the cause of polygamy were largely seeking to “repair their image” on the Anbar street.

Sheikh Raad al-Sabah, a prominent Sahwa leader in Anbar, also argued that the polygamy drive was in effect part of a political campaign by the IIP to revive its following in the province.

“The IIP is spending money to regain power.... They are trying to win the hearts of the people, especially the poor, through these projects,” he said.

The charge was dismissed by Alwani, who insisted the campaign's objectives were entirely charitable.

“There is not a single benefit to the IIP party from the polygamy initiative, except that it helps people,” he said. “We have many other programmes to support people who want to get married and to help victims of war and terrorism.”

Supporters of the polygamy campaign also reject the allegation that the money would be better spent elsewhere. They say the drive is a form of direct action in support of vulnerable women, filling a void left by the government's failure to heed their plight.

“Hundreds of women spend the night crying into their pillows,” said Ibtisam al-Ani, a member of the Anbar provincial council and a women’s rights activist. "We realised that the government was busy with elections, politics and bombings.... We couldn't wait for the authorities to act, so we initiated this campaign.”

On the streets of Anbar, reaction to the polygamy initiative was mixed.

Basiha Hamad, a Fallujah widow in her early thirties and the mother of three children, said she would like to marry again - but not at the expense of her dignity.

“I would only marry a man who accepts me and my children for what we are and does so with the consent of his wife. I would not want someone who brings me to his house to be his servant,” she said.

“The money raised for promoting polygamy should be used to build workshops so we can live in honour and dignity, instead of being intruders in other people's households.”

Rasheed Mohammed, a teacher from Ramadi in his forties, said he would not mind taking a second wife, but would be unlikely to be able to afford it.

“Whoever enters such a marriage would have to set up a separate household,” he said, “as he would not have the support of his first wife.”

Uthman al-Mukhtar is an IWPR-trained reporter based in Fallujah. This story was edited from London by Iraqi Crisis Report editor Neil Arun.

Iraq
Women's rights
Connect with us