Officials insist there is no direct link between Syrian/Iraqi militants and their supporters in Mindanao.

Officials insist there is no direct link between Syrian/Iraqi militants and their supporters in Mindanao. 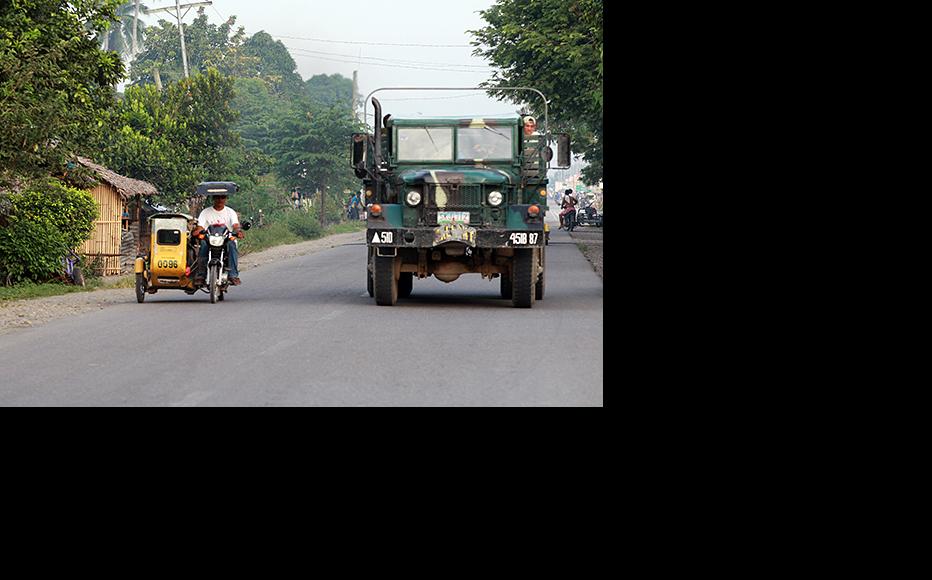 A military truck on patrol in Mindanao province after clashes in July 2014. (Photo: Jeoffrey Maitem/Getty Images)
The link has been copied

The authorities in the Philippines are investigating reports that Islamic State in Syria and Iraq (ISIS) flags have been raised and pledges of loyalty made to the group in the southern city of Marawi, long regarded as an Islamic fundamentalist stronghold.

Around 100 Filipino Muslims gathered in public to pledge allegiance to ISIS after Friday prayers and urge their community to back ISIS, which has taken over large parts of Syria and Iraq.

Photos uploaded to Facebook showed the blurred faces of people — some of them children — inside a mosque, holding black flags similar to the ISIS banner.

Similar flags have been found following military raids on extremist Muslim groups elsewhere in the southern Philippines over the past few years.

Local officials confirmed that the meeting in Marawi involved ISIS supporters, and expressed concern about the increasing number of extremists here. This Muslim-majority region has long been the scene of several armed insurgencies involving both Islamic separatists and communist rebels.

“We can think of initial peaceful and persuasive efforts to deal with the ideologues,” provincial governor Mamintal “Bombit” Alonto-Adiong Jr. told a local newspaper. “We certainly cannot allow religious extremism to escalate into an armed movement.”

In the nearby island province of Basilan, the authorities reported that a group presenting itself as ISIS was aggressively recruiting people, mostly the young.

However, a top Philippine military official says there are no actual links between local ISIS supporters and the Middle East. In a report in the New York Times, military spokesman Lieutenant-Colonel Ramon Zagala said there were ISIS sympathisers in the country, but they are just riding on the “bandwagon, trying to connect themselves to ISIS”.

“Based on our information, ISIS is not operating here,” he said.

Reuters news agency reported earlier that two Filipino militants had been killed in battle in Syria, and 100 others had flown to Iran for training before being deployed in Syria. While there are no confirmed ties with ISIS, the Philippines government is monitoring the movement of young Muslims who have travelled to Syria or Iraq and then returned home to spread Islamist ideas.

Intelligence officials have noted a steady but significant rise in the number of foreign fighters going to Syria from the Asia-Pacific region.

This is not the first time Filipino Islamists have declared support to ISIS.

In July, senior Abu Sayyaf leader Isnilon Hapilon appeared in a YouTube video swearing an oath of loyalty to ISIS leader Abu Bakr al-Baghdadi in front of a black banner. Hapilon, who is wanted on terrorism charges and has a five-million dollar bounty on his head from the US authorities, pledged to recruit more ISIS members.

The Philippines government has been battling the al-Qaeda-linked Abu Sayyaf group for decades. It has been accused of kidnapping and extortions, and apart from the two Germans, it also holds several other foreign hostages, including wildlife photographers Ewold Horn from Holland and Lorenzo Vinciguerre from Switzerland.

On September 25, President Benigno Aquino declared support for the US-led campaign against ISIS. Foreign ministry officials are due to meet their State Department counterparts to discuss a possible role for the Philippines in the coalition.

The US and Arab states launched airstrikes on ISIS strongholds in Syria on September 23, and the coalition is already doing so in Iraq.

Jhoanna Ballaran is a project officer with IWPR in Manila.

Philippines
Conflict
Connect with us