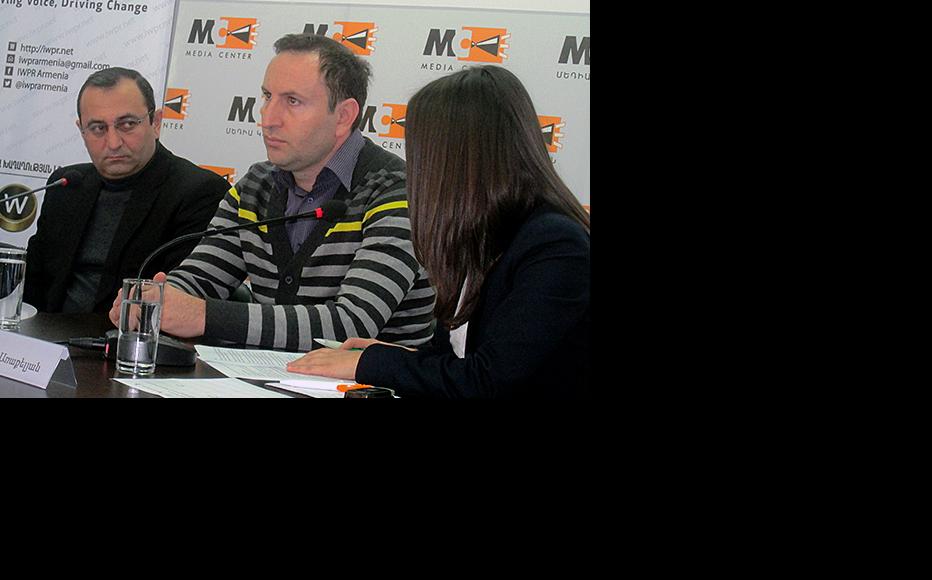 IWPR’s Yerevan office hosted a debate on pension reform on November 26. (Photo: IWPR)
The link has been copied

Younger university lecturers and academics in Armenia are resigning in droves because they fear that higher pension contributions payable under new rules will eat up their already low wages.

So far 120 members of staff  have left – a quarter of the total number who will be affected by new rules that apply to public-sector employees born since 1974.

Salaries in university teaching and academia in Armenia average 120,000 drams a month (290 US dollars) or about half that amount for the many who work part-time.

Under legislation that came into effect in July, everyone born after January 1, 1974 is supposed to make pension contributions calculated at five per cent of monthly earnings up to 500,000 drams (1,200 US dollars) and ten per cent on anything over that. However, those employed in the private sector can opt out of the scheme if they state their intentions by December 25. For state employees, the contributions are mandatory.

The pension reform was originally intended to cover private- as well as public-sector employees and prompted widespread protests earlier this year.

After the law was challenged in Armenia’s constitutional court in January, the government withdrew it and issued a revised version that applies only to the state sector. It still intends to make pension contributions universal from January 2017.

In state-sector academia, many younger staff members are voting with their feet.

Together with ten of his colleagues, Grigor Petrosyan left his job at the Institute of Information Technology and Automation three months ago.

“It isn’t worth anyone pursuing a career in academia or education in Armenia these days since the wages are very low,” said Petrosyan, who was on a salary of 33,000 drams (just under 80 US dollars) a month before he resigned. “Those who remain are simply dedicated professionals who work out of pure enthusiasm.”

"The government needs to understand that the loss of even one lecturer is a great blow to the academic and educational system,” Arsen Tavadyan, who teaches law at Yerevan State University, told IWPR. “It is ultimately young lecturers who sustain academia in our country through their enthusiasm."

To bump up their incomes, many research and teaching staff in state universities and institutes education only work there part-time and take better-paid second jobs in the private sector. If they are under 40, their mandatory contributions will be calculated on both incomes, not just the smaller state wage.

As Tavadyan points out, that means the average pension contribution is likely to come out significantly higher than the state salary earned by someone with two jobs.

“University lecturers… who spend time teaching [in state education] will thus effectively have to pay extra for doing so," he said.

Petrosyan agreed, saying, "Because of the small symbolic amount we earn for the pursuit of science, they will deduct a larger sum as pension contributions. Doing academic work has always been unprofitable… but now it will put you at a disadvantage."

In September, a group of researchers and lecturers wrote to Armenian prime minister Hovik Abrahamyan about their concerns. He responded by telling the finance ministry to make further changes to the system to allow younger lecturers to combine work in the private and public sectors without being unduly penalised.

Despite this pledge, the government has done nothing further. On November 12, young academics held a protest outside the finance ministry to press their case.

"This promise was a trick designed to buy time,” Suren Eyramjyan, a lecturer at the Russian-Armenian Slavonic University, told IWPR. “Two months have passed since the prime minister’s instructions but the promises aren’t being met. Almost all my fellow lecturers have submitted their resignations and stopped working in universities."

Questioned in parliament on November 12, Finance Minister Gagik Khachatryan insisted his office was tackling the problem.

"I assure you that we will solve it,” Khachatryan said. “I think it’s possible there were be certain changes to the legislation."

Meeting journalists the following day, Education Minister Armen Ashotyan urged teaching staff to hang on and wait for a solution, assuring them that “not a single lecturer would lose out”.

Tavadyan has decided not to resign from his lecturing job for the moment, but believes the government needs to take proper action if it wants to maintain a knowledge-based economy.

"Unless the issue is resolved, the worst effects will come over the next year as young academics who have just defended their PhD theses flatly refuse to sign contracts for jobs in education," he said.

Lilit Arakelyan is a reporter for Araratnews.am.