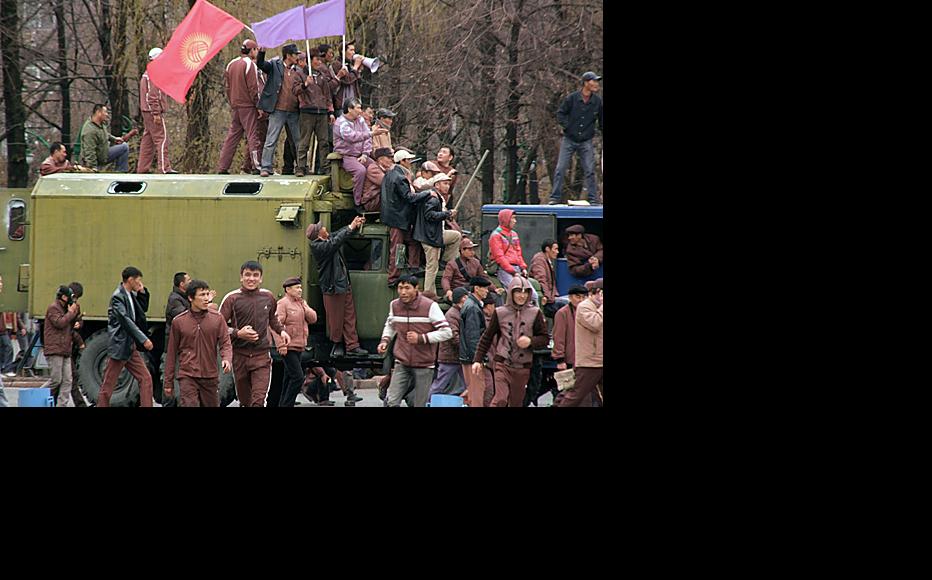 Protests in central Bishkek, April 7, 2010. Photo by Altynay Myrzabekova.
The link has been copied

The opposition in Kyrgyzstan says it has dissolved parliament and taken power after a bloody uprising forced President Kurmanbek Bakiev to flee the capital.

Clashes in the capital Bishkek, and other towns killed at least 60 people as unrest over standards of living boiled over and troops opened fire on the crowds. Around 400 people were injured, according to reporters on the scene. Some reports put the death toll as high as 74.

CNN said Bishkek was calm on April 8 except for small groups of people chanting near the marble government office, known as the White House.

Otunbaeva told a news conference that the former president had fled to the south of the country with his entourage. "The new government would like to locate him to negotiate the terms of his resignation," she said, adding that Bakiev was trying to consolidate his supporters to help restore his power.

"We will not let him come back to power," Abdygany Erkebayev, a former parliament speaker and opposition figure, said.
There was no public statement from Bakiev.

Otunbayeva added that the former prime minister had handed in a resignation letter, and the interim government was now in control based on the constitution.

The new body of power replaces the president and cabinet ministers, she said.

On April 7, several thousand demonstrators marched on the White House, where the president’s office is located, in the centre of Bishkek.

As the crowds reached the White House, units of the OMON special police in full riot gear attempted to dispel them using tear gas and smoke grenades. Protesters attempted to get past the high railings that ring the building but were repelled. A day later, they had taken the building over, however.

“There have been several attempts to storm the White House, but they’ve been driven back,” said a journalist who was on the spot. “There are two ranks of police with combat weapons behind the White House railings. They are using their weapons and tear gas. An OMON vehicle seized by the opposition supporters is now ablaze.”

As the journalist called IWPR’s office with her account, gunfire could be heard in the background.

She said that although the gate had been smashed, no one had got through the fence because of the OMON cordon. The police in turn were staying behind the railings.

Another eyewitness on the scene, who works in the local NGO sector, added, “The people are very aggressive.”

The health ministry issued a statement, reported by the official news agency Kabar, saying that as of ten in the evening, 35 people had died in Bishkek, and there were more than 400 casualties in unrest across the country. An earlier update from the ministry said that most of the 17 dead at that point had suffered gunshot injuries.

What had begun as a fairly routine opposition rally on the morning of April 7 grew rapidly and unexpectedly. Several hundred demonstrators gathered outside the headquarters of the Social Democratic Party, one of the main forces in the United People’s Movement coalition.

The opposition had planned to hold a “kurultay”, an outdoor assembly of supporters, to voice a series of demands including an end to high electricity prices introduced earlier this year, and concerns at the way major privatisations are being handled.

Police failed to contain the crowd, and their numbers grew rapidly as they set off towards the White House, reaching between 4,000 and 6,000 by the time they got there. Some in the crowd were gripping bars and sticks and the mood was tense.

They were joined by hundreds of people coming in the opposite direction from the Dordoy Bazaar, a large outdoor market on the fringes of the city. Eyewitnesses said trading came to a halt at the market.

People at work in the capital were sent home, and some shop-owners removed their stock from store fronts for fear of looting.

The protests in Bishkek were sparked by events the previous day, April 6, in the town of Talas, due east of the capital, where crowds stormed the building of the regional governor’s office, again protesting about high utilities prices.

On April 7, an eyewitness in Talas who works in the NGO sector told IWPR that the situation was “unstable and very tense”, with some 10,000 people still on the streets.

After the seizure of the governor’s office, he said, “People have now surrounded the police department building, but specialised and other police are using… [stun] grenades and tear gas whenever people get too close. The people are very aggressive.”

The Kabar news agency said the interior ministry had denied internet reports that Minister of Internal Affairs Moldomusa Kongantiev had been killed in Talas. The agency later reported that Kongantiev was seriously injured and was being held hostage by protesters inside the regional governor’s offices. It said Deputy Prime Minister Akylbek Japarov was now in the Talas regional hospital after being released by the demonstrators.

IWPR’s contact in the town described the backdrop to the unrest in Talas.

“All this began after they increase electricity prices, mobile phone charges and taxes,” he said. “It came all at the same time, and people simply became aggressive because prices had been dramatically raised without any attempt at an explanation.”

As in Bishkek, the protest began on a modest scale with 50 or so people gathering outside the police building in Talas to voice anger at the detention there of Bolotbek Sherniazov, the Ata Meken party’s man in Talas. Yet by the end of the day there were thousands of people, and the governor’s office was in their hands.

RFE/RL radio’s Kyrgyz service reported that the provincial governor’s building in Naryn, a region south of Bishkek, had also been seized.

Social Democrat leader Almazbek Atambaev, who stood against Bakiev in last year’s presidential election, was arrested, despite the presence of around 200 supporters who surrounded his home.

President Bakiev ordered a state of emergency in Bishkek, Talas and Naryn, with a curfew from ten in the evening to six in the morning. Emergency headquarters are to be set up in each place bringing together police, security, health ministry officials and the towns’ mayors. Public meetings will be banned, police will check personal ID and cars, and weapons and dangerous chemicals will be confiscated.

The final point in the decree says that “the work of political parties that hinder stabilisation will be subject to restrictions”.

Internet connections were lost in Bishkek and Talas. The mobile network was overloaded but still working.

Highways including the main road leading south from Bishkek to the city of Osh were blocked off by police.

Mass demonstrations were a feature of Bakiev’s first few years in office, after his erstwhile allies – the opposition groups which helped him to power after then president Askar Akaev fled the country in the March 2005 “Tulip Revolution” – turned against him.

These protests appear to stem more from grassroots concerns and to be less stage-managed by the opposition parties. In both Talas and Bishkek, groups of opposition supporters were swiftly joined by large numbers of residents, apparently moved to protest by anger over the price hikes rather than by political concerns.

“The public actions now taking place are a response by the provinces to the domestic policy of the Bakiev regime,” said a local analyst, who asked for his name to be withheld. “There’s been widespread anger at the consequences of an economic crisis whose end is not yet sight, at the dramatic and simultaneous price rises for electricity and mobile calls, and at the sell-off of state enterprises and companies of strategic importance.

“This is an ‘overdue penalty’ for the authorities.”

He said that in contrast to the position facing Akaev in March 2005, “the Bakiev regime is a lot stronger… and its law-enforcement agencies are prepared to use force against opposition or popular actions”.

But he warned that choosing to crush the protests could be a mistake.

“Crushing popular actions through force will narrow the window of opportunity for defusing the situation peacefully and holding talks with the opposition. It will place the Bakiev regime in a stark position – it can either hold on to power by force, or else lose it,” he said.

Leading political analyst Mars Sariev believes protests that were driven largely by economic concerns have crystallised into something overtly political.

“I think this has moved into the phase of a growing conflict,” he said.

Sariev said the best hope now was for leaders of other Central Asian republics or other former Soviet Union states to force Kyrgyzstan’s government and opposition into negotiations.