Assaults on opposition may reflect fears that its strength is growing.

Assaults on opposition may reflect fears that its strength is growing. 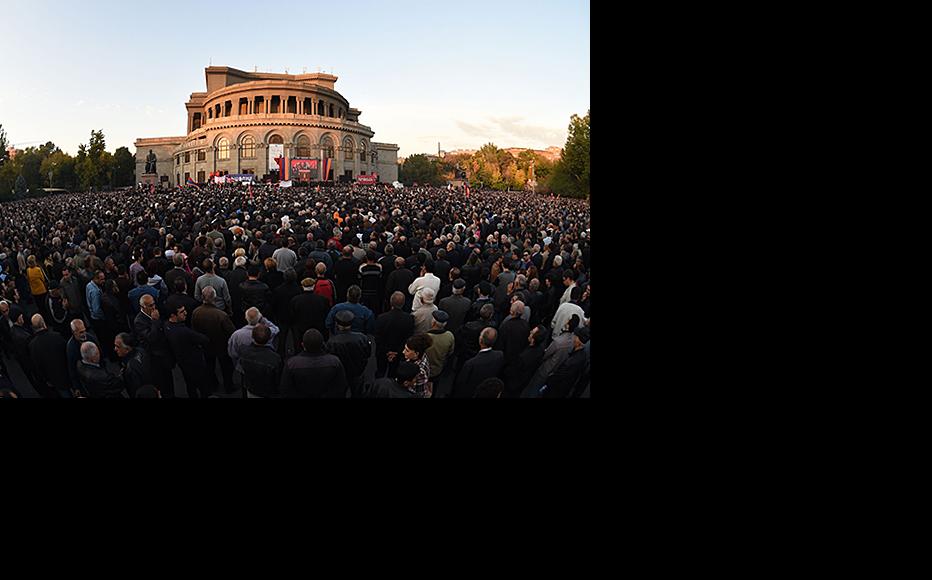 Armenia's opposition has found a new confidence, as shown by this November 2014 demonstration. (Photo: Photolur agency)
The link has been copied

Opposition groups in Armenia have accused the government of ordering attacks on their members. The authorities says they have nothing to do with the wave of violence, but analysts warn that the ugly, confrontational mood will inevitably heighten political tensions.

The wave of attacks began in late November when seven cars belonging to opposition figures were set on fire in the capital Yerevan. The arsonists were not deterred by the fact that one car was parked opposite the city police station and another was outside the premises of the security detachment that protects the Armenian parliament.

Six out of the seven cars belonged to an anti-government group called Pre-Parliament, which was planning to stage demonstrations.

“This is true terror,” said Gagik Sarukhanyan, a member of the group.“The authorities are countering resistance with terror. They want to intimidate us.”

The arson attacks were followed by physical assaults on seven individuals over the following three weeks. The victims included opposition party members, NGO activists and veterans of the Nagorny Karabakh war in the early 1990s.

The first attack, on November 27, was on Pre-Parliament member Gevorg Safaryan. On December 8 and 10, masked men assaulted Manvel Eghiazaryan, Razmik Petrosyan and Suren Sargsyan, all members of the Union of Veterans, a newly-formed opposition group composed of ex-Karabakh combatants.

On December 11, member of parliament Aram Manukyan was attacked near his home and had to spend several days recovering in hospital. Manukyan is parliamentary secretary of the opposition Armenian National Congress (ANC). The same thing happened the next day to Ashot Piliposyan, who heads the ANC party branch in the town of Razdan.

Vaginak Shushanyan, a well-known civic activist who took part in a protest outside the government building in Yerevan to press for the earlier attacks to be investigated, was himself assaulted and badly injured by two men.

The opposition parties represented in parliament, three of which recently formed a coalition called the National Movement, issued a statement urging the government to track down and prosecute the perpetrators and their accomplices in the string of attacks.

Analysts note that the wave of attacks comes at a time of heightened political activity. The next parliamentary election is not until 2017, with presidential polls the year after in which Sargsyan is not eligible to stand again. But the ruling coalition is already facing a mounting challenge from a better-organised, broader opposition. The ANC and the Heritage party have teamed up with the second-biggest party in parliament, the Prosperous Armenia party led by Gagik Tsarukyan, in past years a supporter of President Serzh Sargsyan.

The new bloc, called the Nationwide Movement, is setting up headquarters all over Armenia and building up supporters, including among ex-combatants who have joined the Union of Veterans. People who fought in the Karabakh conflict against Azerbaijan have enjoyed respect and political influence in Armenia since the 1994 truce, and their support has been a significant factor in deciding elections. The emergence of the Union of Veterans as an opposition-aligned force will thus be a matter of concern to the government.

“The authorities are resorting to open acts of terrorism, and it’s obvious what their goal is – they’re trying to break the expanding power of the Nationwide Movement,” said Levon Zurabyan, the ANC’s parliamentary leader.

The ruling Republican Party insisted the authorities had no hand in the attacks.

“It can’t be ruled out that an attempt is being made to turn the veterans and opposition members against the authorities through violence,” deputy speaker Eduard Sharmazanov, a Republican Party member, said. “The authorities have less to gain than anyone else from any action designed to create instability.”

The police have managed to track down one suspect, a man called Arshak Svazyan who gave an interview to the Aykakan Zhamanak newspaper admitting he carried out the attack on Manukyan. He said he gave the ANC politician a “patriotic slap in the face” because, he said, Manukyan had insulted President Sargsyan.

Many Armenians were disturbed to hear a similar expression of aggression coming from the deputy head of Armenia’s police force.Lieutenant-General Levon Yeranosyan told the Zhogovurd newspaper he would “cut off the ears of anyone in this country who tries saying anything about the president in my presence, like [docking] a puppy”.

Two of the Karabakh veterans who were attacked, Eghiazaryan and Petrosyan,said that shortly before making these remarks, Yeranosyanhad met them in a restaurant and told them to stop supporting the opposition. They declined, and minutes after leaving the restaurant, they were attacked by a gang of young men.

Yeranosyan refused to confirm or deny whether the encounter took place. He has been reprimanded for his newspaper comments by his superior, police force chief Vladimir Gasparyan, but the parliamentary opposition parties are seeking his dismissal.

Yeranosyan appears unabashed. He has since given another interview to the same paper saying he stands by his word and will “smash in the head” of anyone who says anything about the president.

Avetik Ishkhanyan, the head of the Helsinki Committee of Armenia, says the lack of an official response is worrying.

“The authorities are constantly talking about human rights and democracy, but all of this shows we’re still living in the Soviet Union,” Ishkhanyan said. “Crimes of violence committed against journalists, activists and opposition members are not being solved, and things are only getting worse. The trend is towards intimidation and spreading fear.”