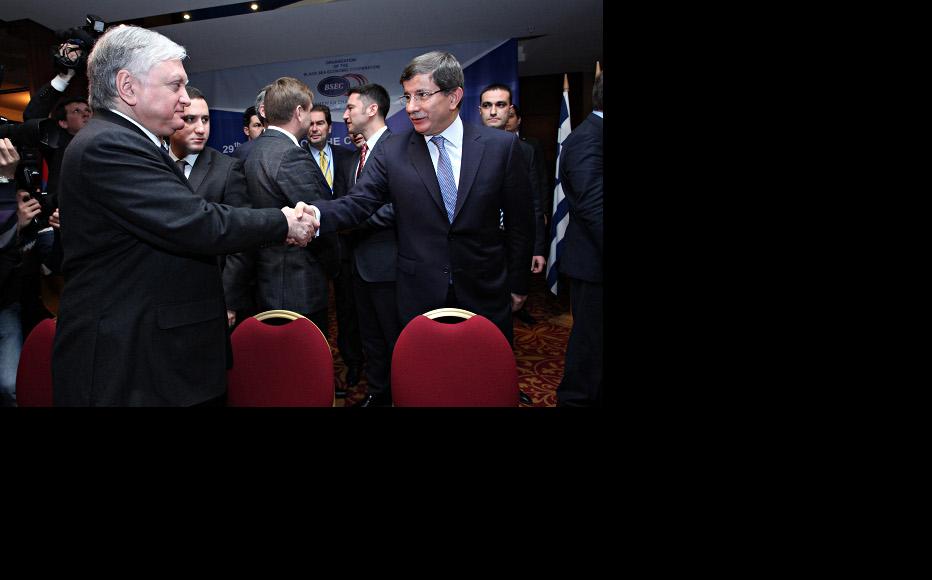 If anyone was expecting Turkish foreign minister Ahmet Davutoğlu’s trip to Armenia – the first such high-level visit in five years – to herald an upturn in relations, they will have been disappointed. Neither side appears ready to give ground on the key issues.

While in Yerevan on December 12 for a meeting of the Black Sea Economic Cooperation Organisation (BSEC), Davutoğlu had a two-hour meeting with Armenia’s foreign minister Eduard Nalbandyan.

Davutoğlu said Turkey wanted the relationship with Armenia to be as good as it was with other neighbours.

He also said the unresolved conflicts in the Caucasus sapped energy that might be better spent on economic cooperation.

“We would like Armenia to move past these frozen conflicts and to become part of our economic projects,” he said.

Although Davutoğlu did not refer explicitly to Nagorny Karabakh, his remarks were read in Armenia as meaning that bilateral relations could not improve before that dispute was resolved.

Karabakh has been controlled by an Armenian administration since the war of the early 1990s, but claims to independence remain unrecognised and the international community regards it as part of Azerbaijan. Mediation efforts have failed to make substantive progress towards a settlement since a 1994 truce ended open warfare between Armenian and Azerbaijani forces.

Turkey, a close ally of post-independence Azerbaijan, closed its border with Armenia and broke off diplomatic relations during the war over Karabakh.

The difficult relationship between Armenia and Turkey long pre-dates the Karabakh issue, however. The two countries are deeply divided on whether a genocide of Armenians occurred in Ottoman Turkey in 1915.

Despite this difficult history, Ankara and Yerevan showed signs of seeking a rapprochement some years ago. In 2008, Turkish president Abdullah Gül paid an unprecedented visit to Armenia, and the following year, the two countries signed accords on restoring relations and opening the border. Neither country’s parliament ratified the agreements, however, and the whole process ground to a halt.

As long as it lasted, the thaw caused consternation and a sense of betrayal in Azerbaijan.

Since then, the Turkish position seems to have shifted. Senior officials including Prime Minister Recep Tayyip Erdoğan have said there will no progress as long as the Karabakh conflict remains unresolved.

Ankara was Aliyev’s first foreign destination after he was re-elected as head of state in October.

Rober Koptaş, an ethnic Armenian Turkish journalist who was part of the press corps that accompanied Davutoğlu to Yerevan, said this now appeared to be an immovable policy – Ankara would not now take actions that might upset Azerbaijan. But he held out hope that progress in the two areas could take place in parallel.

“If negotiations to resolve the Nagorny Karabakh conflict speed up [and] at least some progress is made there... Azerbaijan would be satisfied, and Turkey could go some way towards easing its tense relationship with Armenia,” Koptaş, who is editor-in-chief of the Armenian-Turkish weekly Agos, told IWPR.

“We are seeing Turkey continuing to link normalisation of Armenian-Turkish relations to the Nagorny Karabakh conflict,” he said. “Davutoğlu is using this visit as a primitive form of PR to create the illusion that Turkey wants to revive the normalisation process, when in reality we aren’t seeing of the kind.”

Armenian officials were tight-lipped on the Davutoğlu visit, but Giro Manoyan of the opposition Dashnaktsutyun party said Turkey was probably trying to project itself as a peacemaker as the 100th anniversary of the genocide approached.

“It wasn’t a Turkish minister visiting to Yerevan; he was just participating in the BSEC meeting in Yerevan. Turkey wishes to create the impression that you should expect something to come of Davutoğlu’s visit… but there’s no reason to believe that. Turkey does not in fact want to normalise relations with Armenia; it’s merely trying to create that impression,” he told IWPR.

In Azerbaijan, Leyla Aliyeva, head of the Centre for National and International Studies, said her country’s increasing importance as a supplier of oil and gas to Turkey gave it ever more sway over that country’s policy towards Armenia.

“If the recent Turkish initiative covers the Nagorny Karabakh conflict, Azerbaijan will react positively; if it doesn’t, then I doubt it,” she told IWPR.