More bloodshed as protesters insist resignation of the president must be central to any political deal.

More bloodshed as protesters insist resignation of the president must be central to any political deal. 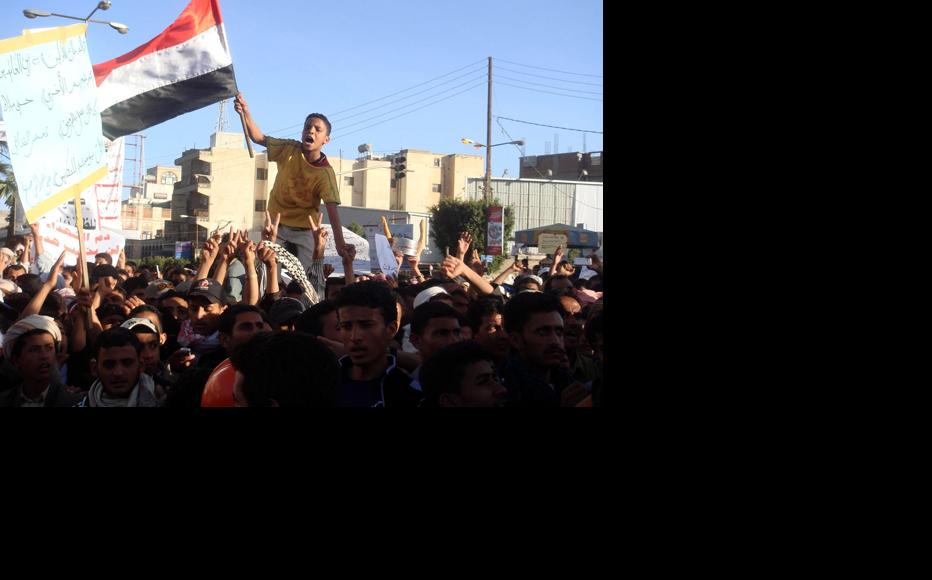 “I wake up in the middle of the night. I go to his room and smell his clothes. Then, I cry like a baby. I even take his shoes and kiss them. No words can describe the pain I feel about losing my son on that day.”

These are the words of a father whose teenage son was one of the 50 killed in the massacre in Change Square in Sana’a on March 18. This grieving father is not alone in his suffering. And while his heartbreak is still fresh, other families are mourning as more protesters in Yemen are killed by government troops.

This week, clashes are continuing in Sana’a between security forces and protesters. At least two demonstrators were killed as they marched down the street leading to the president’s residency.

In Taiz province, some 15 protesters were shot dead and there have been similarly violent scenes in Hodeida. In other provinces, thousands have marched to condemn these atrocities.

These young, unarmed people are at the frontline of protest, literally taking bullets for the sake of a better tomorrow for us and our country. Their blood is very precious and no one can deny how genuine their love is for Yemen.

But it seems we are now facing a stand-off between the willpower of the president, Ali Abdullah Saleh, and the resolve of the protesters. The protesting youth cannot tolerate, and will not accept, any political deal which does not require the head of state to resign.

Therefore, they will keep demonstrating until they realise this, their primary demand. In turn, the more violence they face, the more determined they become. And the more oppression Yemenis face, the more they revolt.

And what is happening in Taiz and Hodeida is also a reminder of how much tougher life is there compared to Sana’a. One friend from Hodeida visited Sana’a and told me, “How lucky you are to live in Sana’a! You have many facilities and institutions in the capital. You have even basic stuff that we just don’t.”

Another friend from Taiz came to Sana’a to find work and told me how frustrating it had been to unsuccessfully search for employment in her home town, or to have any kind of decent life there, even though people from Taiz are renowned as some of the best educated and most hard-working people in Yemen.

“Life is difficult in Taiz,” she said. “The simplest thing is hard to find. For example, we don’t have proper transportation, let alone other facilities. We are completely overlooked! It feels like we live in a village while we live in the city.”

A huge number of Yemenis have emigrated from our country over the years to seek a better life abroad. I believe that they felt they had to leave because of the injustice and the corruption they saw here.

But now we see the possibility of change - today, even though there is bloodshed, we are aware that we are living in an exciting time.

Protesters come from all segments of Yemeni society, united by one demand - to oust Saleh. Contrary to what the president has been predicting about a civil war looming on the horizon in the event of his resignation, representatives of different tribes are protesting together at Change Square, acting in complete harmony.

In fact, there have even been reports of tribes making peace and resolving long-running grudges as a result of this new atmosphere of unity.

There have been news reports here in the state-run media about tribal attacks on the protesters, but they are simply not true. The people carrying out these attacks are just thugs paid by the ruling party to silence dissenters who are marching and chanting, “Leave, Ali, leave!”

These false reports are the result of the media facing many problems covering this revolution. Foreign journalists have been deported and it’s really hard for new ones to enter the country. It feels like we are being shut off from the world.

And yet, Yemenis are sticking together and we will break all the barriers separating us from each other, and from the rest of the world, so our true voices can be heard.

Afrah Nasser is a 25-year-old journalist and blogger from Yemen. http://afrahnasser.blogspot.com/