No Respite for Kabul's Street Children

Tens of thousands beg or sell trinkets rather than attending school.

No Respite for Kabul's Street Children

Tens of thousands beg or sell trinkets rather than attending school. 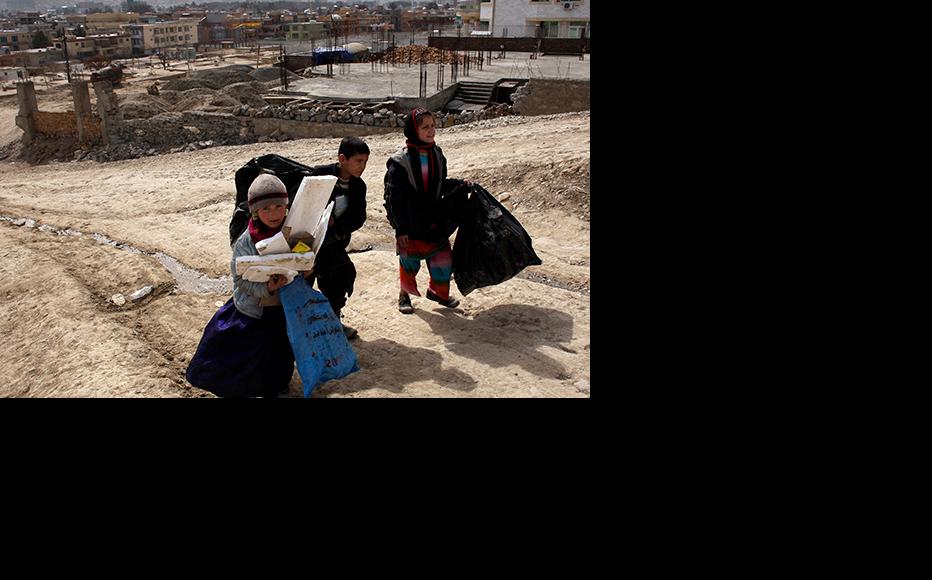 Kids collect garbage on the streets of Kabul to help their families. (Photo: Paula Bronstein/Getty Images)
The link has been copied

Eight-year-old Sohrab spends her days looking through rubbish on the streets of Kabul.

“I collect [empty] cans of Pepsi and then sell them to shopkeepers who buy these old things, and I earn so little money that is hardly enough for bread for dinner,” she told IWPR.

Sohrab is one of tens of thousands of children trying to scrape a living on the streets of the Afghan capital.

Although the reintroduction of universal education is cited as one of Afghanistan’s major achievements since 2001, children selling goods or begging are still a familiar sight in towns and cities across the country.

Not all of them are orphans. Many have been sent to earn a few afghanis by families with no other source of support.

Farzad, eight, said, “My father is unemployed, my older brother is disabled. I am the only one working to earn money for the family. So I’m forced to work and can’t go to school.”

Afghanistan is a signatory to the United Nations Convention on the Rights of the Child and has its own child protection laws, but observers say these are not implemented properly.

It is against the law for children under the age of 11 to do any kind of work, and until the age of 18 they should not be employed more than 35 hours a week.

These rules are clearly not being enforced. Abdullah is among the many children who have dropped out of school to sell knick-knacks on the streets of Kabul.

The United Nations children’s agency UNICEF has estimated that 60,000 children were working on the streets of Kabul alone.

“This number might have now reached over 100,000,” said Najibullah Zadran, the national coordinator for children’s rights in the Afghanistan Independent Human Rights Commission (AIHRC). Millions more children across the country were at risk of exploitation and abuse., he continued.

Fatah Ahmadzai, spokesman for the ministry of labour and social affairs, said that according to the latest government data from 2014, the country’s population had reached 29 million people, of whom 14.5 million were children.

Gul Agha Ahmadi, an adviser to the ministry of education, confirmed that some 9.5 million children were currently enrolled in school.

“Before 2001 [and the fall of the Taleban], there were only one million children registered with us, all boys [because] girls had been systematically deprived of education,” he said. “But this has increased to 9.5 million children, 40 per cent of whom are girls.”

Ahmadzai acknowledged that this still left millions of children potentially at risk. At least two million were not on the government’s radar at all.

He said that they had developed a number of programmes to help children they had identified as being at risk.

“In our long-term programmes, we identified children who had no families to support them and sent them to orphanages where they can receive training,” he said. “Short-term programmes involve children who do have families, we have got in touch with their relatives and helped support them financially. We provided both small and larger loans with the cooperation of organisations so that they can solve their problems and don’t have to send their children to go and work on streets.

“It’s impossible to completely end the problem [of street children], but we are trying at least to decrease their number. Fortunately, the budget the government has approved for this problem by help deal with it.”

Despite numerous interview requests to the ministry of finance to enquire about this budget for the coming year, they declined to speak to IWPR.

Children in this situation also face serious risk of trafficking and sexual abuse, as well as recruitment by insurgents to carry out attacks.

Sadiq Sadiqi, the spokesman of the ministry of interior affairs, said that street children faced a constant threat of violence.

“Every day, there is news that children have been kidnapped and trafficked and sexually abused,” he said, adding that the security services had made numerous arrests of adults suspected of exploiting children.

There was a limit to what they could do to rehabilitate these children, he added.

“We have police departments responsible for dealing with such children, which have not done enough. But we are cooperating with various organisations and care homes, and have enrolled those children in grave need in homes where they will be both given training and helped financially.”

Numerous Afghan and international NGOs also work to get children off the streets. Mohammad Yusuf, the founder of the Ashiana organization, said that they had helped more than 100,000 children complete their education, with some even going on to university.

But Sadiqi acknowledged that there were far too few institutions to find homes for all the children.

According to the ministry of labour and social affairs, there are 42 government-run care homes and training centres for vulnerable children around the country. Private charities run another 45.

Experts fear for the long-term effect that a whole generation of homeless and impoverished children will have on Afghan society.

Psychology lecturer Fawad Farzad said that the impact of such a childhood could not be underestimated.

Young people learnt from their immediate environment, he explained.

“When a child lives on the street and deals with thugs and other bad people, there’s no doubt that they learn from them,” he said. “Nothing can ever change them back if their fundamental education began like that.”