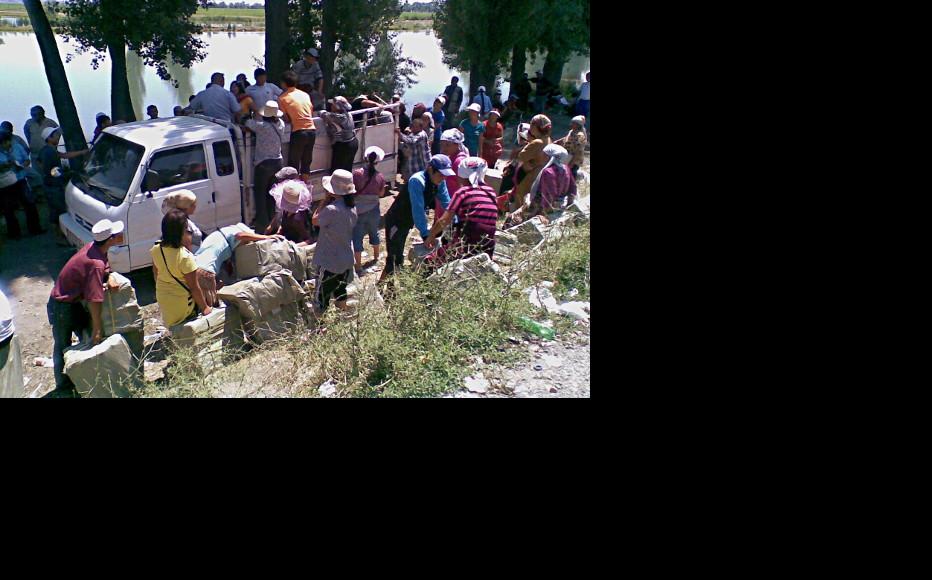 These people, just inside Kyrgyzstan, are being handed goods which they will take over the border into Kazakstan for a fee. (Photo: IWPR) 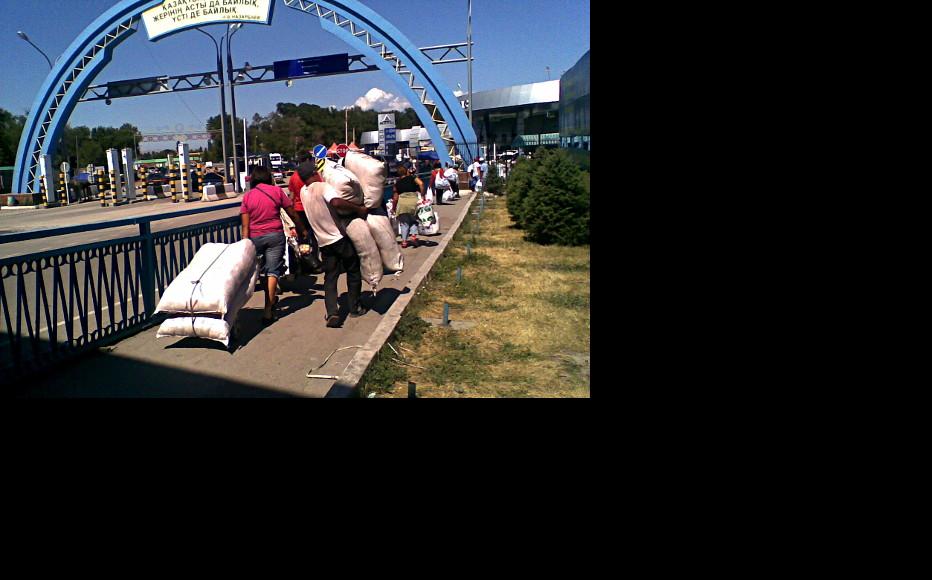 Each person can take up to 50 kilograms duty-free as “personal items”, even though the goods are really part of a large commercial consignment. (Photo: IWPR) 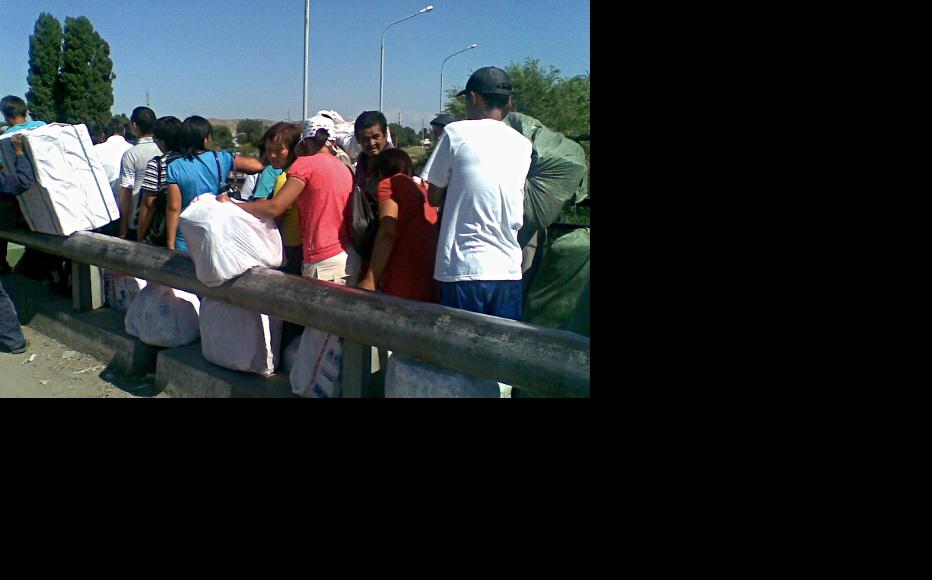 This practice has been tolerated until now, but is likely to be stopped once Eurasian union rules start being enforced. (Photo: IWPR)
The link has been copied

Now that Kyrgyzstan has joined the Eurasian Economic Union, it is required to impose the same border and customs controls as other members. However, analysts doubt this will have the immediate effect of reducing the lively thriving trade in goods smuggled across the Central Asian state’s borders.

Kyrgyzstan, which shares long borders with China, Kazakstan, Uzbekistan and Tajikistan, has developed into a trading hub since it became independent in 1991. As part of the World Trade Organisation, it benefited particularly from low tariffs with fellow-member China, from where masses of consumer goods were imported and then re-exported to the other Central Asian states.

The trade in wholesale goods has provided an income for hundreds of thousands of households in Kyrgyzstan. And it is not always legal; borders are porous and often ill-defined, and officials are sometimes complicit in the smuggling.

On May 8, Kyrgyzstan formally entered the Eurasian Economic Union, a trading bloc comprising Russia, Belarus, Kazakstan and Armenia. Once its accession treaty is ratified by all member states’ parliaments, the Kyrgyz border with Kazakstan will be opened, and the country will have to tighten controls with non-members including China, imposing higher import tariffs on goods brought in from them.

These regulations were designed by the Customs Union, which has existed since 2010 with Russia, Belarus and Kazakstan as its members. The Customs Union was subsumed into the Eurasian Economic Union when it was set up last year with a broader mandate.

The increased customs rates will be accompanied by a drive to tighten border security and clamp down on smuggling.

SMUGGLING ON A MASS SCALE

According to Kyrgyzstan’s economy ministry, the black market is equivalent to 39 per cent of gross domestic product. Smuggling goes on through the official crossings as well as at other points along the often unmarked border, popularly termed the “green channel”.

The customs service in Kyrgyzstan says it intercepted smugglers in 3,000 cases valued at 250 million soms (5.24 million US dollars) at official crossing-points last year, and stopped goods worth 8.5 million soms in 69 interceptions in the “green channel”. So far this year, the figures stand at 104 million and five million soms, respectively.

Experts believe this represents only a small proportion of the total volume of illicit trade.

Tokon Mamytov, a former deputy prime minister who was responsible for security and border issues, told IWPR that 30 per cent of Kyrgyzstan’s trade with Uzbekistan and Tajikistan was illegal.

With China, he said, it was 80 per cent. This is borne out by the discrepancy between trade figures reported by the two governments. Kyrgyzstan says annual trade with China is between one billion and 1.2 billion dollars. The Chinese put it at five billion dollars.

As well as Chinese consumer goods destined for other Central Asian markets, Kyrgyzstan also imports items for domestic consumption. Customs officers say petroleum products including petrol, diesel and lubricants account for the bulk of contraband imports. Fruit and vegetables come in from Tajikistan and Uzbekistan, and cigarettes and alcohol from Kazakstan.

The volume of fuel imported legally from Kazakstan would barely keep a third of the cars in Kyrgyzstan running. Much more comes in through pipes laid across the Chu river on the border with Kazakstan in the north and west, or aboard trucks.

In the south, more petrol is smuggled in from Uzbekistan. Kyrgyzstan’s “commercial crime” police reckon that 30 to 40 large goods vehicles carrying petroleum products arrive in the Batken region from nearby Uzbekistan every day. That is about ten times what this small region needs itself, and 90 per cent of the trucks are just passing through, heading for Tajikistan, also nearby.

Smuggling has become a way of life for many. The customs service estimates that 80 to 90 per cent of the smugglers they catch live in border areas of Kyrgyzstan or in adjacent countries.

Despite the prevalence of smuggling, customs officials are optimistic that they can clamp down on the flow of goods as Eurasian bloc membership requires them to do. The country has receive grants of 200 million dollars from Russia and 100 million from Kazakstan to help upgrade border facilities and tighten up controls.

Checkpoints are being fitted with equipment to carry out veterinary and hygiene checks, as well as X-ray devices and scanners. Systems for sharing information among checkpoints and with central government, the tax office and other Eurasian union member states are also being improved.

Alymbekov told IWPR that all these measures would cut down on smuggling.

“In addition to the renovation of checkpoints, we will strengthen the customs service’s operational units and open the Yug [South] customs office, complete with firearms, vehicles and equipment. Mobile teams will take preventive measures,” he said. “Smuggling evolves fast… but we are hiring more staff to prepare for this.”

Not everyone is so upbeat. Iskender Mambetaliev, deputy head of Kyrgyzstan’s State Border Service, says that on the well-delineated frontier with China, most contraband comes through the official checkpoints. But along the often unmarked border with Tajikistan and Uzbekistan, the bulk of the illicit trade was through the “green channel”, and this would take longer to eliminate.

“Smugglers go through the ‘green channel’, generally in undemarcated border areas where we cannot build structures [fences etc.]. Everyone understood from the beginning that we would have no time to demarcate the border before joining the Customs Union. This situation will endure for another 20 years, and smugglers will carry on crossing through these areas as they’ve always done,” he said.

Mambetaliev agreed that new equipment and documentation procedures at checkpoints would track the movement of goods better. But that would simply encourage the smugglers to seek out new routes through unmarked territory, and the already-overstretched border guards would struggle to cope.

Aside from the fruit, vegetables, petrol and Chinese DVD players moving around the region, there is a much darker side to smuggling – the heroin trade out of Afghanistan. One route goes through Tajikistan and then Kyrgyzstan.

Moscow raised concerns about this during Kyrgyzstan’s accession process, as its embassy in Bishkek says seven tons of heroin pass through the country each year, accounting for ten per cent of the total coming into Russia.

Alexander Zelichenko, coordinator of the Central Asia Centre for Drug Policy, believes that improved scanners and X-ray facilities will not deter major traffickers.

“The situation isn’t going to change,” he told IWPR. “Borders don’t exist for the drug traffickers – they have their own established routes. We might see more people swallowing condoms full of heroin, but that won’t have a significant impact – it’s simply on too large a scale. You need a powerful, well-directed flow to get 70 ton to Russia [annual estimate]. And I believe it’s actually more since Russia officially has more than two million people dependent on drugs. They use airline routes and the railways. One individual can take 20 kilograms through a checkpoints at a maximum, and at huge personal risk.”

Anna Yalovkina is an IWPR contributor in Kyrgyzstan.