Delays in enacting legislation to address longstanding grievances make land as potent an election issue as ever. 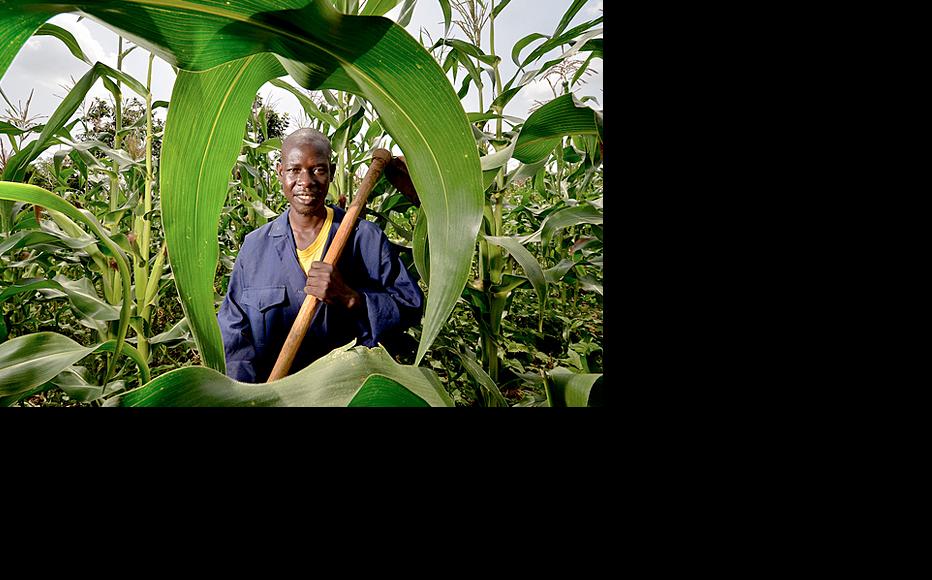 A maize farmer in Kisumu, Kenya. Questions have been raised about the emphasis on traditional methods to resolve land ownership disputes. (Photo: Neil Palmer, CIAT/Flickr)
The link has been copied

A government body tasked with implementing land reforms in Kenya has launched a new strategy which aims to harness traditional methods to resolve disputes and cut down on the number of complaints going to court.

The five-year plan which the National Land Commission published in June focuses on people’s right to own land, and on resolving conflicts over tenure at community level wherever possible.

The Kenyan constitution passed by national referendum four years ago guarantees citizens equal access to land, requires that land use benefits local communities, and prohibits the appropriation of publicly-owned areas.

The National Land Commission is tasked with putting these provisions into practice, as well as with examining historical injustices relating to ownership, and advising on a new programme for registering land titles.

But critics of the commission say it will struggle to deliver reforms as its presence on the ground is limited. They also warn that the idea of local leaders resolving land disputes might have been possible in the past, but will be harder to achieve now that the authority of such figures has been eroded.

Grievances over land ownership in Kenya date back to colonial times and later to the way territory was divided up at independence in 1963. Unequal access to property, coupled with allegations of mismanagement and illegal distribution of public land, is a source of ongoing tension between communities.

Farmland is especially important since the National Land Commission estimates that more than 80 per cent of Kenyans earn their living from agriculture.

EASING THE STRAIN ON THE COURTS

The commission believes that by using local structures such as councils of elders, chiefs and other traditional leaders, disputes can be resolved amicably with a smaller number of cases ending up in court.

The constitution recognises dispute-resolution mechanisms of this kind. Local leaders acting alone or in consort might mediate in a dispute, encourage reconciliation, suggest compensation, or take on the role of a judge by examining the evidence and coming up with a ruling.

The idea is that not only is the dispute resolved, but opportunities are created for an amicable relationship between the disputing parties in future. In contrast, court cases result in a winner and a loser, meaning that relationships can break down irreparably.

“When people talk and express feelings and emotions, then healing and reconciliation begins and thus it is a win-win situation for all parties,” Lucy Gacheru, a qualified mediator, told IWPR. “Where the issue in dispute is land, parties almost always find themselves living side by side. Hence the need to resolve the dispute amicably.”

The deputy chair of the National Land Commission, Abigail Mukolwe, told IWPR that the plan was to engage with local mechanisms and also to involve local leaders at a more formal level within the land boards that exist at county level.

“Each and every community in Kenya has their own council of elders or headmen who understand their history and culture,” she said. “The commission will tap into their wisdom to provide a crucial link in resolving land disputes.”

Mukolwe said the commission was preparing the ground with a public awareness campaign.

“When people know that traditional organs are recognised, they are encouraged to go to them for help,” she said.

While many welcome the initiative, some people worry that it will be undermined by corruption, lack of expertise, and declining public respect for the community leaders who are supposed to take the lead.

Francis Kusero, an elder in Kajiado county in the Rift Valley, agrees with the strategy of incorporating informal leaders into official committees.

“There is no adequate representation of the local community in bodies managing land,” he said. “Those making decisions here know nothing about the people, their culture or their history and this makes it difficult for people to trust them.”

At the same time, Kusero said, the land commission must be careful to pick figures who know enough about the issues at stake and who are able to engage with their communities.

Steve Kore is a member of the Maasai pastoralist group and also comes from Kajiado county. He doubts the land commission’s plans will work because they are based on an obsolete perception of the authority enjoyed by traditional community leaders.

These days, he says, their voices are often drowned out by politicians and businessmen who manipulate land issues for their own gain.

Kore argues that the commission needs to empower traditional councils of elders and local chiefs and work to restore public faith in them.

“Ignorance is driving land problems among the Maasai community,” he told IWPR. “Their ignorance is exploited by politicians and conmen. The commission must come down and talk to the people.”

The Kenya Land Information Network trains elders in Nyanza and the wider western region to use traditional dispute resolution mechanisms. According to one of its senior staff, Ted Wandera, this has been effective in resolving problems and promoting reconciliation within communities.

However, he warns that while traditional leaders know the customs of their own communities, they do not understand the law, and consequently need technical training.

Others have flagged up concerns that the National Land Commission does not have a strong enough presence on the ground to oversee its plans.

George Kimemia, an assistant chief in the county of Kajiado North, told IWPR that his office dealt with land disputes on a daily basis, yet he was unaware of the commission’s plans.

“We have not received any formal communication about the land commission or what they are doing about land,” he said. “Policymakers seem to forget that it is at the grassroots where effective change begins.”

Kimemia claims that many traditional leaders have become corrupt and have lost the respect they would once have enjoyed.

“Old men of high integrity who resolved disputes with honesty and fairness are long gone, replaced by dishonest people at the land offices,” he said. “People pay a lot of money to have their cases heard and determined in their favour. There is no justice.”

He said this kind of corruption would need to be addressed before local elders could offer a viable alternative to the courts.

“Many people prefer to go to court to resolve their disputes. They seem to think that the court is the only place where they can get justice. So if one complainant brings the case to us, the other will ignore summons and choose to go to court,” he said.

Mukolwe defended the commission against claims that people were unaware of its plans, saying it had already embarked on a public education and advocacy campaign, and had enlisted the support of civil society groups.

She acknowledged that the process would take time, and also that corruption was a major challenge, adding that the commission would work with police to tackle it.