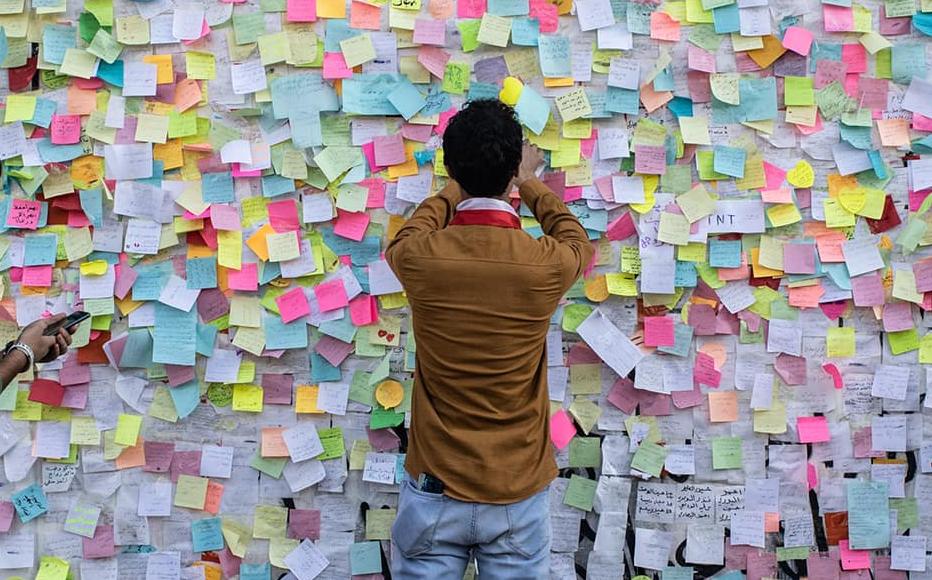 Demonstrators paste wishes on post-it notes on the "wish wall" in Tahrir Square on Nov. 22, 2019 in Baghdad, Iraq. © Erin Trieb/Getty Images
The link has been copied

Freedom of expression in Iraq faces a danger unprecedented since the Saddam Hussein era.

After his ousting, the country adopted a new constitution in 2005 that guaranteed freedom of speech. For the first time in decades, citizens were - at least theoretically - free to criticise political and religious leaders, whether through the written word, broadcasting, or in peaceful street protests.

It is true that progress has been painfully slow, with journalists facing intimidation and public protest often repressed. But at least the law stood on their side. Now 15 years later, the Iraqi parliament is poised to approve a controversial law that will cast a shadow over all forms of expression online, from social media to bloggers and the country’s struggling independent outlets. This move has been backed by the majority of the political elite and fuelled by the support of religious leaders.

The innocuously named Law on Information Technology Crimes will introduce massive fines and long prison sentences for a range of supposed offences that include simple criticism of the state.

Any citizen who expresses negative opinions about a government official or complains about poor services could be deemed to be threatening the country’s “independence, unity, safety and its economic, political, military and security interests” and liable to life imprisonment and fines of between 25 and 50 million Iraqi dinars (21,000- 24,000 US dollars).

The same penalty could be applied to anyone “disturbing the general peace and security, and defaming the country’s reputation”.

Another article imposes a minimum one-year prison sentence for “any person who encroaches on any religious, moral, family, or social values or principles or the sanctity of private life”.

The bill also includes more legitimate provision to penalise online activity connected with crimes including fraud, money laundering and illicit monitoring. But other offences are so vaguely defined that it prepares the ground for clear and unfettered government repression.

It’s hard to imagine a law that could be worse for freedom of opinion and expression.

It’s no wonder that this bill has sparked outrage both within Iraq and further afield. First drafted in 2011 as the similarly blandly-titled Law to Combat Electronic Information Crimes, it was brought before parliament in 2013 but withdrawn after pressure from local and international NGOs.

Attempts to revive have been met with concerted protest. Just last  year, a coalition including Amnesty International, HRW, the Iraqi Observatory for Human Rights (IOHR) and PEN condemned the draft law they said “would severely undermine fundamental right to freedom of expression”.

The text goes against many aspects of the Iraqi constitution, including Article 38 that protects freedom of speech for civilians and journalists. It also contradicts numerous international conventions and norms of free expression that Iraq is signatory too.

If passed, as it is likely to be, this law takes Iraq back to the dark times when freedom of opinion was criminalised.

Theoretically, under the new law, this piece of writing itself could be construed as a threat that could see its author imprisoned and the platform publishing it fined or shut down.

Iraq was already one of the most dangerous places in the world to be a journalist. Activists have also been kidnapped, arrested and even killed for participating in peaceful protests. This law would formalise such violations in the online sphere, too.

In October 2019, Iraqi youth took to the streets in peaceful demonstrations to demand freedom, reform and human rights. The state responded by shutting down the internet and violently repressing the protests. Undeterred, the youth continued to pour out on the streets, their movement only derailed by the start of the coronavirus pandemic.

Much of their activism then went online. As IWPR’s own work in Iraq has shown, the virtual sphere can be a powerful platform to drive social change, expose wrongdoing and promote human rights and reconciliation.

We must all speak out – while we can – about a law that threatens to silence a whole social movement along with any expression of dissent. The very government institutions that should be protecting the media and ordinary citizens’ right to freedom of speech are at this moment preparing to strangle it.