Plenty of promises, and warning that officials from previous government could be investigated.

Plenty of promises, and warning that officials from previous government could be investigated. 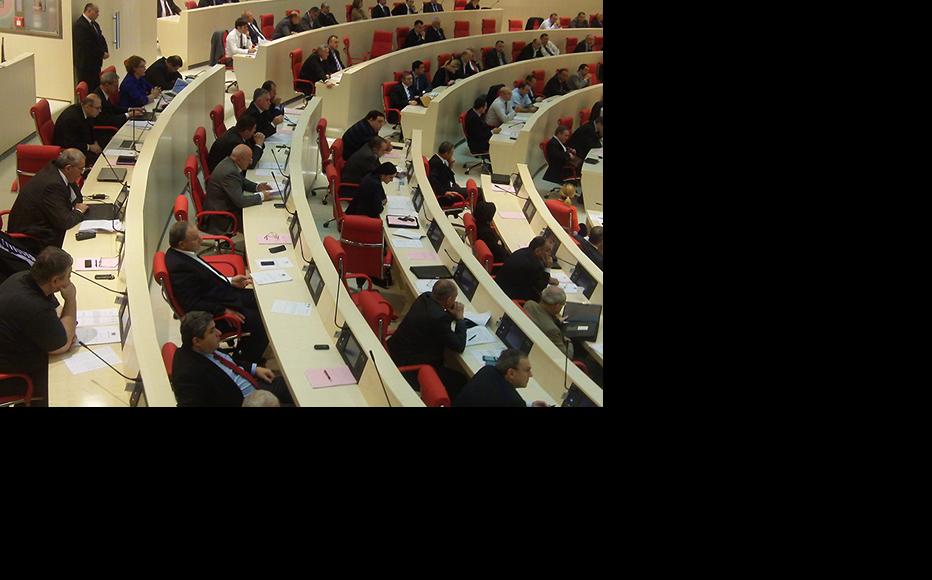 Georgia’s parliament has moved from Tbilisi to new premises in Kutaisi. (Photo: Akhali Gazeti)
The link has been copied

Georgia’s new leaders spent their first week in parliament launching probes into the actions of the previous government and announcing far-reaching reforms in almost every area of national life.

The newly-elected parliament held its first meeting on October in its new home in the western city of Kutaisi. It is dominated by the Georgian Dream coalition, which gained 85 of the 150 places in parliament in the October 1 election, leaving President Mikheil Saakashvili’s allies with just 65.

This is the first time in Georgia’s recent history that power has changed hands peacefully.

Georgian Dream has formed a new government, with its leader Bidzina Ivanishvili as prime minister. It is the first administration for eight years not dominated by President Mikhail Saakashvili’s United National Movement.

The billionaire Ivanishvili only entered politics a year ago, making his ascent to power almost as dramatic of that of Saakashvili himself, elected president after 2003’s bloodless Rose Revolution.

Under constitutional changes adopted two years ago, Georgia’s president is due to become a figurehead, leaving power in the hands of a prime minister appointed by parliament. Although the changes do not come into effect until after next year’s presidential poll, Saakashvili bowed to the inevitable and appointed Ivanishvili prime minister.

Addressing the new parliament, Ivanishvili said he would step down voluntarily in 18 months’ time, but was confident other members of his Georgian Dream coalition would be capable of running the country and nurturing the fragile shoots of democracy.

“We must do all we can so that the precedent set on October 1 becomes a tradition,” new speaker David Usupashvili told deputies. He urged Saakashvili not to try to exercise the powers he formally retains.

Georgian Dream lacks the two-thirds majority in parliament it would need to change the constitution and thus deprive the president of the powers he will hold until next year.

“The political realities have changed. These amendments should have entered into force earlier, without us having to wait until next autumn. That would mean the president could stay in post as an arbitrator but without influence on the executive,” Usupashvili said.

In its first week, parliament’s human rights committee, headed by Eka Beselia, pledged to establish a special commission to examine the records of officials from the Saakashvili years.

“All guilty parties must be punished for crimes committed in this period,” Beselia said.

The commission will look into cases of high-level corruption, criminal cases that may have been launched for political reasons, and deaths under suspicious circumstances. It will also examine the media, advertising and petrol markets, all said to be dominated by a Saakashvili ally.

Giorgi Jvania, a Georgian Dream member of parliament, wants the commission to look into the death of his brother Zurab, who was prime minister when he died in 2005. The official explanation of his death, that he was poisoned by carbon monoxide in a domestic accident, is widely questioned.

Other members intend to re-examine the war with Russia in August 2008, and why Georgia lost so quickly despite having vastly increased its military budget. Irakli Sesiashvili, the new head of parliament’s defence committee, said the task should be entrusted to former officers who lost their jobs in the armed forces.

“There are many problems in this area. The situation is worse than we thought, and this is because defence was being run by non-professionals. There are no professionals left, so we have to start from scratch,” Sesiashvili said.

The new government also promised major reforms to make the country stronger and more democratic. The planned reforms include changes to the court system, local government, the interior, defence, the economy and finance ministries, and other institutions.

The government also plans to hand over responsibility for refugees to the “governments in exile” of Abkhazia and South Ossetia, two regions claimed by Georgia but ruled by Moscow-backed governments outside Tbilisi’s control.

Ivanishvili also promised to keep a promise he made during the election campaign, to raise pensions to 220 laris (130 US dollars) a month, but declined to say when he would do so.

“It depends on how much investment we can attract, and how many jobs we can create, and by how much we can raise the earnings of every family. This will work in parallel with increases to the budget. It isn’t possible to be specific about the timescale, but it is realistic in the near future,” he said.

Giorgi Gabashvili, head of the United National Movement’s parliamentary group, said the plans were unrealistic and ineffective. He also questioned Ivanishvili’s offer to fund state programmes out of his personal fortune.

“We are probably the first country in the world where a candidate for prime minister has said he’s unfamiliar with the budget but will finance health and agriculture programmes out of his own pocket,” Gabashvili said. “I’ve never seen a country anywhere where instead of a specific plan, you hear a promise that, if the country’s budget isn’t sufficient, he will add his own money.”

Most independent experts, however, including as former economy minister Vladimir Papava, were willing to give Ivanishvili’s team the benefit of the doubt.

“You can’t create a government that pleases everyone. You’ll always find people who are unhappy with one minister or another. But, although some members of the government are not to my taste, in the main I’m pleased with them,” he said. “There are significant differences between the new government’s plan and the Georgian Dream electoral programme. The government’s programme is smaller, but the basic thrust is the same.”

Papava said it was unfair of Saakashvili’s allies to criticise the government programme for being vague and sometimes contradictory, since that was precisely how their own strategies looked when they were in power.

“The new government’s programme is a lot more solid, although it still falls far short of the standards you should expect from a government,” he said.

Georgia
Democracy
Connect with us