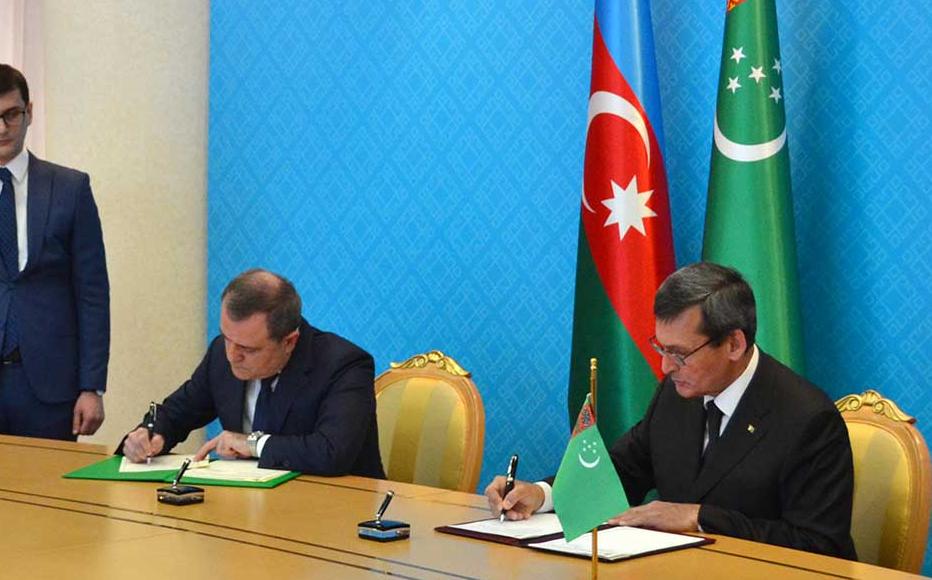 The ceremony of signing the memorandum by the head of MFA's of Turkmenistan and Azerbaijan in Ashgabat city. © Ministry of Foreign Affairs of Turkmenistan
The link has been copied

The breakthrough agreement between Turkmenistan and Azerbaijan to jointly explore and develop an energy field whose ownership had been disputed for nearly 30 years has cleared the way for the long-anticipated Trans-Caspian pipeline to Europe.

But analysts warn that there may no longer be the demand among European states to meet potential supplies.

The Dostluk field in the Caspian Sea - previously known as Serdar by Turkmenistan and Kapaz by Azerbaijan - had caused serious tensions between the two countries since the fall of the Soviet Union.

Although its exact reserves are unknown, they are estimated at 50-100 million tonnes of oil and 30 billion cubic metres of gas. The amount is not particularly significant - for comparison, gas reserves at Turkmenistan’s Galkynysh field amount to 21 trillion cubic metres – but the long-running dispute had hindered negotiations on a Trans-Caspian pipeline to facilitate Turkmen gas supplies to Europe via Azerbaijan. Dostluk, the new name for the field – Dostlug in Azerbaijani - is highly symbolic because it means friendship in both languages.

Consultations over the Trans-Caspian pipeline have been ongoing since the 90s. The East-West pipeline, completed in 2015, links the largest oil field in the east of the Turkmenistan to the coast of the Caspian Sea. With the construction of gas channels connecting Azerbaijan and Europe in in October 2020, the Trans-Caspian project is the only missing link to sending supplies of Turkmen oil and gas to the EU.

The presence of the presidents of both countries, via video conference because of the pandemic, highlighted the diplomatic significance of the January 21 memorandum of understanding.

Turkmen president Gurbanguly Berdimuhamedov noted in his address that the key principles of the joint exploration would be “solidarity, mutual respect and support.”

“The signing of the memorandum marks a principally new stage in the cooperation over energy between Turkmenistan and Azerbaijan in the Caspian Sea,” Berdymukhamedov said, adding that fresh opportunities for cooperation “based on solid international law” would be created, as well as serious incentives for large-scale foreign investments.

“The project will promote the improvement of energy security of our countries, as well as our neighbours,” added his Azerbaijani counterpart Ilham Aliyev, emphasising that the signing of the memorandum had only been possible due to close political interaction between the two countries at all levels.

According to the vice president of investments and marketing of the State Oil Company of Azerbaijan Republic (SOCAR), Elshad Nasirov, working groups are to now agree on the infrastructure to be built on the field, on the interests in investments, and on the allocation of profits at the negotiations.

The vice rector of Azerbaijan’s ADA University, Fariz Ismailzade, stressed that the memorandum presented new opportunities not only in the energy sector, but in bilateral and regional relations.

“I think transport and energy corridors connecting the Caucasus and Central Asia will be again relevant now,” he concluded.

Azerbaijani lawmaker Rasim Musabekov argued that it was most sensible to connect Dostluk with Azerbaijan’s Azeri field, just 15 kilometres, away via a pipeline. The Azeri field is being developed under the Azeri-Chirag-Guneshli project and has all necessary infrastructure in place.

“It will reduce the project costs significantly,” he said, adding that oil and gas from this field, including that of Turkmenistan, would be transported westward across Azerbaijan.

Stanislav Pritchin, senior fellow at the Centre for Post-Soviet Researches of the Institute of World Economy and International Relations of the Russian Academy of Sciences, agreed it would be more efficient to connect future infrastructure to that already available at the Azeri-Chirag-Guneshli project.

“Thus, the gas produced from this field will be an extra raw materials base for the Southern Gas Corridor,” he said.

There are two possible options for exporting gas from the Dostluk field; through Azerbaijan to the west, or through Turkmenistan to the east. Neither Baku nor Ashagabat have specified which route they want to explore.

Fabio Indeo, an analyst at the Observatory for Central Asia and Caspian (OACC), said that exports from the Dostluk field should be supplied to Turkish and EU markets via Azerbaijan.

He continued, “It is a nonsense to envisage an eastward direction of exports, for several reasons: distance of the markets, Azerbaijan’s interest to increase exports to the westward directions and, above all, the strategic need of Turkmenistan to diversify export routes, so opening the westward export corridor so reducing its reliance on Chinese markets.”

However, experts see the construction of the pipeline as highly unlikely due to the developing situation in the European gas market.

Currently dependant on supplies from Russia, Europe has begun to source liquified natural gas (LNG) from other countries. But EU legislation envisages a gradual switch from gas to cleaner sources of energy. This means it will be hard for Turkmen gas to compete in the EU market and sales may not meet investment requirements.

“Today, the competition on the European market makes it very difficult for the Trans-Caspian pipeline with new producing capacities in Turkmenistan to pay off reliably,” Pritchin said.

According to Marco Giuli, a researcher at the Institute for European Studies in the Vrije Universiteit Brussels, European gas demand is set to stabilise over the next decade. It will then sharply decline if Europe pursues its climate neutrality plans, which, he noted, was “not a good context for a pipeline with 50 plus years life cycle”.

In addition, Giuli noted that the European Investment Bank will be giving no more support to fossil fuel projects. The European Commission has proposed to not support natural gas projects anymore through the TEN-E framework, which also means no access to community funding.

Under these circumstances, no strong appetite for the Trans-Caspian pipeline was to be expected from private actors.

Jonathan Stern, founder of the Natural Gas Research Programme at the Oxford Institute for Energy Studies, noted that the Green Deal - the 2019 strategy approved intended to form a carbon neutral space in the EU in for the next 30 years - and other reduction targets, all new gas arriving in the EU will need to be decarbonised. No one would sign a new long-term contract for natural gas unless it could be easily decarbonised, he said, adding, “This reduces even further the prospects for Turkmen gas supplies to Europe.”

In addition, Western countries often warn their business people that Turkmen legislation does not adequately protect foreign investments, with law subject to being changed by decree or ignored with impunity.

Annette Bohr, a Central Asia analyst with Chatham House, said there major impediments to the implementation of the Trans-Caspian pipeline project included lower commodity prices and Russia’s wariness about the amount of gas shipped to Europe by Azerbaijan and Turkmenistan.

She said that Turkmenistan had also historically refused to grant foreign investors equity stakes in upstream fields, apart from China, concluding that “Turkmenistan can be its own worst enemy in terms of the way it chooses to deal with international oil companies”.