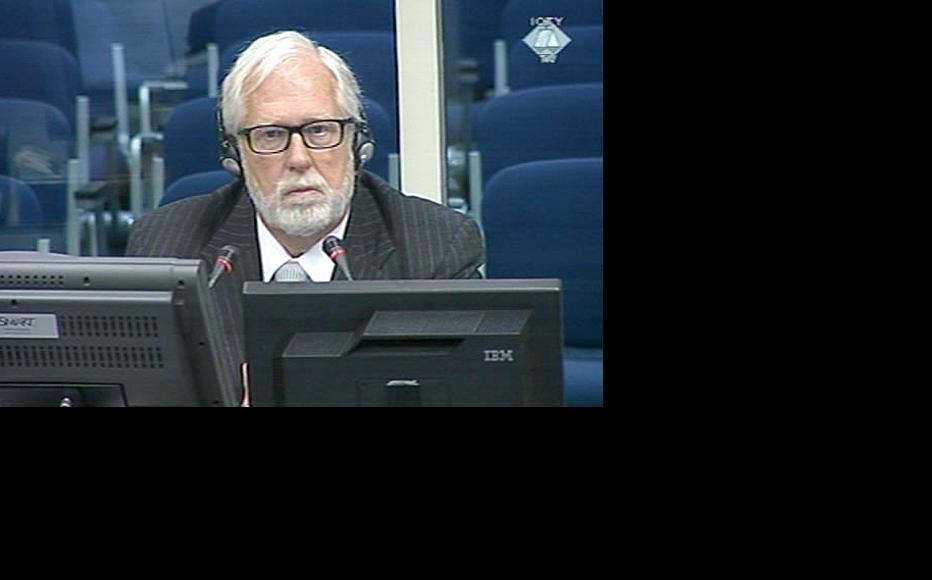 Robert Donia, witness in the Mladic trial. (Photo: ICTY)
The link has been copied

A historian testifying in the trial of Ratko Mladic this week discussed the significance of the defendant’s reference to the possibility of genocide if Bosnian Serb leaders’ objectives were carried out.

In the statement, taken from the transcripts of a May 12, 1992 Bosnian Serb assembly session, Mladic said that “we cannot cleanse, nor can we have a sieve to sift so that only Serbs would stay, or that the Serbs would fall through and the rest leave. I do not know how [assembly speaker] Mr Krajisnik and [Bosnian Serb president] Mr Karadzic would explain this to the world. People, that would be genocide.”

According to witness Robert Donia, a research associate at the University of Michigan who has testified in several other trials at the Hague tribunal, the Bosnian army chief made the comment after “expressing his concern that civilian leaders were formulating goals that couldn’t possibly be achieved by those who were supposed to implement them”.

These goals, known as the “six strategic objectives” of the Bosnian Serb leadership, were adopted at the May 12 assembly session. The first objective was the “demarcation of a [Serb] state as separate from the other two national communities”, while according to Donia, the others were geographical in nature, “defining the territory within which the first goal should be achieved”.

“[Mladic] repeatedly emphasises that the army can only do so much and the limited possibility of achieving this, both because he felt that Serbs couldn’t rule over areas where no Serbs live and they didn’t have the military wherewithal to accomplish it,” Donia said.

Donia said the defendant’s reference to a potential genocide “stands out as a particularly harsh warning against taking these actions and [he is] fearful of the consequences of it. He’s using the word here for its shock value because it doesn’t appear in very many other contexts with this application.”

Presiding Judge Alphons Orie interjected, asking whether the comment had been a “warning to the political leadership”.

“It was a warning to all Serbs, really,” the witness replied.

He said that in his analysis of various sessions of the Bosnian Serb assembly, the word “genocide” is only used twice when referring to something the Serbs might potentially do to others. It occurs 12 times in reference to something that has, or could, happen, to the Serbs themselves, Donia said.

“By consensus, genocide was a dirty word that Serbs were not capable of engaging in and hadn’t engaged in, and [the word] shouldn’t be deployed in discussions that were ongoing,” the witness said.

Therefore, Donia said, when Mladic used the word “genocide” it was to assign a “shock value to certain activities he believed were going on, or might go on through the overly ambitious programme that the leadership was advocating”.

Prosecutors allege that Mladic, commander of the Bosnian Serb army from 1992 to 1996, is responsible for crimes of genocide, persecution, extermination, murder and forcible transfer which "contributed to achieving the objective of the permanent removal of Bosnian Muslims and Bosnian Croats from Bosnian Serb-claimed territory".

The genocide charge relates to the massacre of more than 7,000 men and boys at Srebrenica in July 1995.

Mladic is also accused of planning and overseeing the 44-month siege of Sarajevo that left nearly 12,000 people dead.

Donia said that while Bosnian Serb president Radovan Karadzic got along well with his top civilian deputies – Momcilo Krajisnik and Nikola Koljevic in particular – “that level of cohesiveness did not exist with Mladic”.

“The three political leaders often met informally and scripted what was going to happen, and believed it was their duty to set goals, to prescribe policies, and that it was General Mladic’s duty to carry them out,” Donia said.

“Yes, it did in the main. A great deal of heat was generated between them about these policies. In particular in assembly sessions, these clashes became quite pronounced. But looking at the overall policy implementation, Mladic did carry out those policies,” the witness replied.

“Was there any misunderstanding as to what was expected of Mladic?” Bibles asked.

“I don’t have any evidence that he didn’t understand what the orders were,” Donia said.

“So you are not a political scientist and you don’t have any training in that field?” Lukic asked him.

“I am not a political scientist,” Donia confirmed.

Lukic then asked the witness to confirm that he was not an anthropologist, a sociologist, a psychologist, a demographer, a statistician, a lawyer or a military expert.

Noting that Donia worked for the financial company Merrill Lynch from 1981 to 2000, he asked him whether he worked there full time. Donia said that he did.

“Did you ever receive a salary as a historian?” Lukic asked.

“How many years would that be, if we look at your entire career?” the defence lawyer asked.