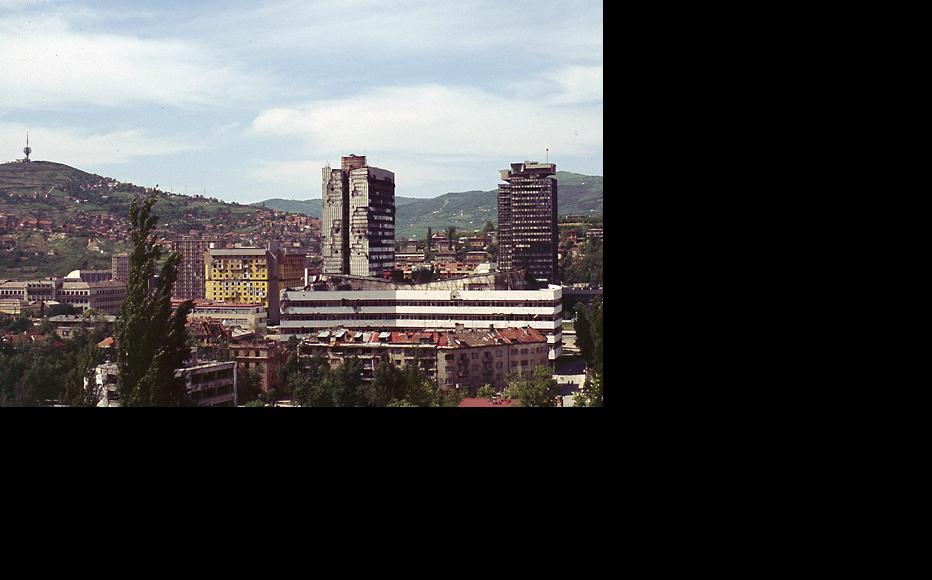 Buildings devastated during the 1992-95 siege of Sarajevo. Photo taken in May 1996. (Photo: Quasimodogeniti/Wikimedia Commons)
The link has been copied

A former Bosnian Serb soldier who acted as interpreter for United Nations peacekeepers in Sarajevo said this week that gunpowder and mortar fuses were smuggled to the Bosnian government army, disguised as aid shipments.

The indictment – which lists 11 counts in total – alleges that Mladic is responsible for crimes of genocide, persecution, extermination, murder and forcible transfer which “contributed to achieving the objective of the permanent removal of Bosnian Muslims and Bosnian Croats from Bosnian Serb-claimed territory”.

The prosecution has claimed that Mladic and other senior Bosnian Serb officials blocked humanitarian aid from entering the besieged city.

The reporter states that “two oxygen tanks were opened in the presence of UNPROFOR [UN Protection Force] – in one gunpowder was found, and the other was filled with mortar fuses”.

Pejic confirms the reporter’s assertions and says his staff discovered that two of the five oxygen tanks “did not contain oxygen; they were much heavier than the others”.

The defence lawyer asked the witness, “Were you present at the scene?”

“Yes, I was present at the scene. In fact Dr Pejic had called in the UNMOs [UN Military Observers] and we were the first team who arrived there,” Batinic said. “We established already in the depot that they contained gunpowder, these tanks, and after that members of the French [peacekeeping] battalion were called in, along with TV crews. But in the first part, when the tanks were opened inside the depot, we were only ones there and I was the interpreter.”

“Was it established that one tank contained mortar fuses and the other gunpowder?” Lukic asked.

“Yes, we opened the first tank also, and a minute after, the gunpowder turned into some kind of emulsion, a gel-like substance. Probably because of contact with the air,” the witness said.

The prosecution then interjected to ask about the provenance of the video footage.

“This was footage made by local Serb TV, but we arrived before the TV crew and in the depot we opened one of the tanks. I am certain it is 1992, I would guess October or November. I was wearing a blue jacket and [it was] rather cold,” the witness said.

Batinic said that shortly after the February 1994 incident, he interpreted for a Danish UN military observer who was trying to establish “direct contact” with General Stanislav Galic, the commander of the Bosnian Serbs’ Sarajevo Romanija Corps.

The pair ended up driving to a hotel where Galic was attending a meeting, and although they were not able to speak to the general himself, his “security man” Colonel Marko Lugonja was sent to greet them instead.

“When we told him what happened [at the market], I noticed that Colonel Lugonja was astonished. His comment was, ‘That’s impossible, the Serb side did not do this, we are not stupid to do that because there are negotiations going on right now, somewhere abroad. Come back in an hour and I am going to give you all the necessary information, I will check what it was that happened,’” the witness said.

An hour later, Lugonja came back and, according to the witness, started to play a videotape which he said had been recorded by his security service.

“As we were viewing this, he said, ‘Pay attention to what is happening here. Take a look at these two men who are running away from the scene. This is suspicious. There is some plastic leg there, how come that is there; there is no body there?’ Then he said, ‘Look at these pyramids of potatoes on the stalls, not a single potato had fallen, not a single bottle was broken,’” Batinic said, recounting the comments.

According to the witness, Lugonja said that his security service “intercepted a conversation between two ambulance drivers on the Muslim side and one is telling the other in coded language, ‘Bring me more icicles.’”

Lugonja told the witness that because of these oddities, and the “enormous number of casualties”, he was convinced the attack was “rigged”.

The allegation that the massacre was staged is not new. Wartime Bosnian Serb president Radovan Karadzic made similar claims throughout his trial, and contended that bodies found at the scene were “dummies and old corpses”. (See Karadzic's Markale Fraud Claim Disputed.)

At the beginning of its cross-examination, the prosecution spent a good deal of time asking the witness about the exact way he gave his statement to investigators on Mladic’s defence team, followed by several questions about people he knew or associated with during the war.