Lawyers go over details of account from man badly injured by 1995 blast at Sarajevo market.

Lawyers go over details of account from man badly injured by 1995 blast at Sarajevo market. 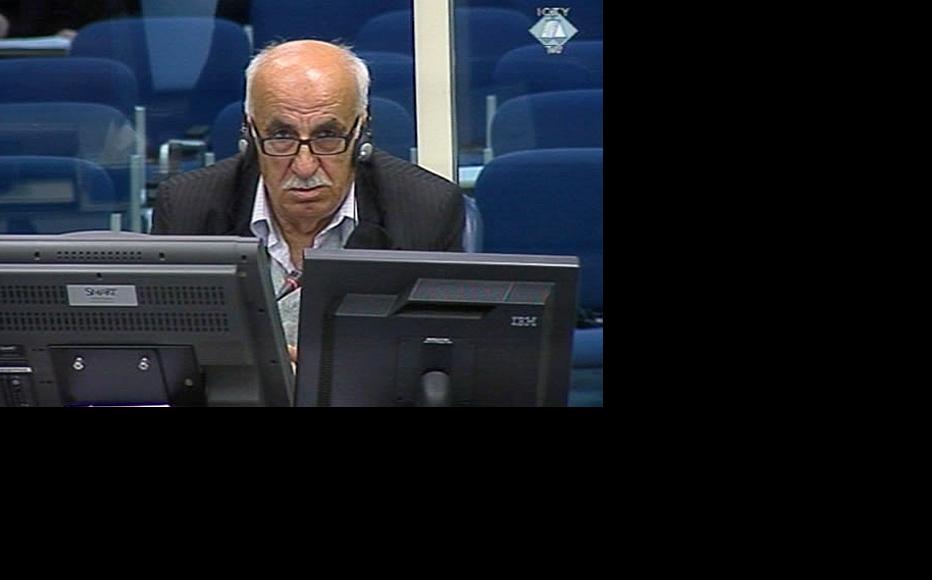 Ismet Svraka, a prosecution witness in the trial of Ratko Mladic. (Photo: ICTY)
The link has been copied

A man whose leg was blown off in a 1995 mortar attack on Sarajevo’s Markale market testified at the Hague tribunal this week about the multiple injuries he suffered and their continued impact on his life.

Ismet Svraka, a prosecution witness in the trial of wartime Bosnian Serb army commander Ratko Mladic, entered the courtroom on crutches. When the bench asked him to make the solemn declaration required of all witnesses, he asked to remain seated, since he finds it hard to move around.

In addition to the loss of his left leg, 68-year-old Svraka said two toes had to be amputated on his right foot, which was “practically cut in half by the shell”.

He told the court he still suffered from stomach pain and intestinal problems caused by shrapnel in his abdomen.

“My leg is never going to grow back. All of you can see how disabled I am…. But you have to go on living,” the witness said, wiping his eyes with a handkerchief.

According to the prosecution’s evidence summary, on August 28, 1995, Svraka travelled to Sarajevo’s city centre to deliver a letter to his sister, taking back streets so as to avoid snipers. After that, he went to the Markale market, where he saw a lot of people in the street in front of it, but did not notice any “military posts or installations” in the area.

Svraka came across two friends and they stood together in front of the market building, smoking and talking. The two friends had their backs to the building and he was facing them.

Suddenly, a shell exploded and “there was shouting, there was panic”, the witness said.

The witness said he was thrown into a car and taken to the hospital, and was in and out of consciousness during the ride there.

The prosecution showed two video clips depicting the aftermath of the explosion. In the first one, piles of contorted bodies are seen lying on the ground amid pools of blood and debris. Some are lifted into nearby cars, and screaming and shouting can be heard in the background.

The witness identified himself as one of the bodies lying on the ground.

The second video clip was much more graphic and was shown after the witness had left the courtroom. In it, a man lies face-up in the middle of the street. The top of his head is completely blown open, and blood gushes out of it onto the pavement. He is surrounded by other bodies, some of which are being dragged into cars.

Prosecutors allege that 43 people were killed and 75 more were injured in the August 28, 1995 attack, which they say originated from territory held by the Bosnian Serb army, or VRS, under Mladic’s control.

This was the second of two mortar explosions at the market – the first occurred in February 1994 and killed more than 60 people.

Mladic, the commander of the VRS from 1992 to 1996, is accused of planning and overseeing the 44-month siege of Sarajevo that ravaged the city and left nearly 12,000 people dead. He is accused of a deliberately campaign of sniping at and shelling the city’s civilian population in order to “spread terror” among them.

The indictment – which lists 11 counts in total – alleges that Mladic was responsible for crimes of genocide, persecution, extermination, murder and forcible transfer which "contributed to achieving the objective of the permanent removal of Bosnian Muslims and Bosnian Croats from Bosnian Serb-claimed territory".

Mladic was arrested in Serbia in May 2011 after 16 years on the run.

During the cross-examination, Mladic’s defence lawyer Miodrag Stojanovic asked several questions about where exactly the witness was standing when the shell exploded.

The lawyer also asked the witness to comment on his statement that he did not hear the approach of the shell or the sound of the mortar being fired. Svraka confirmed this was the case, and said he only heard the detonation.

He estimated that the explosion took place five to seven metres away from him, behind his back.

The lawyer asked whether the witness thought the explosion could have been a landmine exploding.

“[It was] probably a shell. A mine has to be planted,” the witness said.

After the cross-examination, prosecutors asked Svraka to clarify what exactly he was able to see and hear before and during the explosion.

“No one can see a shell in the air. I heard it explode and it hit me; I mean it almost killed me. Maybe it would have been better had it killed me. Where it came from and who threw it, I don’t know.”

Also testifying this week was expert military analyst Richard Philipps, who said that according to combat reports, “there was a good system of reporting” up and down the chain of command in the Sarajevo Romanija Corps of the VRS.

“The staff officers were capable and trained… Orders were passed down the chain and reporting came back up chain of command,” Philipps said.

During Philipps’s testimony, Mladic was told off by the bench for speaking aloud, since he is only allowed to communicate with his lawyers via written notes.

A few minutes later, however, Judge Orie lent Mladic his own magnifying glass so he could examine some documents more closely.

“I’d like it back, since you borrowed it from me,” the judge said.

Mladic raised the magnifying glass, smiled, and said, “thank you” in English. The judge smiled back at him.