Former army subordinates say they were never told to fire on civilians, and did not mount offensive operations.

Former army subordinates say they were never told to fire on civilians, and did not mount offensive operations. 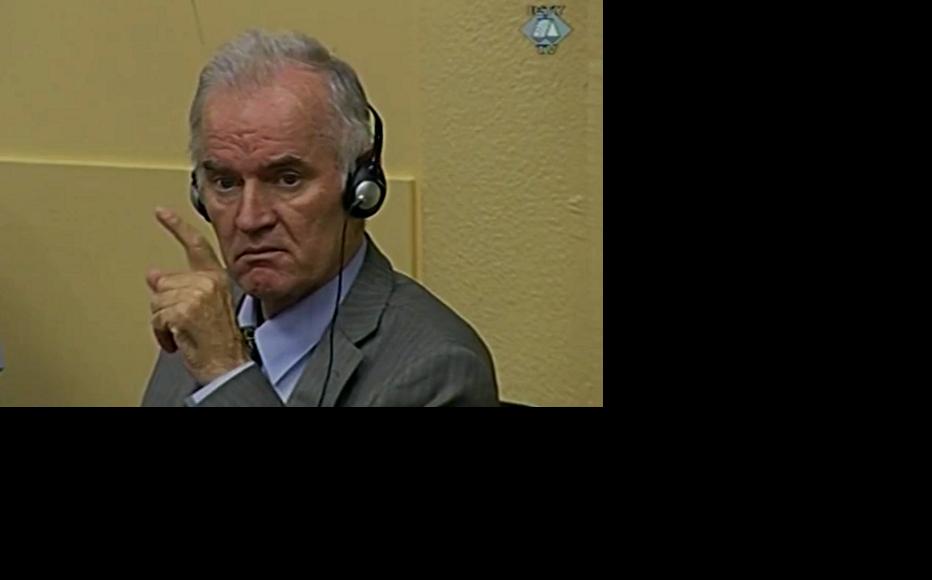 Ratko Mladic in court this week as his defence case got under way. (Source: ICTY)
The link has been copied

The defence case of wartime Bosnian Serb army commander Ratko Mladic opened this week with two of his subordinates testifying that they never received orders to target civilians in Sarajevo.

The first witness to appear, Mile Sladoje, was an officer in the Ilidza Brigade of the Bosnian Serb army, of which Mladic was overall commander. Sladoje served as an assistant battalion commander responsible for morale from June 1992 to March 1993, and then battalion commander from March to October 1993.

“If there was fire, and we couldn’t always see who was shooting from where, we received and gave out orders, [but] we never issued or received orders to target civilians. But civilians did suffer in exchanges of fire,” Sladoje told defence lawyers.

Mladic is charged with planning and overseeing a 44-month siege that ravaged the Bosnian capital and left nearly 12,000 people dead. His army is accused of deliberately sniping at and shelling the city’s civilian population in order to “spread terror” among them.

The indictment – which lists 11 counts in total – alleges that Mladic was responsible for crimes of genocide, persecution, extermination, murder and forcible transfer which "contributed to achieving the objective of the permanent removal of Bosnian Muslims and Bosnian Croats from Bosnian Serb-claimed territory".

The trial began in May 2012, and the prosecution rested its case in February this year. Mladic’s defence team declined to give an opening statement when their case opened on May 19, and after some procedural matters, they immediately called their first witness to the stand.

According to a summary of his evidence read aloud in court, Sladoje “only opened [fire] in response to enemy fire, and only in response to observed targets. He didn’t see General Mladic and received no direct orders from him.”

During a brief cross-examination, prosecuting lawyer Dermot Groome questioned the witness on numerous apparent inconsistencies in his statement, and about military actions against Sarajevo that were allegedly a response to what was happening elsewhere in Bosnia.

While the witness was on the stand, Mladic was once again reprimanded by the presiding judge for speaking loudly to his lawyers.

“We will be very strict in this respect,” Judge Alphons Orie said. He also warned Mladic that the bench would not tolerate him greeting or saluting witnesses as they entered and left the courtroom.

“They appear here as witnesses, not as acquaintances of the accused, not [as those] loyal to the accused. It should be void of any personal element. That’s how we expect witnesses to behave and how Mr. Mladic should behave,” Judge Orie said.

The second witness to take the stand was Predrag Topara, commander of the fifth company of the Second Infantry Battalion in the First Sarajevo Mechanised Brigade.

According to a summary of his evidence read aloud in court, Topara and his unit “carried out exclusively defensive actions… During the whole war, his company never carried out any offensives against Muslim positions for the purpose of capturing territory. During the entire war, the lines stayed exactly the way they were set at the beginning of the conflict.”

The summary said that Topara and his unit had “information that the Muslim side misused civilian buildings for military purposes. Namely, they were firing from there at Serb positions or placed their staffs and commands there.”

During questioning, Mladic’s lawyer Branko Lukic asked about the accusation that the Bosnian Serb side blocked humanitarian aid from entering the city.

He produced an order from the then Bosnian Serb president Radovan Karadzic to “enable the undisturbed delivery of humanitarian aid to areas held by the other side”.

“Was that the policy of the civilian and military authorities? What kind of orders did you receive – to let convoys pass or not?” Lukic asked.

“We received orders to let convoys through, and that we did,” Topara said.

Judge Christoph Flugge interjected to note that the document also stated that the army must “stop immediately with all military offensive activities”. He asked what this was in reference to.

“Maybe this pertains to another area [in the] theatre of war. The main staff is mentioned. Where I was, on my defence line, there was a kind of truce. Maybe this passage pertains to a broader area of our military zone,” the witness said.

The witness said he never saw this specific order during the war, but “acted upon the order to let the convoys through”.

“The orders you received from your superior command – were they consistent with the decision from President Karadzic?” Lukic asked.

“I think so,” Topara replied.

During the cross-examination, prosecuting lawyer Milbert Shin produced a document dated March 14, 1995. It was written by the United Nations Special Representative for the former Yugoslavia, Yasushi Akashi, and sent to a fellow UN official Kofi Annan, who would later become Secretary-General.

“On the subject of freedom of movement, the delivery of human assistance, Mladic was obstructive; he insisted on absolute parity on what was delivered to Bosnian Serbs and the [Bosnian Muslim] enclaves,” said Shin, reading from the letter.

The lawyer noted that when Topara was giving testimony in the Karadzic trial, the witness was asked by the prosecution “whether on basis of this, there was a policy to obstruct aid at the highest level”, to which he replied that he did not know anything about it at the time. He stood by that previous answer this week.

Prosecutor Shin turned to a section of the witness statement where Topara states that “civilians were frightened by frequent shelling by the Muslim side”.

“They were more frightened by heavier shelling than by light shelling, correct?” Shin asked.

“You would agree that Muslim civilians would likewise be frightened by shelling?” the lawyer asked. The witness responded in the affirmative.

“Would you agree that shelling was heavier from the Serb side than the [Bosnian government] side?” Shin asked.

“At the beginning [of the war], at the line where I was, yes; but then from the middle to the end, it was more or less even. They armed themselves more and more each day, so we were equally matched,” Topara said.