Some surprises in electoral results for country struggling with conflict and economic woes.

Some surprises in electoral results for country struggling with conflict and economic woes. 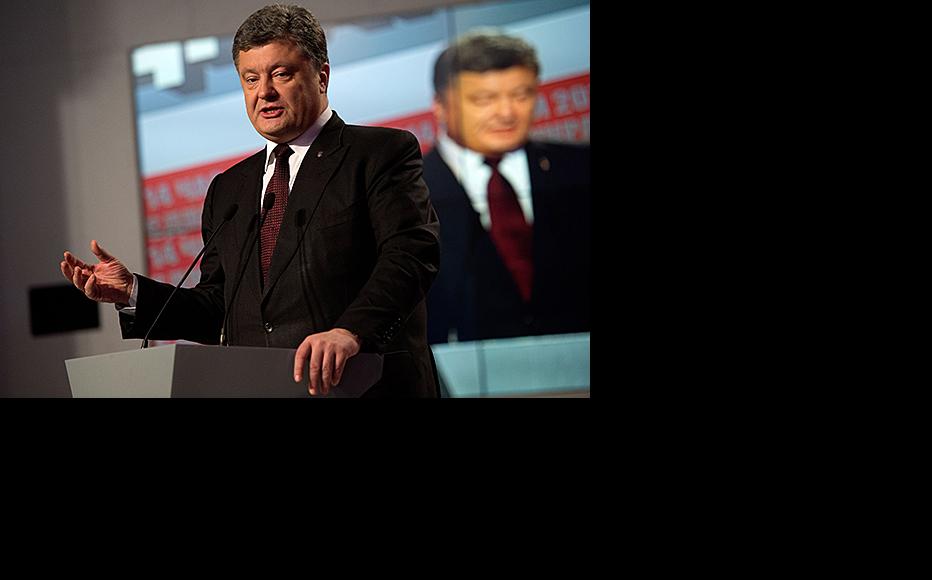 Ukrainian president Petro Poroshenko is set to form a coalition government after a parliamentary election led to a clear victory for pro-Western parties, but not for one in particular.

Although the president’s party was hoping to win a clear majority on October 26, it was narrowly beaten by the People’s Front, the party of incumbent prime minister Arseny Yatsenyuk which was just ahead with 22.2 per cent against the Petro Poroshenko Bloc’s 21.8 per cent, with 99.9 per cent of the vote counted.

Poroshenko said the electorate had chosen “a democratic, reformist, pro-Ukrainian and pro-European majority” that backed a resolution of the crisis in the east of the country.

“The majority of voters were in favour of the political forces that support the president’s peace plan and seek a political solution to the situation in the Donbas,” Poroshenko said.

In reality, the People’s Front has taken a harder line on the conflict, with statements that appear to favour a military solution over concessions that might consolidate the rebels’ hold on parts of the east.

The future coalition looks likely to be composed of the Petro Poroshenko Bloc, the People's Front and Samopomich (Self-Reliance) led by Lviv mayor Andriy Sadovy. The fourth-placed party, Batkivschyna, headed by former prime minister Yulia Tymoshenko, may also be included.

Of the dozens of parties that registered for the election, just six passed the five per cent electoral threshold.

“This election surpassed my expectations,” said Otar Dovzhenko, 33, a media expert from Lviv in western Ukraine. “I am so happy that Samopomich got such a good result, not because it is from Lviv but because I really support it.”

Polling stations did not open in Crimea or in eastern areas controlled by separatists. Turnout was generally low in the south and east, with only 32 per cent of people voting in the parts of the Donbas region now held by Ukrainian forces.

“Look at the turnout from Odessa to Kharkiv; it was just a boycott by citizens who harbour anti-Ukrainian feelings,” Dmitro Litvin, an editor at the Inter TV channel, wrote in his blog.

Sergey, 36, a sales manager from Donetsk, told IWPR that even if had been able to vote, there was no one he felt he could trust.

“Maybe there are some new people in the new parties, but I don’t know them and they have no chance of getting into power,” he said, adding that he had no plans to vote in the elections the rebels were holding in areas including Donetsk city on November 1.

The pro-Western trend was least marked in eastern regions. In Mariupol, a city on the front line, the Petro Poroshenko Bloc won only 15 per cent and in Slavyansk, which recently came back under Ukrainian control, it won 19 per cent.

In the southeast, the Opposition Bloc, formed by members of former president Viktor Yanukovich’s Party of the Regions, did particularly well. Although it won only 9.8 per cent of the vote nationwide, giving it 30 seats in parliament, it scored 52 and 28 per cent in Mariupol and Slavyansk, respectively.

Igor Kolyushko, head of the board of the Centre for Political and Legal Reforms, said that the next parliament would include many people who had never held office before, but warned that members of this fresh influx would have their work cut out.

“I see a lot of new faces, but they are scattered among different parties,” Kolyushko said. “I am afraid that their new ideas will be dramatically restricted by their party leaderships.”

Given the success of the Opposition Bloc and the many independent candidates from the old guard, the new parliament does not signify a complete break with the politics of the past.

A People’s Front candidate, Viktoria Syumar, calculated that parliament would include 62 politicians who voted for anti-protest legislation in January which resulted in the death of more than 100 protestors.

Kolyushko believes that some voters preferred to see familiar faces and were prepared to overlook politician’s past their previous support for repressive measures.

“For these people, closer relations with Russia and broader use of the Russian language, which former Party of Regions members are trying to cash in on, are much more important than any political blunders,” he said.

Ilya Bey, 30, a translator from Zaporizhya in eastern Ukraine agreed, adding that “some people vote for famous names anyway because they think it’s too boring to read a candidate's manifesto”.

Bey noted that Vyacheslav Boguslayev, a former Party of Regions lawmaker and CEO of a major engineering company, was elected as an independent in the city.

“People voted for him just because he’s a well-known figure,” he said. “Everybody could read his name printed in large letters on city trams during the election campaign. People thought, ‘Oh, he bought these trams for us. We should vote for him.’”

Under the Ukrainian political system, proportional representation determines half of parliament’s 450 seats. The pro-Western parties have done well in that part of the election, but a different pattern emerged in the “single-mandate constituencies”, where independents are elected on a first-past-basis and only later join factions.

“We have a more pro-European parliament now,” political scientist Olexy Haran told IWPR, “but too many veteran politicians with tarnished images have got places due to the [first-past-the-post] electoral system”.

“It’s a shame that so many people in Kiev still support the ‘regionals’,” said Iryna, 26, a Kiev psychologist.

The new parliament will have few representatives of the far right, and those who make it into parliament will come via the first-past-the-post system. Andry Biletsky, a leader in the far-right Patriots of Ukraine and the Social-Nationalist Assembly, won a directly-elected seat in a Kiev district. In Dnepropetrovsk, Dmytro Yarosh, leader of the Right Sector party – which scored only 1.9 per cent overall – won a seat.

“Right Sector has never been a trustworthy political party and it hasn’t become one,” Kolyushko explained, “Those who voted for it are people who would like to see some protest, but not real politics.”

As well as standing in first-past-the-post ballots, volunteer militia leaders were also awarded positions high on the lists drawn up by parties in the proportional system.

Semen Semenchenko, founder of the Donbas Battalion, was a leading candidate for Samopomich, a party that otherwise courted the middle class and business community.

Former fighters will now have to swap their military fatigues for business suits.

“I don’t see anything bad in combatants becoming members of parliament,” Haran told IWPR. “These people are very energetic. It is very difficult for Westerners to understand the situation in which we find ourselves.

“At such a crucial time, fighters have played a very important role. Life will show whether they make good politicians.”

Oleg Shynkarenko is a Kiev-based journalist.