Fears that prohibitions will lead women to seek illegal procedures that could be extremely dangerous.

Fears that prohibitions will lead women to seek illegal procedures that could be extremely dangerous. 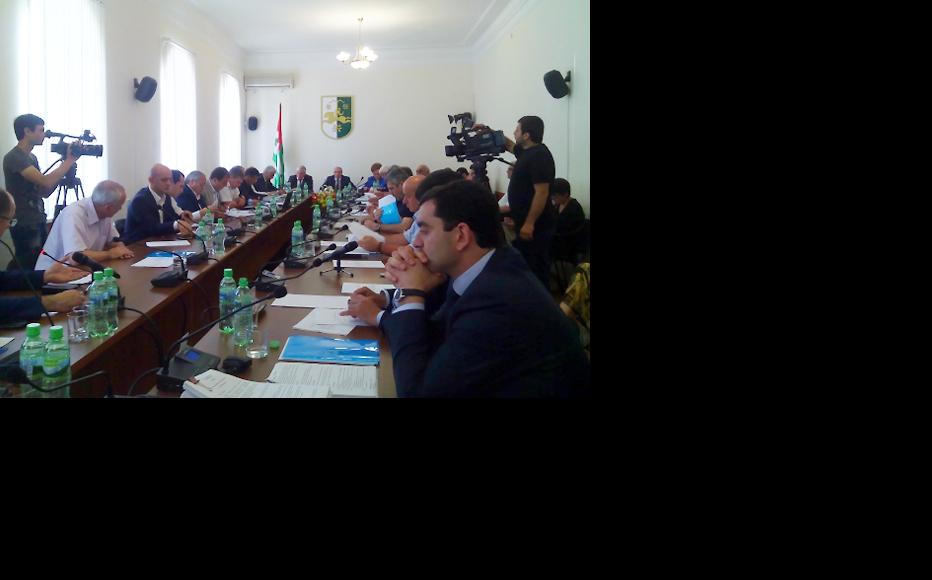 Lawmakers attend a meeting of parliament. (Photo: Anaid Gogoryan)
The link has been copied

Healthcare officials have urged the authorities in Abkhazia to revise a new law banning abortion, arguing that it will lead to public health problems and do nothing to increase the birth rate.

On February 9, Abkhaz president Raul Khajimba signed a law on healthcare that has the stated aim of ensuring that citizens had access to medical treatment. One of its articles also prohibits abortion and “establishes liability for the artificial interruption of a pregnancy in accordance with the criminal law”.

Although Abkhazia´s ministry of health suggested that the new legislation include a list of conditions under which abortions could be performed on medical grounds, their proposal was ignored. The only circumstance under which abortion will now be permitted is “in cases of antenatal fetal death”.

Most people in Abkhazia follow Orthodox Christianity and the authors and supporters of the law argued that as well as the ethical aspect of preserving life from the moment of conception, the new ruling would also boost the number of births in Abkhazia.

The territory broke free of Georgian control in the early 1990s and declared independence.  Russia recognized Abkhazia in 2008, but Georgia still claims sovereignty.

“If we save several dozen lives, that is already a credit to the law, I think, this will be the result,” Gurgulia said.  “In parallel, government agencies need to think about materially encouraging large families.”

Said Kharazia, a member of parliament and one of the authors of the law, praised the ruling on abortion in a post on his Facebook page as “the most important, the most humanitarian, most moral part of the law on health protection because in this instance, the state law has become the defender of defenceless children.

“This law supports life itself, protects the most valuable thing we possess – our children!” he wrote.

The new law was approved by parliament on January 29.  Only two of the body’s 35 lawmakers, Emma Gamisonia and Akhra Bjania, voted against it, while two others abstained.

“I believe that the law will not yield the result which they expect,” said Gamisonia, who is the only woman in parliament and one of its vice-speakers. “The law should not have been approached so categorically.  I hope that different acts will be adopted as part of the law … so that the rights of women and any citizen of the country in general will not be infringed.”

Abkhazia´s deputy minister of health, Batal Katsia, said that the law was both illogical and impractical.

“There are indications for abortions, they are social, medical and social and purely medical,” he explained. “In all countries where abortion is banned for social reasons, there is a list of abortions for medical reasons.  A lack of this defies common sense.”

Katsia also warned that his own department’s objections had been ignored by the initiators of the law.

“When we realized that we could find no support in the parliamentary committee, we not only sent the ministry of health´s official position, but also an appeal by the obstetricians and gynaecologists of the Republic of Abkhazia, to the speaker and the president,” he continued. “Unfortunately, the letter and our appeal were not read out at the time of the adoption of the law.  We hope later these changes will be introduced and that the law can somehow be completed.”

Gurgulia said that the law was the product of three years of work and that he had only received the ministry of health´s letter with its proposed amendments 10 minutes before the session that debated the bill began.

“They [the ministry of health] had a great opportunity to develop their vision on the entire law, not only regarding abortions.   We considered all the proposals to the bill … at three meetings of the working committee on the bill with the participation of representatives of the ministry of health,” said Gurgulia.

According to him, there was nothing unusual about the legislation.

“Many countries have adopted such a law, when their demographic situation was threatened,” Gurgulia continued. “There is nothing wrong if we adopt it at this stage.  We are a small nation which suffered a brutal war.  Poor families have more children than well-to-do families.  In our society, there is spiritual degradation.  The state now needs human resources, and we allow abortions.  Who wants it, should travel outside Abkhazia.  In our state, it is taboo.”

Abkhazia has a population of 240,705, according to the 2011 census. According to Katsia, on average 2,500 children were born in Abkhazia every year.

“We know well that, unofficially, there are three times more abortions,” Gurgulia said. “Out of these, only five per cent are for medical reasons.  Doctors should engage in prevention.”

However, Katsia said that doctors would now be forced, even in routine cases, to send women outside Abkhazia for abortions. Many already go to neighbouring Russia for the procedure.

“The law established a categorical ban on abortions,” Katsia said. “If the woman is in danger, for example, she has cancer in the early stages of pregnancy, treatment is necessary, during which an abortion has to be carried out otherwise, both the fetus and the mother will die.  It turns out that on the basis of this law, we have no right to do so.  We want to convey this elementary logic.

“We hope that this is a misunderstanding that can subsequently be fixed.  We have to make amendments to the law because it cannot be otherwise,” Katsia concluded.

Fatima Kharzalia, an obstetrician who works in a private clinic in the capital Sukhum, stopped performing abortions a long time ago due to her personal beliefs.  However, she also said that this law had not been thought through properly.

Apart from not solving any demographic concerns, it would also create many problems that the state would struggle to cope with.

Illegal abortions could result in permanent injury and even death for the women involved, she said. Then there was the issue of abandoned babies and unplanned children.

“I believe the law is rash,” Kharzalia said.  “Even the most radical Islamic state is more flexible on this question.  It is necessary to consult and decide this matter with the professionals.”

According to her, no woman would ever end her pregnancy solely on the basis of convenience.

“A woman who does not want to have a baby, who has come to such a tough decision to end her pregnancy, will not be stopped by a law.  This law stops doctors from terminating a pregnancy.  And we will have an epidemic of health problems,“ Kharzalia said.

Contraceptive use was not very common in Abkhazia, she added, in part because of its expense.

Natella Akaba is secretary of the Public Chamber of Abkhazia, an advisory group to the president.

She noted with regret that National Assembly deputies had not thought it necessary to carry out any public opinion surveys ahead of forming the legislation.

The law banning abortion was adopted in spite of the many criticisms expressed by medical professionals, community leaders and NGO activists.

“If the members of parliament held consultations with a number of social organisations, perhaps they would find much more effective ways to increase the birth rate than by banning abortion,” Akaba said.

“And these methods are well known and time-tested – support for young families, state care for the expectant mother, guaranteed free childbirth [costs], payment of maternal benefits at the birth of the second and each subsequent child.”

Currently, the state provides a grant of 13,500  rubles upon the birth of the first and second child, a figure that is due to be increased to 50,000. If there are three to five children in the family, each is eligible for a monthly allowance of 500 rubles. In families of seven to nine children, each receives 750 rubles and for nine and above the state provides 1,000 rubles per child.

Valeriy Bganba, the speaker of parliament, told reporters on February 10 that parliament would also work towards more social protection and financial benefits for larger families. One measure under consideration by the appropriate parliamentary committee was awarding a grant of 100,000 rubles to be paid on the birth of the third child, he said.

Katsia made clear that such supportive measures were the only way government could influence the size of citizen’s families. He added that, according to research carried out by the ministry of health, women would be happy to have more children if they were sure they would provided for.

“This is the only way to stimulate the birth rate,” Katsia said. “Prohibitive measures never decide a socially significant issue positively.”

Anaid Gogoryan is a IWPR trained journalist in Abkhazia.

Abkhazia
Women
Connect with us