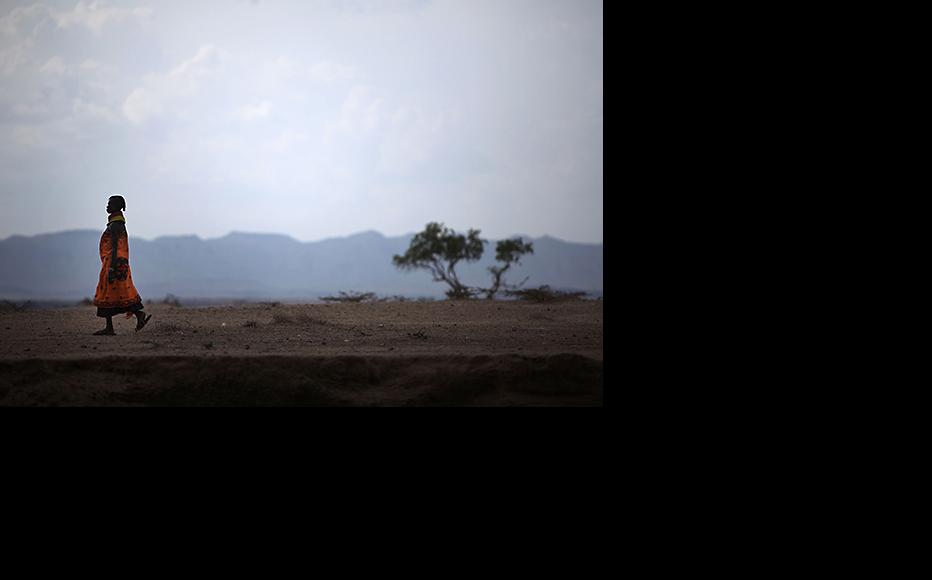 A Turkana woman in northern Kenya. Picture from November 2009. (Photo: Christopher Furlong/Getty Images)
The link has been copied

The authorities in Kenya have welcomed a new effort to end continual clashes between the nomadic pastoralist Pokot and Turkana peoples, which often involve violent cattle raids and confrontations over water or grazing rights.

Local elders in the northwest of the country are mediating between the two warring ethnic groups.

While the initiative has had some success in smaller-scale disputes, some argue that it will have little impact on overall levels of violence unless the government expands it and backs it up with more robust security tactics.

Successive governments in Kenya have struggled to control ethnic warfare between pastoralist groups in the north, and the fighting has intensified in recent months following the discovery of oil reserves in Turkana County. This vast, arid region has little government infrastructure and an inadequate police presence, leaving villages exposed to attack.

Solomon Yabel, who lives in Nakwomoru in an area known as Turkana South, described one such raid on his village in February this year.

“I saw more than 100 attackers descending on our manyattas [houses] from all directions,” he told IWPR. “They were shooting randomly as others chased away cattle during the attack.”

Yebel said he saw a woman and her child shot dead in the attack.

When villagers tried to retaliate, they were overpowered. The assailants got away with more than 1,200 head of cattle.

“It was a chaotic situation because we didn't expect the attack,” Yebel said. “After about three hours, we went back to the manyattas and found the bodies of three men, three women and two children.”

Government attempts to tackle the problem have focused on disarmament – either voluntary or forcible – and on taking offenders to court, but they have failed to deter further attacks.

The new scheme set up by local elders, designed to tackle smaller-scale raids, has made some headway. Senior members of the Pokot and Turkana communities come together to mediate between the perpetrators of attacks and their victims.

The culprits are forced to confront their victims, compensate them for killings, and give back stolen livestock.

Tribal leaders also decide how to punish offenders and set the level of compensation they must pay. In addition, civic awareness programmes are being conducted within the two communities, the aim being to encourage lasting peace.

At the moment, the scheme has been rolled out in Turkana and West Pokot, and in the neighbouring Baringo, Samburu and Elgeyo-Marakwet counties.

While there are no formal laws governing the new procedure or giving elders powers to deal with disputes, Kenya’s legal system does make provision for out-of-court settlements of this kind.

There are no figures for how many cases have been resolved since the scheme began last year, but elders who spoke to IWPR said it could be as many as 100.

Earlier this year, Ekoi Lokwam was part of a band of Pokots caught stealing cattle from a neighbouring Turkana group. One person was killed and several head of cattle were stolen in the attack.

Lokwam was summoned to appear before a committee of Pokot and Turkana elders, and was forced to pay five head of cattle to the family of the man who was killed, and to ensure that the stolen animals were returned.

In another case, Jamin Ekwam was among a group brought before a similar tribunal.

“I was fined to pay three head of cattle to a family whose son was injured when we raided their village, and after I did that they forgave me. Now they are my friends,” Ekwam told IWPR.

Tribal leaders proposed the initiative to the Kenyan government last year, arguing that a community-based solution rather than conventional security and justice mechanisms was more likely to help prevent attacks.

The chairman of the Pokot Council of Elders, John Muok, and his Turkana counterpart, Benjamin Ebenyo, both told IWPR that they had agreed to work with the government and with other local groups.

“We needed such a local system, because over the years it has been difficult to implement other strategies aimed at dealing with cattle rustling,” Muok said. “Both the government and non-governmental organisations have tried disarmament or introducing alternative means of livelihood for our people, but all that has not worked.”

Muok believes that such strategies were flawed because they did not directly engage communities in an area with high rates of illiteracy and poverty, in which it is difficult to enforce processes that people do not understand.

“Once the communities own the process, then it’s easy to implement, and this mechanism is succeeding because we have so far handled more than 100 cases on both the Pokot and Turkana side with positive results,” Ebenyo said.

He said young people were the worst offenders and the mechanism targeted them specifically.

As well as conflict resolution, the scheme points young people towards vocational training so that they can set up their own businesses or farms.

“By rehabilitating the youth and retraining them in entrepreneurship, we effectively cut them off from cattle rustling and thus end the practice,” Ebenyo said.

Local authorities agree that the secret to the scheme’s success lies in its grassroots approach.

“This is a system that has been working very well since it started. and the advantage is that it involves the communities themselves who punish their own and ensure any losses are compensated,” Pater Okwanyo, West Pokot’s county commissioner, told IWPR.

In the case involving Ekwam, elders linked him up with opportunities for training and professional advancement. Today he runs a grain business at the Kainuk market near the boundary between West Pokot and Turkana counties.

Ekwam says the locally-led mechanism is working better than previous schemes imposed by central government or by other outside groups.

“It was [easier] for me to listen to the elders who we highly respect in our communities, than the police or government officers who apply orders and force that cannot work in most situations,” Ekwam said.

“Communities have used the local mechanisms effectively in many cases, and we have suggested to the government to even facilitate the elders so that they can easily move to all areas within their jurisdictions to handle the arising cases and [inform] communities,” James Lomenen, the legislator for Turkana South constituency, told IWPR. “It’s time to embrace homegrown solutions or mechanisms which work better.”

MEDIATION ALONE NOT A SOLUTION

However, not everyone thinks the mediation process offers an instant solution to inter-communal violence in this part of Kenya. Such is the scale of the unrest that human rights advocates like Ken Wafula believe that the scheme will have little impact if it progresses at its current pace.

“Yes, the elders are effective, but the initiative is quite slow,” said Wafula, executive director of the Centre for Human Rights and Democracy based in the town of Eldoret. “Our suggestion is that the government should work with them to quicken effective measures to end the primitive culture of cattle rustling.”

While tensions over access to water and grazing have always existed among pastoralist groups, the proliferation of firearms has made confrontations more deadly. (For a report on efforts to deal with this issue, see Kenyan Disarmament Off-Target http://iwpr.net/report-news/kenyan-disarmament-target .)

Wafula wants the government to increase policing levels and to launch effective disarmament programmes, in parallel with helping elders mediate between the communities on a broader scale than now.

“The elders should be used by the government in a more effective manner, like to carry out inter-community dialogue sessions where they can also negotiate on peace,” Wafula said.

Other experts on the ground are similarly sceptical. Mable Trey, who heads a development organisation in West Pokot, argues that elders cannot directly prevent cattle raids, particularly at the larger end of the scale.

“The gangs attack using maximum force,” she said. “They kill even elders in the attacks, and hence the approach to use elders as a local mechanism to deal with cattle rustling will not work in the short term.”

However, she conceded that over time, the initiative might help wean people off raiding. Like Wafula, she would like to see the government fight the raids with force, while simultaneously testing the new mediation initiative.

“Perhaps the best use of the elders’ system is to enable government to communicate with the communities,” she said. “The approach by elders requires time to see if it will work.”

Mathews Ndanyi is a reporter for ReportingKenya.net and The Star newspaper in Eldoret.

This article was produced as part of a media development programme by IWPR and Wayamo Communication Foundation in partnership with The Star.