How a standoff between armed gunmen and the authorities turned into a symbol of popular discontent.

How a standoff between armed gunmen and the authorities turned into a symbol of popular discontent. 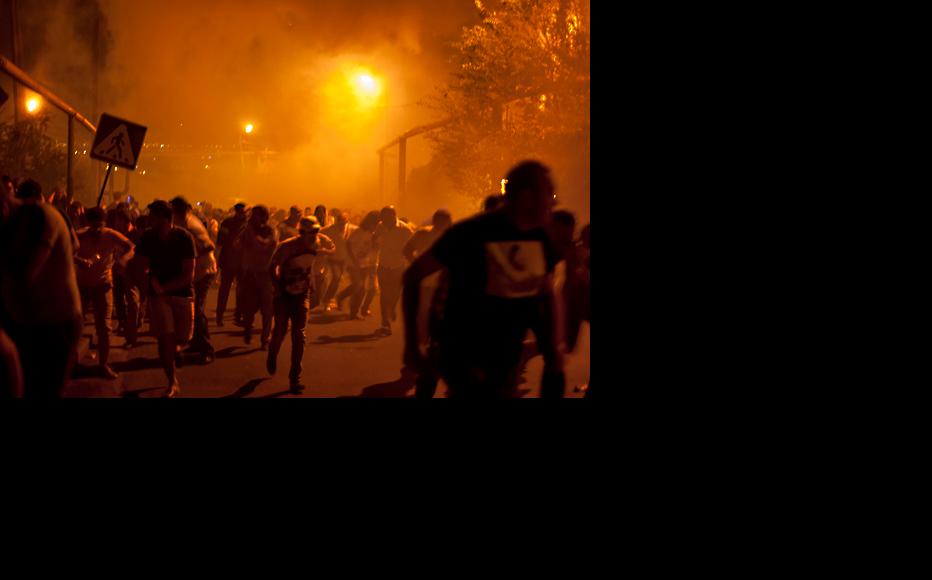 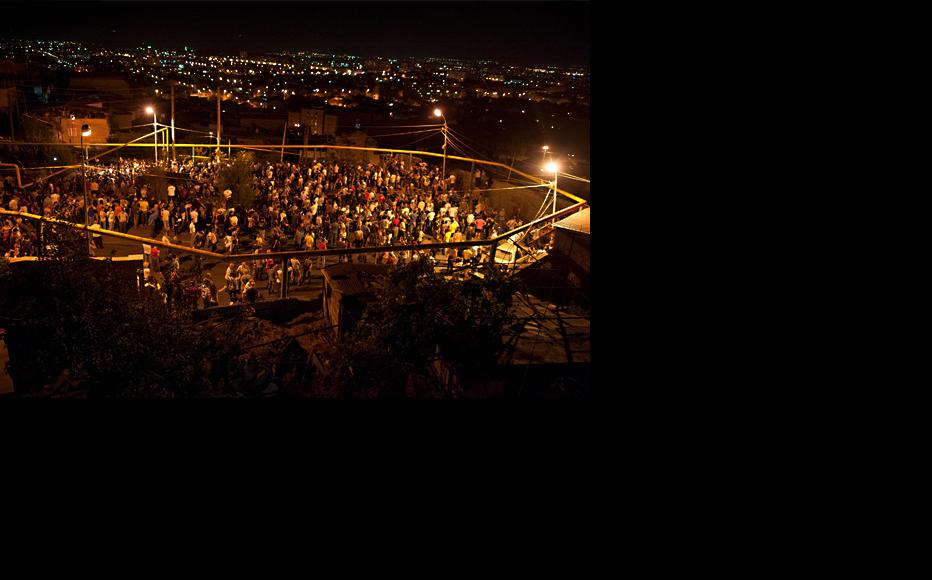 The biggest clash between the activists and the police took place on July 29. (Photo: Nazik Armenakyan) 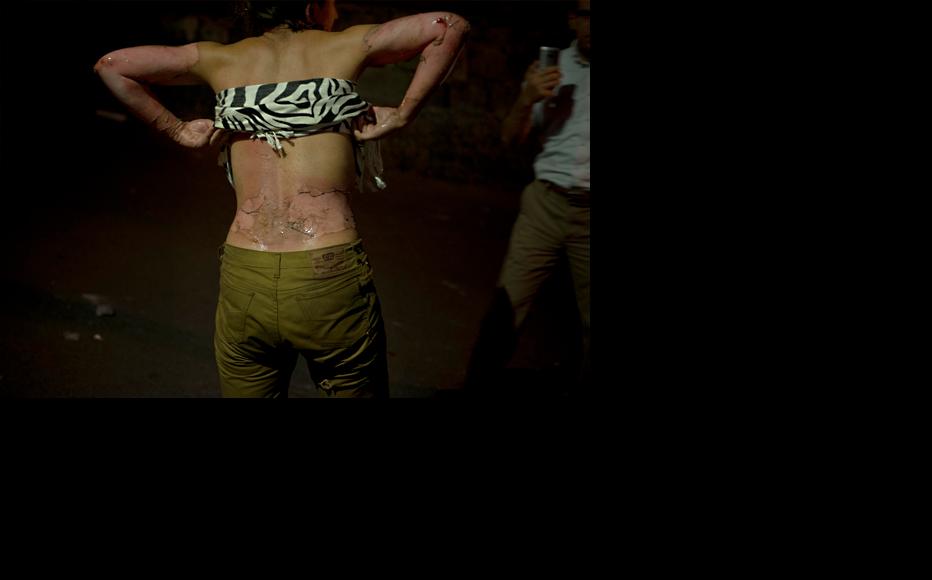 Several dozens were injured and beaten, including many journalists and cameramen. (Photo: Nazik Armenakyan)
The link has been copied

Experts have warned that the public demonstrations in support of gunmen who initiated a two-week hostage crisis in a Yerevan police station must serve as a wake-up call to the Armenian government.

The armed group, called Sasna Tsrer or Daredevils of Sassoun - the name of an Armenian epic poem - was coordinated by several veterans of the Nagorny Karabakh war of the early 1990s.

Consisting initially of 31 people, the group had demanded the release of opposition figure and fellow Karabakh veteran Zhirayr Sefilian, who was arrested in mid-June for the illegal acquisition and possession of weapons.

Sefilian heads the opposition movement Founding Parliament, which was set up in 2008 and has previously organised dozens of peaceful rallies to promote regime change.

Sasna Tsrer, who also demanded the resignation of President Serzh Sargsyan, described their actions as “the beginning of an armed coup” aimed at “eradicating corruption and restoring justice”.

The standoff finally came to an end on July 31 when the 20 remaining gunmen were convinced to lay down their arms and surrender.

By the end of the siege, two policemen had been killed and several members of the armed group injured.

Sasna Tsrer´s actions and demands seemed to strike a chord with a swathe of the population dissatisfied with the government.

During the first days of what has become to be called the July Crisis, several dozen people began gathering near the safety cordon set up around the police station.

Within a few days, well over 1,000 people had turned out to support the gunmen, leading to clashes with the police that resulted in injuries and hundreds of arrests.

Protests in the capital continued even after the end of the siege, although they have been moved to Liberty Square in central Yerevan.

“A full analysis of these events will take a long time,” Sargsyan said on August 1, a day after the surrender, adding that the priority was that “the very existence of the disastrous tendency to solve problems through violence must be eradicated.”

Sargsyan, who also raised the possibility of the formation of a government of national consensus, continued, “Anyone can dislike the authorities, or the government, or the president, [and] can be categorically against our policies.

“However, dislike cannot be a reason for glorifying those who attempt to solve problems with arms.  Authorities come and go.  Encouragement of terrorism will remain as a cancer and will spread.  It will ruin everything our nation has created.”

Stepan Danielyan, head of the Cooperation for Democracy Centre in Yerevan, said that popular sympathy for the armed group could be attributed to the lack of political mechanisms to influence those in power.

“In this connection, the actions of the armed group are not a simple criminal act, but the result of political processes going on in the country,” Danielyan told IWPR.  “There is such a desperate situation in the country that ordinary people took to the streets and supported the actions of the group.  This is a political assessment of the authorities by society.  It turns out that part of society already advocates armed struggle or approves an armed struggle against the government.”

The protests also reached Gyumri, Armenia´s second largest city, where demonstrators shut down one of the main streets.

Protesters called for Sargsyan’s resignation and Sefilyan’s release as well as an end to corruption and economic monopolies.

Throughout the standoff, the ruling Republican Party of Armenia as well as the majority of the parliamentary opposition made no official comment.

Despite calls from some politicians and NGOs to hold an extraordinary session of parliament to discuss the situation in the country, no action was taken.

Sargsyan’s only public statement, five days after the crisis began, was to say that country was going through “difficult times” and the members of the armed group “should lay down their arms and surrender”.

Stepan Grigoryan, chairman of the board of the Analytical Centre on Globalization and Regional Cooperation (ACGRC), said that the political response to the crisis had been pathetic.

“The political elite, especially parliament, showed its utter helplessness during the days of the crisis and its detachment from public sentiment,” he continued. “The political system was just in a stupor, which highlights the question of a change of political generation.”

Artak Kirakosyan, chairman of the Civil Society Institute in Yerevan, agreed that the events of recent weeks should serve as a wake-up call for the government.

“These problems must be solved, and the authorities should learn a lesson from all that has happened,” he said. “This is a crisis of the entire political system and a crisis of confidence.  Most importantly, the ruling party has lost the upcoming parliamentary elections.”

Parliamentary elections will next be held in spring 2017. In early 2018, under the new constitution passed last December, the country will switch from a semi-presidential to a parliamentary form of government.

“THE STORY IS NOT OVER”

A week after the police station takeover began, after all the hostages were released as a result of negotiations, the police changed tactics and began to use snipers to shoot at the gunmen’s lower limbs.

Eight members of the armed group were injured and subsequently hospitalized, while several others were arrested during the transfer of the wounded.

In the latter days of the siege, police also began to apply force against pro-Sasna Tsrer demonstrators and arrest some political activists and opposition politicians.

According to Human Rights Watch, Armenian police used excessive force against peaceful protesters on July 29, when they beat dozens of demonstrators and journalists and used stun grenades to forcefully disperse them.

Some people claimed that among those doing the beating were police officers in civilian clothes.  One teenager had one of his eyes knocked out.

Sargsyan apologized to the media in his speech on August 1 for these events, describing them as “our greatest blunder”.

According to a National Security Service report on August 1, 47 people were arrested or detained in connection with the seizure of the police station. Twenty-four of them face criminal charges for hostage-taking.

Many activists remain in jail and have been charged with organizing mass disturbances, which they reject.

Grigoryan stressed that the authorities needed to strenuously pursue reforms so as to avoid further political excesses.

“The story is not over,” he said. “If the authorities delay their reaction, there may well be undesirable scenarios for a forceful change of the political leadership.  If it is more responsive, then we will have a chance for a change of the power paradigm without so much stress - through elections. So everything depends on the authorities.”

Armenia
Crisis
Connect with us