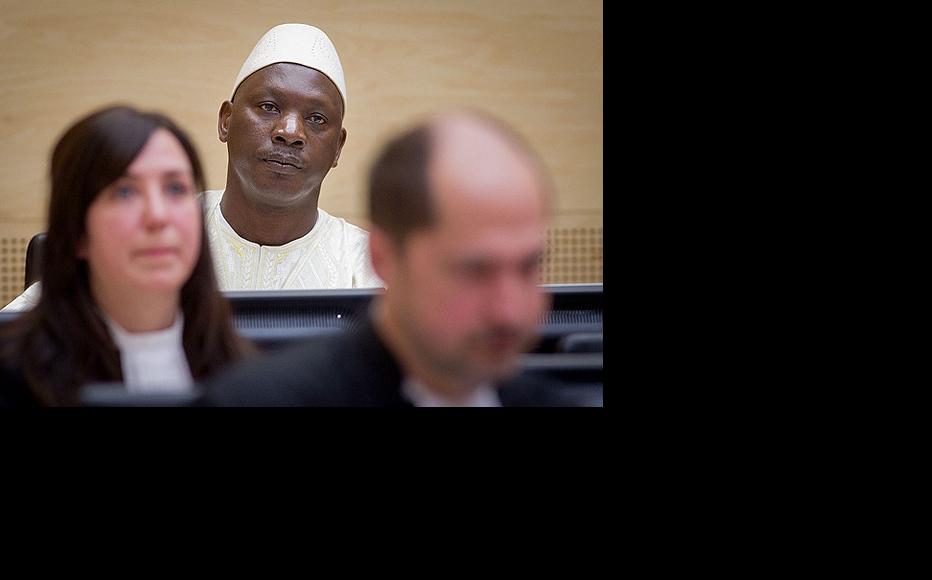 Thomas Lubanga in the ICC courtroom. (Photo: ICC)
The link has been copied

For the former child soldiers whom Thomas Lubanga Dyilo forced to join his militia group, the Congolese commander’s conviction last month by the International Criminal Court, ICC, offered hope that they might eventually receive compensation for the injustices that they suffered.

As the discussion on the best way to deliver reparations takes shape, many experts are calling for a broad-based approach that benefits communities that suffered during the brutal conflict in the Ituri region in eastern Democratic Republic of Congo, DRC. They argue that a broad-based, even-handed approach would be much more effective in healing the scars left by conflict and human rights abuses.

The ICC convicted Lubanga on March 14 of conscripting, enlisting and using child soldiers under the age of 15 to participate in hostilities in eastern DRC.

The ICC is the first court of its kind with powers to order payment reparations to those who suffered as a result of criminal actions committed by individuals whom it convicts. It can order the convicted person to pay reparations, or it can mandate payments through its Trust Fund for Victims, TFV.

Because this is new territory, the court will now have to consider what form reparations should take in the Lubanga case. In the strictest interpretation, that could mean those forcibly enlisted as child soldiers in his Union of Congolese Patriots, UPC.

However, experts on international law interviewed by IWPR say the ICC’s reparations process should be much broader in scope, and aim to benefit other individuals and whole communities which suffered during years of conflict. They argue that such a broad-based, even-handed approach would be much more effective in healing the scars left by conflict and extensive human rights abuses.

No one disputes the need to invest more in building secure lives for former child soldiers in eastern DRC.

Emile Dhehana, coordinator of PRADE, a local organisation that works towards the reintegration of child soldiers in eastern DRC, says not enough has been done to help integrate former child soldiers into society.

“School reintegration, for those still young enough to return to school, was only half-done. Organisations paid for a year of school and then nothing further,” she said. “Economic reintegration was also not well done. Organisations would give a goat to a former child soldier, who then sold the goat and ended up with nothing. Or 20 young people would be taught carpentry – but how can there be work for 20 carpenters in the same village?”

One former UPC child combatant called Justin, now 18, told IWPR exactly what he needed to help him move on from the conflict – “financial capital to be able to develop my business.”

Innocent, 26, is another former UPC child soldier in a similar predicament.

“I have training in carpentry, but no equipment,” he told IWPR. “When we came home, we were a burden on our family. Being able to earn a living is very important.”

Dhehana says the priority should be to help these former child soldiers, now young adults, to build a secure financial future for themselves.

Experts on international law interviewed by IWPR say the ICC should take a broader view of the reparations process so that it benefits other categories of individuals and whole communities, rather than only those individuals deemed to be direct victims of the specific crimes set out in a verdict. That implies a wider, different definition of victims for the purposes of reparations.

That debate is now opening up because although Lubanga still has the right of appeal, his conviction provides the TFV with its first opportunity to consider these matters not just as they apply to this case but also more broadly.

The ICC’s founding treaty, the Rome Statute, is vague on the issue of reparations. It states that compensation should be paid for harm that has been done, but not who should get the money. These principles, it says, should be set out by ICC judges at a later date, following a call for submissions from interested parties.

At the end of April, the TFV is to make a submission on the issue to the ICC trial judges in the Lubanga case.

On March 14, judges invited submissions on whether the ICC should provide reparations on a collective or an individual basis. They sought guidance on who might be eligible for reparations, the form these should take, what the criteria might be, and how the levels of harm done might be assessed.

In the Lubanga trial, the victims of the crimes for which he was convicted are former child soldiers drawn from his own ethnic group, the Hema. But such a narrow definition excludes others who suffered during the conflict, including child soldiers who fought in other militia factions.

As one observer noted, “looking just at this case, you’re almost better off if you fought for Lubanga than against him”.

The prosecution, however, argues that all victims of attacks carried out by the UPC, in particular members of ethnic Lendu communities which it targeted, should count as victims eligible for reparations.

“Reparations are crucial for justice,” said Ruben Carranza, director of the ICTJ’s reparations programme. “Not only for the material benefit that they give, but also because they provide recognition of the injustices that have occurred. Assistance that is given purely for humanitarian reasons can sometimes lead to denials of the crimes that took place.”

For Carranza, reparations must serve as an acknowledgement and a record of the injustices that occurred. It is important for victims and governments to understand that payments are a form of compensation for what happened to them, and not just another form of humanitarian assistance.

Guidelines which the United Nations issued on reparations in 2005 stressed the need for all victims of human rights abuses to be entitled to some form of redress. Carranza warns that this principle will be ignored if reparations are restricted to Lubanga’s former child soldiers.

“The definition of victims in the Lubanga case is very narrow, and there is obviously a danger that you exclude those who are just as entitled to reparations but are not part of the criminal case,” he said. “This is the problem of anchoring reparations to a criminal case, when the right to reparations is based on victimisation [as defined by the UN] and not individual criminal responsibility.”

One possibility could be to put pressure on national governments such as the DRC, to compel them to set up a reparations programme. Government-backed reparation programmes in countries such as Morocco and Peru have been founded on community-based approaches, which Carranza says could provide a good model for the DRC.

In Morocco, where compensation was provided for crimes allegedly committed after independence in 1956, communities were invited to propose projects for consideration by the government. In Peru, where compensation was given for alleged abuses between 1980 and 2000, affected communities were given an amount of money, which they could choose how to spend within the parameters laid out by the government.

The TFV broadly agrees that some community-based approach to reparations is needed, to avoid the potential for tensions in the future.

“The experience of reparations programmes around the world suggests that a community-based approach to collective reparations is helpful to balance the potentially negative side effects of exclusively singling out a particular victim or group of victims for benefits,” said the TFV’s executive director, Pieter de Baan. “In the Lubanga case, you could imagine the risk of further stigmatisation of particularly vulnerable groups, such as former child soldiers or victims of sexual violence associated with the practice of recruiting child soldiers.”

De Baan says that involving communities in the design and implementation of reparation programmes can also help promote reconciliation between communities, by acknowledging the harm that has been suffered.

At the same time, he does not see individual and community approaches to reparations as mutually exclusive.

“The adoption of a community-based approach to reparations would still allow the court to order collective reparations that result in benefits at the level of individual victims,” he said.

While the details of such an approach in the context of the TFV still need to be worked out, there are examples from countries like Peru where community and individual reparations programmes have worked in parallel.

“Although the Lubanga case did not include charges for sexual and gender-based crimes, evidence of these crimes featured extensively throughout the proceedings,” Inder said. “In our view, any harm which can be reasonably assessed to be a consequence of the crimes for which the accused has been convicted could legitimately be considered for inclusion in an order of reparations.”

Inder concludes that “reparations should not be limited to a narrow interpretation of the charges, but should be inclusive of the broader harms suffered as a result of crimes for which he was convicted. This is important for the communal healing process.”

Inder points out that while ICC judges did not rule on Lubanga’s culpability for sexual violence, judges reserved the right to address this issue for the purposes of sentencing or reparations. That implies that additional submissions or evidence could be presented ahead of any decision on sentencing or reparations, leaving the door open to a wider interpretation of who count as victims.

The TFV has already been running projects in eastern DRC, under a separate part of its mandate that allows it to provide support to affected communities as soon as a situation has been recognised as falling under the jurisdiction of the ICC. These projects deal with a broader range of victims than those defined by the terms of the criminal case. They include, for example, counselling and vocational training for victims of sexual violence in the Ituri and North Kivu districts.

Some experts argue that court-ordered reparations should only be part of the package of continuous support that is given to the war-affected region.

But some legal experts are already wondering whether there might not be a better way of doing things –in particular to break the restrictive link between criminal accountability and the harm that has been suffered. Criminal cases designed to establish accountability are so different from reparations processes designed to compensate victims for harm done to them that some experts argue for a new model, so that the latter is not determined by the former.

“It would be better if the legal system allowed victims to take their own initiative to construct a case for reparations,” Liesbeth Zegveld, a Dutch lawyer who specialises in legal remedies for war victims, said. “What I’d ultimately envisage is an international civil court, set up along the lines of the ICC, where victims can claim reparations for war or other large-scale damages, where they are dependent neither on political will, nor on the will of the prosecutor.”

Zegveld says that the aim of a criminal trial is often different from the goals of individual victims, and that legal proceedings against an individual can result in a very narrow definition of who the victims are.

“My fear is that victims could be included in a case because they give a face to the proceedings and add to the overall message that the prosecutor wants to send to the world, but their interests are only partly addressed in the whole legal construction,” she said. “It is important not to confuse the individual interest of victims to be compensated with the interest that justice is done.”

Blake Evans-Pritchard is an IWPR trainer in The Hague and Melanie Gouby was formerly IWPR’s multimedia producer in eastern DRC.