They may be few, but protesters outside Bahraini embassy say their presence is vital.

They may be few, but protesters outside Bahraini embassy say their presence is vital. 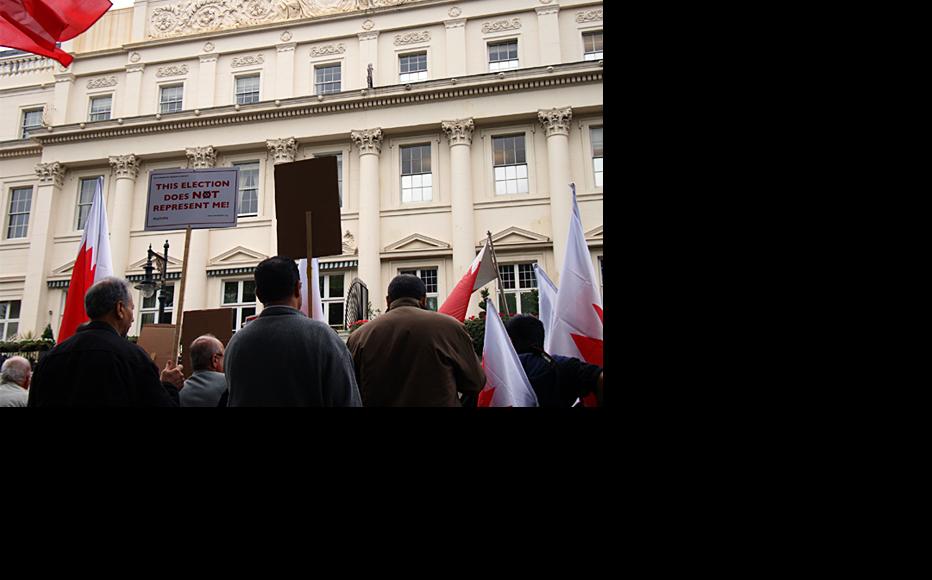 Protesters outside the Bahrain embassy in London. (Photo: Dominic Kavakeb)
The link has been copied

Outside the Bahraini embassy in London’s Knightsbridge, under a lowering sky, a handful of activists have gathered to protest the Gulf state’s upcoming elections.

“People are a bit late because of the parking,” mused Yasser Al Sayegh, of the Bahrain Justice and Development Movement, BJDM, the British-based group which organised the event. “And today is a weekday, so people are at work.”

Across the road from the embassy, a little section has been cordoned off with crowd barriers, although there is no crowd to restrain. Placards with the slogan “This election does not represent me” are stacked in a corner, and Bahraini flags fly overhead.

The demo has been called because today, 20/9/11, is the day when Bahrainis living in London are supposed to cast their votes at the embassy. Elections on September 24 are intended to fill the 18 seats vacated by the country’s largest opposition group, Al Wefaq, which left the government in March in protest at its bloody crackdown. The Shia party has decided not to participate in these elections either.

Similar demonstrations have been planned outside Bahraini embassies around the world too. But it seems difficult to stir up interest in the cause.

Dominic Kavakeb, of the BJDM, is busy trying to co-ordinate media coverage, speaking to the half-a-dozen journalists who have turned up, among them BBC World and Press TV.

This Tehran-funded outlet has followed the Bahraini story with particular dedication, with clear interest in the Shia-dominated protest movement.

Kavakeb, himself half-Iranian, says he is staunchly opposed to the Tehran government, “but it is the only station interested in covering Bahraini deaths”, he shrugged.

He’d vainly hoped that some British politicians would take part in the protest.

One former parliamentarian told him he would come - although he hadn’t yet showed up. “I thought [another member of parliament] might get involved too, but he didn’t reply to me,” Kavakeb continued sadly.

The demo may not have attracted the numbers or high-profile figures that flock to other more modish causes, but the Bahraini activists here are in no doubt their presence is vital.

“This makes a lot of difference,” said Shahab, 28, a student who has just finished his MBA in London. “People pass by and speak to us and we tell them about the situation in Bahrain.

“A couple of months ago there was a demo outside the Spanish embassy – we went over and spoke to the protesters about Bahrain. Almost no-one knew what was going on there. So the main reason is to get the message across.”

Abdul, 56, a dedicated activist who left Bahrain 31 years ago, agreed.

“There should be more people here, but at the moment it’s just important to tell the world that our people are suffering,” he said.

His family back home are going through hard times; his brother has been in prison for the last five months and his parent’s house has been raided by the security forces.

“They shouted at my father, who is nearly 80; these people don’t respect anyone,” he continued.

Nonetheless, Abdul believes matters will soon reach a tipping point. This coming weekend, protesters plan to come back to the Pearl Roundabout in Manama. The initial focus for protests, it was demolished by the authorities in March in an attempt to disperse the demonstrators.

“For years we tried to get elections in Bahrain,” Abdul added. “We got them in 2002, and nothing changed. So now we ask ourselves, why waste time and waste our lives?” The protesters wanting nothing less, he continues, than the complete dismantling of the system.

People continue to join the demonstration in dribs and drabs – a group is intended to come from as far afield as Manchester, apparently - but Kavakeb, for one, is not disheartened by the turn-out.

No matter how many people have turned out to protest against the elections, they seem likely to outnumber those who have come to the embassy to cast their vote.

In fact, Kavakeb adds with some satisfaction, no-one had been seen to enter the embassy so far that afternoon.

“There are no queues outside the embassy. And this is the chance for expats to vote,” he added. “To me, that says that people don’t believe in these elections at all.”

Daniella Peled is the editor of IWPR’s Arab Spring project.