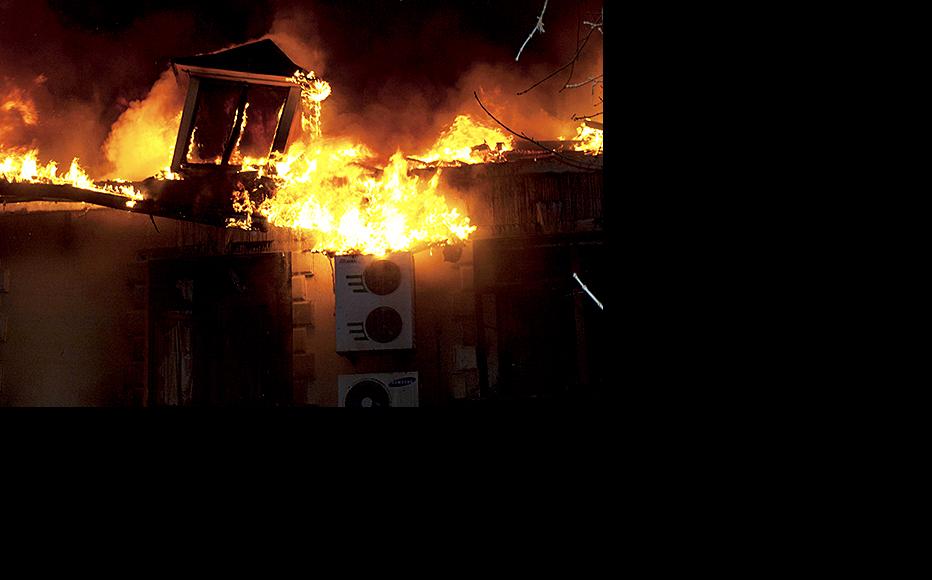 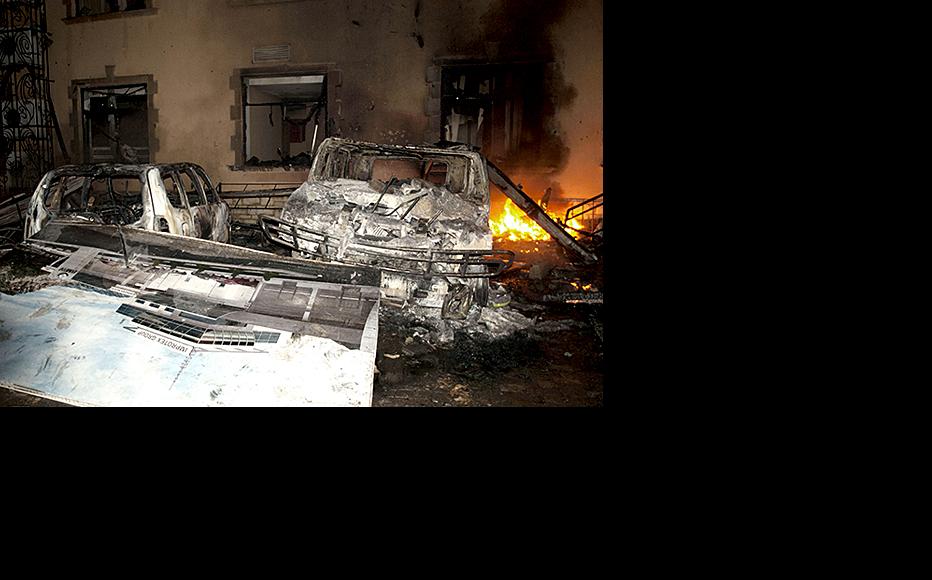 Vehicles burnt out after protesters surrounded a hotel in Ismayilli. (Photo: Shahla Sultanova) House belonging to the son of the district government chief. (Photo: Shahla Sultanova)
The link has been copied

Azerbaijani police have used rubber bullets and water cannon twice in the last week to disperse demonstrations which the government blamed on the opposition, but which participants said were spontaneous and stemmed from local grievances.

A day of protests in Ismayilli, a small town in central Azerbaijan, began after a fight late on January 23 between hotel owner Emil Shamsaddinov and a taxi driver. After Shamsaddinov’s car crashed, he and another man allegedly assaulted the taxi driver, who was taken to hospital.

A crowd estimated at over 1,000 gathered and started throwing stones at Shamsaddinov’s hotel. They set fire to a vehicle belonging to him, and the flames then spread and burned down the hotel.

“First we burned his Hummer which was parked next to the building,” a young man called Jabir said as he looked at the building in flames. “The fire from the Hummer burned down the hotel and a Chevrolet Camaro next to it. Then we torched another of his cars.”

The protesters then surrounded a house belonging to the son of district government chief Nizami Alakbarov, who is the brother of Azerbaijan labour minister Fizuli Alakbarov. They focused on Alakbarov in the belief that he is related to Shamsaddinov.

They broke through police lines and entered the house’s courtyard, where they set fire to motorcycles and a hut used by security guards, and called for the governor’s resignation.

Jabir said they wanted to set fire to the house as well, but ran out of petrol.

Alakbarov spoke to local journalists, denying any connection with Shamsaddinov and refusing to resign. He said he lost four cars and five motorcycles in the blaze.

“An argument between two people over a car accident should not be politicised,” he said.

The protests in Ismayilli subsided overnight after riot police were called in from neighbouring towns. Dozens of people were detained, as were Shamsaddinov and the other man involved in the assault on the taxi driver.

Jabir said young people were being arrested if they went outside.

“I was hit by three rubber bullets and later beaten. I can’t move now,” he said. “I only just got away.”

Four days before trouble broke out in Ismayilli, shop owners at a shopping mall in the capital Baku shut their businesses and staged a demonstration, blocking one of the main highways out of the city. They were angry at what they saw as high-handed behaviour of the site’s managers.

Police cleared the crowd in under an hour by firing rubber bullets and tear gas. Ten people were given two months in jail for disorderly behaviour and resisting arrest.

One protester who asked not to be named said she and her colleagues took to the streets after receiving a demand for 3,500 manats, about 4,300 US dollars, each to pay for a closed-circuit television system for the mall.

“We’re just sellers. We’re already paying 600 manats [a month] to the leaseholder and 450 to the managers of the centre for a 40 square-metre space. Let them use the money they take from us to set up the [CCTV] system,” she said. “The management won’t listen to our complaints.”

Another shop owner, Mammad Mukhtarov, said the traders would not be intimidated.

“They wanted to scare us by sending provocateurs into the crowd [and] beat us up. But we aren’t going to stand for it,” he said. “They want to raise the rent now; tomorrow they’ll come and take money off us under some other pretext.”

Fuad Safarov, a lawyer for the Bina mall, told IWPR that the protest was not what it seemed. He denied claims that managers had turned up for a meeting with traders accompanied by armed men.

“We are not convinced that all the participants were traders from the centre. There were provocateurs among them,” Safarov said. “If they were protesting about rent increases, then why were they shouting slogans like ‘freedom’?”

Ali Hasanov, head of social and political affairs in President Ilham Aliyev’s office, gave a similar explanation for the protests in Ismayilli, alleging that the political opposition was using local people.

“They take advantage of these people and they commit unlawful acts against the local executive and the law enforcement agencies,” he said. “They are making the social and political situation worse, they’re damaging public and private property, and they’re doing harm to people.”

Hasanov called on people in Ismayilli to steer clear of what he called “provocateurs”.

“Those who did this and those who took advantage of it will be punished,” he said. “I hope the law-abiding people of Ismayilli will not let provocateurs take advantage of them.”

In the town, Jabir and fellow-protester Elmir insisted they were angry not with Azerbaijan’s senior leadership, but with the way Ismayilli was governed.

Elmir added that there were no jobs in the town.

“I don’t blame the government for that. I blame those who run this town,” he said.

Idrak Abbasov is an IWPR contributor in Azerbaijan. Shahla Sultanova is a freelance journalist.