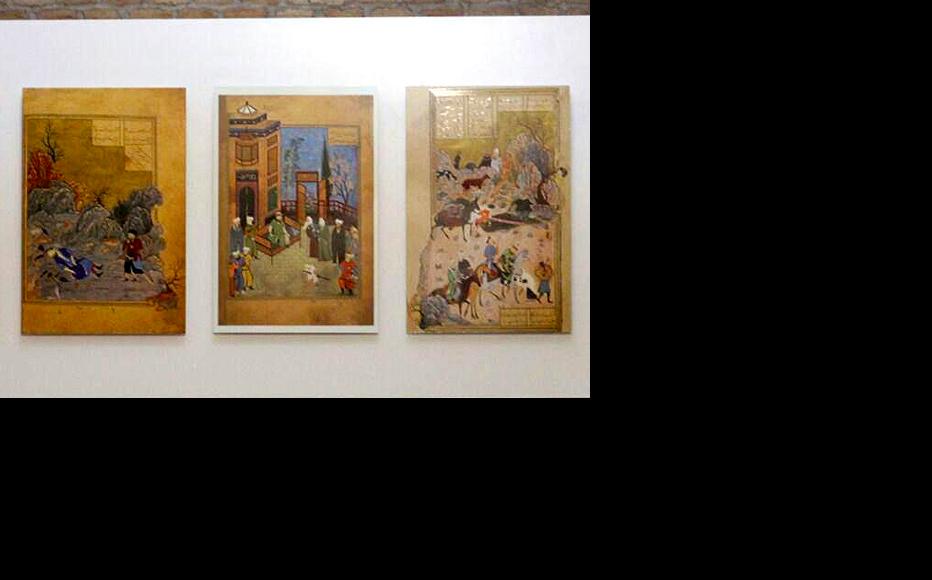 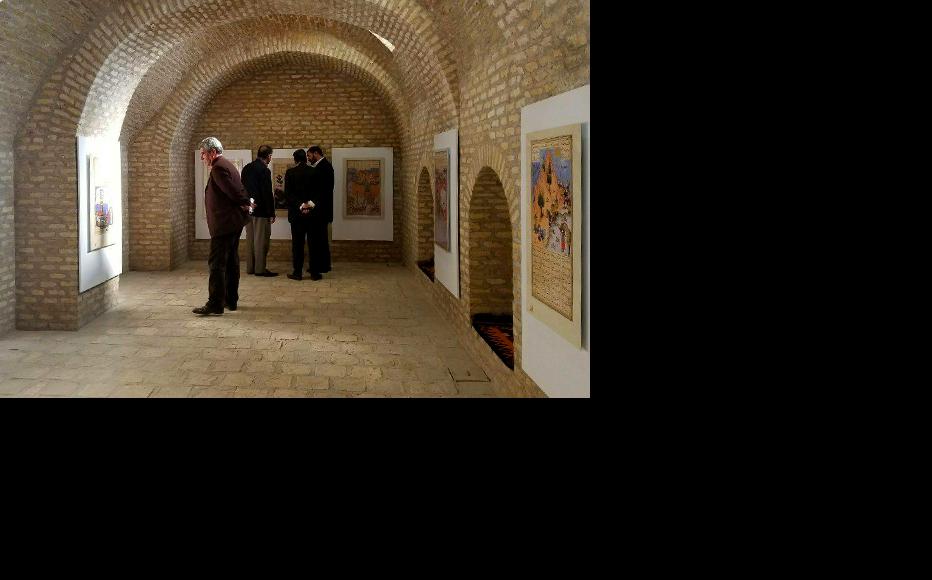 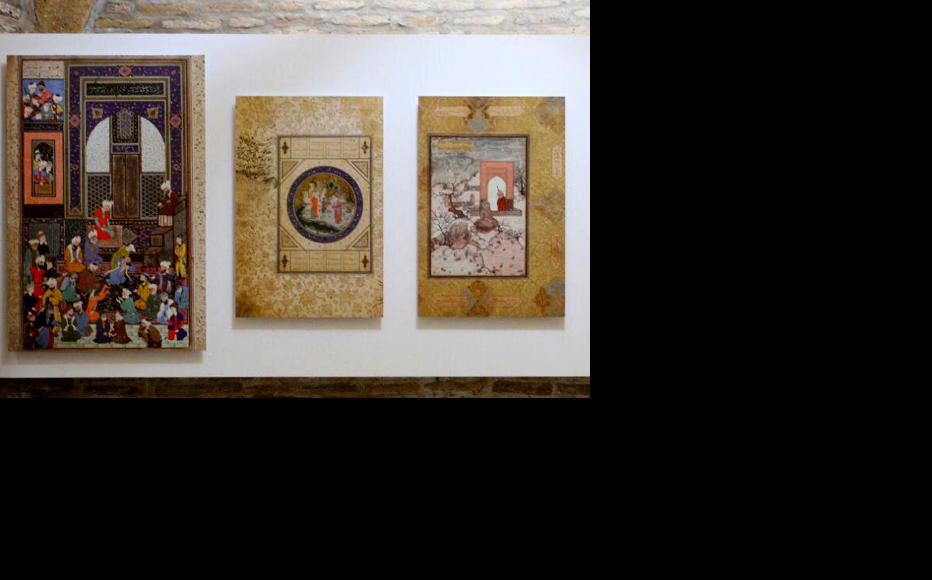 Medieval Herati miniatures displayed in the exhibition. (Photo: Sodaba Ahrari)
The link has been copied

Historians and artists in Afghanistan’s Herat province have welcomed a new exhibition organised by an American academic.

He then printed high-resolution images onto metal, thereby allowing him to exhibit the reproductions abroad.

Barry, an expert in Eastern Islamic civilisations, told IWPR, “When I saw these various works of art in museums around the world I started thinking about how sad it was that Afghans themselves couldn’t see their own cultural heritage.

“So with the assistance of the American Institute for Afghanistan Studies at Boston University, and in cooperation with the US and French embassies in Kabul, I started to build a collection of images.

“It took several years to collect them, have them printed in Paris and then set up the exhibit in Herat, but there’s been tremendous interest.

“Visitors were moved very, very deeply. They wanted to get a sense of what their ancestors had accomplished.”

Barry’s exhibition opened in the historic citadel of Herat, in the centre of the eastern city, in December last year.

The artworks should remain on display until the end of February, although discussions are under way to make the exhibition permanent. A second exhibition is planned for Kabul in March, around the time of the spring festival of Nowruz.

The Timurid empire flourished across central and southern Asia between the late 14th to early 16th century.

During the 15th century, Herat, now Afghanistan’s third largest city, was its capital, and it was during this period that some of the most important paintings in the Muslim world were produced.

Barry, formerly with Princeton University and now with the American University of Afghanistan, said that much of the artwork was eventually dispersed to countries such as Iran, Turkey and India following the demise of the Timurid dynasty.

Many international museums exhibiting the miniatures today misleadingly attribute them to present-day Iran.

“Herat was a major creative hub of eastern Islamic civilisation – it produced some of the most important paintings of the entire Muslim world,” he said.

“The extreme sophistication of this art is incredible. Every rock and tree carries allegorical significance.

“For example, if in any of these paintings you see a plane tree in multi-coloured autumn foliage leaning over one of the figures, it signifies the Tree of Life, bowing reverently over the saintly protagonist of the story.

“These elaborate codes were largely created by the Herat workshop of the 15th century and then imitated in the 16th century by Iran, Turkey and India.

“Its [the artwork’s] confiscation [by foreign powers] is unparalleled anywhere in the world. Modern Afghans have felt culturally downgraded as a result.

“It was a dream for me to bring part of Afghanistan's civilisation, part of its culture, back to the country and tell ordinary people there how extraordinary their heritage is.”

Herat governor Mohammad Asif Rahimi welcomed the exhibition as a remarkable success. He acknowledged that the city’s cultural heritage was in need of greater recognition both domestically and internationally, but said that Barry had gone some way in highlighting the issue.

“Each of these prints holds a wealth of information and is of enormous artistic value,” he said. “A booklet needs to be developed for each piece so that everyone with an interest can understand its history and its merit.”

Arif Raoufian, Herat’s director of information and culture, also described Barry’s work as a significant step towards reviving Afghanistan’s understanding of its rich artistic past.

He noted that the collection provided a phenomenal opportunity for studying the works of Kamal-ud-din Bihzad, born in Herat in 1465 AD.

“This collection of pieces from the Timurid era is a wonderful way of linking today’s Herat with our past,” he said.

While welcoming the exhibit, other officials, teachers and artists in Herat warned that the city’s status as a centre of culture was nonetheless in jeopardy.

Sharif Ahmad Haidari, head of the Kamal ud-Din Behzad art school, said that support for the visual arts in the province was in decline. Falling demand for paintings sold by the school and other institutions was a clear indicator that the public’s appetite for art had waned.

“If we compare today with seven or eight years ago we can see that our affection for and understanding of our art is much poorer,” he said.

Sultan Ahmad Noorzai, who has worked in ceramics for the last 40 years, also said that Herat was in danger of losing its artistic standing.

He told IWPR, “The condition of the art world in Herat province is far from satisfactory and many artists are now either working in other professions or are working abroad.”

Local artist Raihana Akbari urged the government to do more to address the decline.

She called on the ministry of information and culture to hold seminars as well as organise regular, international exhibitions to promote the city.

“If neither the public nor the state value our art then artists throughout the province will become discouraged,” she argued.

“Sadly, where we’re at today is not comparable with the Timurid era. Many of the arts - skills such as tiling and miniatures that were around at that time - have been lost.

“Steps that should have been taken to protect Herat’s artistic heritage weren’t taken.”

Jawid Zargham, the provincial head of arts and culture, said that he was committed to addressing the issue. He argued the popularity of the city’s painting and calligraphy was in fact growing, adding that he was working towards establishing a market for artists to display their pieces in Herat.