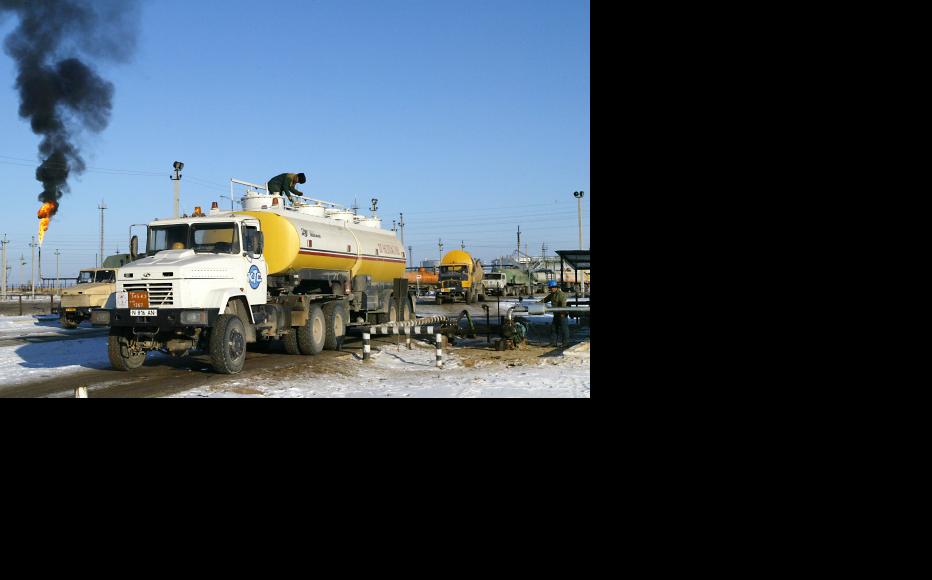 A petrol tanker waits at a loading terminal in north Kazakstan. (Photo: Oleg Nikishin/Getty Images)
The link has been copied

Kazakstan’s new labour law has been welcomed by employers as a positive move towards liberalisation which will help the country weather a harsh economic period.

However, those representing workers’ rights fear that the reforms will simply make it easier for employees to be hired and fired.

The law, which came into effect on January 1, reverses labour legislation inherited from the Soviet system of state control and direct oversight into the workplace.

It introduced the new concept of a flexible labour market, where employers and employees solve issues bilaterally - an unknown quantity in the Kazak oil and gas sector, which traditionally has had strong unions.

Employers and employees will now have to regulate their own relationships, with the state’s role minimised to social care provision.

The law expands the conditions under which an employer can terminate contracts, including declining production that results in falling profits.

The employer can also establish a probationary period for all employees regardless of their status, including persons with disabilities.

Critics say that the law effectively gives employers a blank cheque when it comes to resolving employment issues.

But officials say that this liberalisation is vital as Kazakstan’s resource-based economy feels the effect of falling hydrocarbons prices on the global market.

Kazakstan remains the biggest energy producer in Central Asia, but the total revenue of its extractive industries sector decreased by 52 per cent in 2015 as compared to 2014.

According to energy ministry data, the country's oil and gas industry employs about 200,000 people.

Kazak energy minister Vladimir Shkolnik warned a state meeting in Astana last November that if oil prices remained the same throughout 2016, about 40,000 of these workers could lose their jobs.

An employee of the AGIP KCO oil company from Atyrau, West Kazakstan, who asked to remain anonymous, told IWPR that workers were also worried about how the new labour law would affect them.

He conceded that so far, there had been no layoffs, and worker’s salaries had even increased by 11 per cent since his company had merged several departments to optimise business.

Elena Mustafina, deputy chairwoman of Kazneftegazprofsoyuz, a trade union of oil and gas workers, said that there could be trouble in the long-term.

She told IWPR that most large and medium-sized Kazak national and foreign companies operating in the industry arranged collective agreements with trade unions. This was largely an issue of scale, as such companies employ thousands of people.

Under such agreements, workers’ representatives negotiated directly with the management.

But collective agreements, according to the new Kazak labour kaw, include workers representing the company.

“According to the law, workers are elected [to represent a company in a trade union], and these persons are included in the collective agreement. In practice, these representatives are appointed by the company administration, usually these are workers who are in the company’s pocket. Therefore, there is no real partnership,” Mustafina told IWPR.

According to the new law, labour unions will also have less direct influence over collective agreements.

Workers will find it harder to change the terms of their contract once it has been signed, for instance, in negotiating a pay rise.

This may become a sensitive issue in the light of the devaluation of the Kazak tenge currency.

Kazakstan switched to a free-floating exchange rate last August in an attempt to support a national economy in crisis.

The tenge has fallen 45 per cent against the dollar in the last six months, with savings in Kazak currency being massively devalued.

For their part, employers are also nervous because oil and gas unions have in the past not been shy about making their displeasure felt.

"Based on the monitoring results by the ministry of health and social development, 52.4 per cent of labour disputes arise because of wages not being paid on time,” Mustafina said.

“Forty-three per cent occur because of dissatisfaction with wage rate. Besides that, there are disputes over the ongoing difference in wages between foreign and Kazakhstani employees," she continued said, adding that workers were also often unhappy about the level of medical care guaranteed by an employer.

“Employers are afraid, knowing that [violations of the law] will result in hostile behaviour by the workers, as they represent a politically aware class. These [workers] are not office workers; here [in oil and gas sector] everything soon becomes known about.

“If someone’s rights are violated, everyone else will get to hear about it. In such a collective body any kind of unfair behavior towards the workers is more dangerous,” Lazutina said.

The future of workers’ rights, Lazutina concluded, would depend on how good trade unions were in negotiating with a new generation of Kazak managers.

Aktan Rysaliev is the pseudonym of an Almaty-based journalist.

Kazakstan
Trade unions
Connect with us