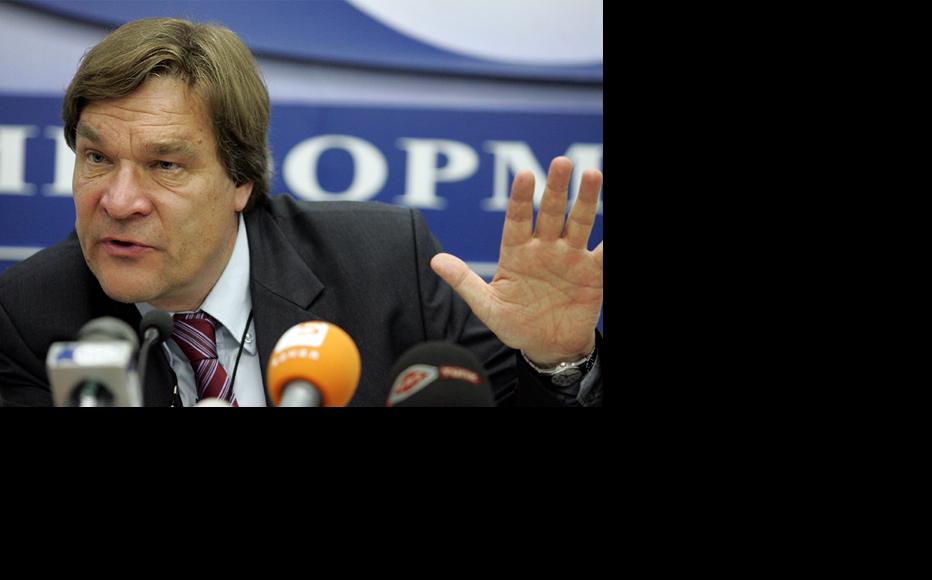 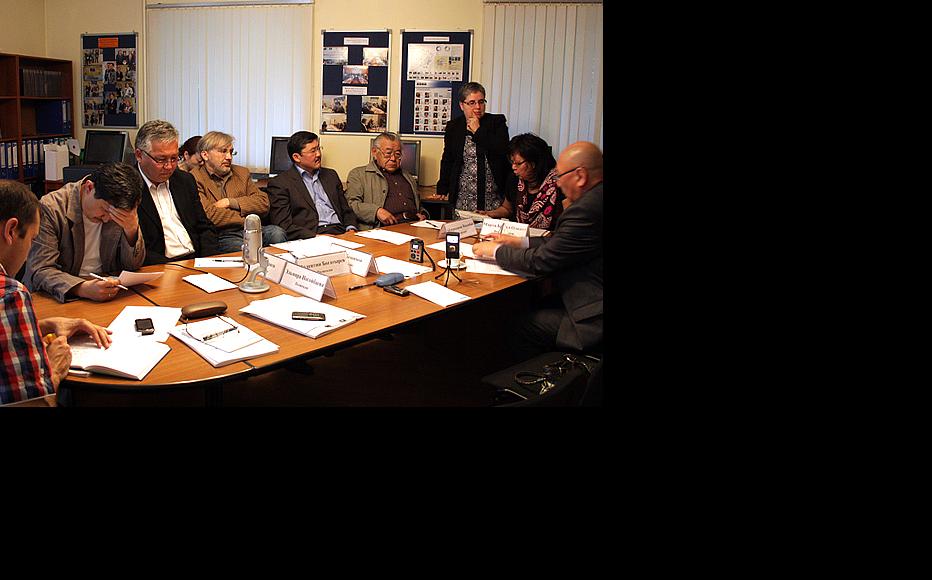 Leading analysts from Kyrgyzstan gathered for a debate at IWPR’s office in Bishkek on May 10, with a live link to Central Asia-watchers in Washington arranged by the Carnegie Endowment. (Photo: IWPR)
The link has been copied

An independent report into last summer’s violence in southern Kyrgyzstan provides a useful account of what happened, analysts in the country say. But they differ on how comprehensively it identified the causes and culprits behind the bloodshed.

At a May 10 teleconference with analysts in Washington arranged by IWPR and the Carnegie Endowment for International Peace, experts in the Kyrgyz capital Bishkek said much now depended on whether any action was taken on the recommendations made by the Kyrgyzstan Inquiry Commission, KIC.

The KIC, a team of international experts commissioned by the Kyrgyz president and led by Kimmo Kiljunen, the OSCE Parliamentary Assembly’s special representative for Central Asia, published its findings on May 3, after spending months interviewing 750 witnesses and examining thousands of pieces of documentary, photographic and video evidence.

The commission said some of the abuses it identified in Osh would, if proved in a court of law, constitute crimes against humanity.

It was now essential for the national authorities to identify the individuals responsible for the violence and hold them to account, the report said, but so far prosecutions had been “selective” – targeting mainly ethnic Uzbeks – trials had been conducted unfairly, and there were allegation that suspects were tortured while in detention.

The KIC found that three-quarters of the 470 people known to have been killed were Uzbek and most of the rest Kyrgyz. Thousands were injured, and the KIC also collected evidence of sexual violence.

When it looked at the causes of the violence, the commission found that nationalist sentiment was boosted by competing political interests in the context of a power vacuum, fragile state institutions and weak rule of law in southern Kyrgyzstan.

Despite the weakness of state institutions following regime change in April 2010, the provisional government either failed to notice or underestimated a deterioration in ethnic relations. Violence was, the report said, “reasonably foreseeable”.

Lack of intervention by Kyrgyzstan’s security forces, and that fact that some members allowed their weapons to be seized by the mob, suggesting lapses in command structures and training, and raising questions about possible complicity in the violence.

Various parts of Kyrgyzstan’s establishment have already rounded on the KIC’s findings. The government issued a statement saying the document missed out crucial elements in the chain of events, and was wrong to assert that ethnic Uzbeks suffered disproportionately.

In similar vein, a parliamentary commission charged with investigating the unrest in southern Kyrgyzstan accused the KIC of ignoring the damaging role of what it characterised as power-hungry Uzbek community leaders, in addition to that played by associates of ousted president Kurmanbek Bakiev and by organised crime.

At the IWPR-hosted debate in Bishkek, some speakers also found flaws in the KIC’s approach.

“I was disappointed in the report’s methodology,” Elmira Nogoybaeva from the Polis-Asia think tank said. “It gives the impression that there were just three actors in the events in Osh – the Kyrgyz, the Uzbeks and the government. The rest don’t get a mention.”

Other analysts disagreed. Pavel Dyatlenko, also from Polis-Asia, said the KIC provided “the most analytical and most accurate answers to the questions posed out of all four reports”. The other three are a report released in March by a special national commission – separate from the parliamentary commission – a probe by a group of Kyrgyz and Uzbek human rights activists, and a report by the New York-based Human Rights Watch. (On the controversy around the special commission’s report, see Deep Rifts Remain in Conflict-Torn Kyrgyz South.)

“It identifies those responsible by name, it makes specific recommendations, and it doesn’t make references to abstract ‘malign forces’,” he said.

In addition, the fact that the KIC applied the rigorous language of international law in classifying abuses will “make it possible to pursue further investigations, identify perpetrators, and determine compensation for victims”, Dyatlenko said.

What actually happens now that the report has been made public is unclear.

Emil Kaptagaev, who heads the presidential office, said the fact that an independent investigation had been carried out showed that the administration was prepared to listen and make policy changes.

“The international community has seen that the Kyrgyz authorities have nothing to hide, and that we are trying to learn the lessons from what happened,” he said.

Mira Karybaeva, who heads a department in the Kyrgyz presidential administration responsible for ethnic policy, said the government was putting together a working group that will draft reforms to the way judges, prosecutors and police are recruited.

Speakers at the IWPR-Carnegie Endowment event noted that with a presidential election due later this year, the debate about what happened in southern Kyrgyzstan would be a hot topic.

“The ethnic aspect of this conflict provides a pretext for using the [KIC] report as a political asset,” Nogoybaeva said.

Valentin Bogatyrev of the Perspektiva analysis group said the report could be misused as a political weapon. “At that point its failings will play a significant role. Participants in the political process will make active use of them against opponents whom they can blame for what happened last June,” he said.

Another analyst, Mars Sariev, agreed, saying, “Those who weren’t in power during the tragedy will be able to present themselves in a better light.”

By contrast, the KIC’s findings could be bad for former members of the interim government from the Ata Meken, Social Democratic and Ak Shumkar parties, who would be vulnerable to criticisms that the administration they served in did not do enough to prevent the violence.

Askar Beshimov, who heads the Future Project think tank, warned that some political forces might “manipulate” the report’s findings for their own ends.

Some of the political groups that have emerged since the violence reflect a strong vein of Kyrgyz nationalism.

“Ahead of the presidential election, rising nationalist sentiment might be seized upon, and this will be well-received among the rural population,” Beshimov said.