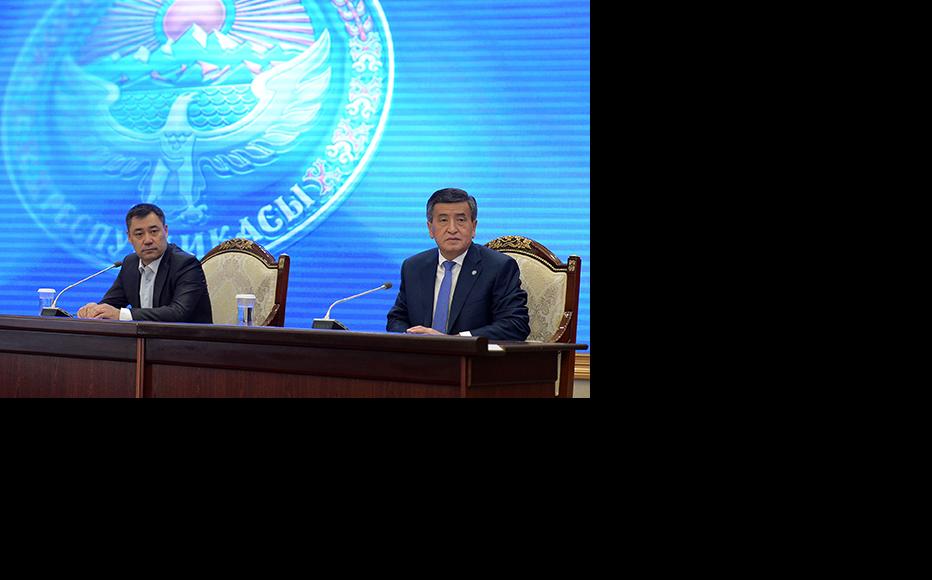 Uncertainty continue to surround political developments in Kyrgyzstan, with fears that the country may become increasingly internationally isolated unless the new government commits to follow constitutional norms.

Mass opposition protests followed a disputed election on October 4, which saw three parties associated with the ruling elite declared as clear winners. In a night of unrest in central Bishkek, crowds seized control of a number of official institutions and freed opposition figures from prison.

The Central Election Commission (CEC) cancelled the results, but parliament then voted to extend its powers until summer next year, although the constitution mandates that its five-year term expired on October 28.  Fresh presidential elections will be held on January 10.

Opposition politician Sadyr Zhaparov was one of those released from prison in the chaos of the night of October 5 and subsequently approved as prime minister.  He had been in custody on charges relating to organising riots, hostage-taking and hooliganism in 2013.

Zhaparov then took on the role of acting president after previous incumbent Sooronbay Jeenbekov unexpectedly resigned on October 15.

He vowed that he would step down as president and prime minister in early December to participate in the elections on an equal footing with other candidates.

However, legal experts are concerned by the decision to postpone the date of parliamentary elections and extend lawmakers’ powers, as well as Zhaparov insistence on promoting further constitutional reform.

He has maintained that the current number of 120 lawmakers should be cut to 50, elected in single-mandate districts rather than according to the party system.

Political analyst Aida Alymbaeva said that Zhaparov’s focus was simply to stay in office and strengthen his powers.

"To this end, he proposed to amend the constitution,” she continued. “The current constitution gives huge powers to the president, but Zhaparov wants to create a super-presidential form of government” with a parliament dependent on, and loyal to, the president.

“I think that the same thing will happen in Kyrgyzstan that we saw after the previous coups [in 2005 and 2010]– the redistribution of property,” Alymbaeva said. “There may be some cosmetic changes, high-profile detentions to simulate an anti-corruption campaign, but nothing more. Unfortunately, we will not see any prosperity, any reform of public administration under Zhaparov.”

Indeed, the detention of former deputy head of the customs service Raim Matraimov on October 20, who is accused of large-scale corruption, was ridiculed by the public, with rumours circulating that the whole arrest was staged. Within a few hours, Matraimov was released to house arrest.

There was also much discussion on social media of the high-profile arrest of notorious underworld figure figure Kamchybek Kolbayev, with some suggestion that this had also been for show.

In addition, the country is experiencing serious financial problems.  Even before the political crisis, the coronavirus pandemic meant that Kyrgyzstan had been forced to borrow from international financial institutions to cover a budget deficit of two billion dollars.

The new foreign minister is lobbying for international financial support to continue, but Kyrgyzstan's traditional partners have clearly been disturbed by the political crisis.

Russia has indefinitely suspended all financial aid, having previously routinely allocated funds to the ministry of finance to support the state budget, as well as various grants through other organisations.

In early October, for instance, Russia approved a Kyrgyz agreement with the Moscow-lead Eurasian Fund for stabilisation and development for 100 million dollar 20 year loan. However, following the subsequent political crisis, the transfer was paused, with no official comment from the Russian side.

The EU also announced it was suspending a six million euro grant to support government efforts towards digitalization, and made clear that new financial assistance would only be up for discussion after fresh parliamentary elections.

In an interview with Al Jazeera, Zhaparov acknowledged that several traditional allies have not been keen to cooperate with the new government.

“Neighbours, the EU and the US have doubts,” he said. “But we will prove [ourselves] by deeds, not words.”

Others at home remain unconvinced.

"I don't think he has any plan or programme to reform anything,” said analyst Chynara Temirova. “He only talks about things that are currently very popular with the people.”

"Whatever grievances the people have, these are the promises that Zhaparov [presents them with],” she continued. “It just seems to respond to the aspirations of the common people. People who understand politics and economics understand that a comprehensive approach is needed to solve all these aspirations. These are complex decisions that are not always easy to explain to people. But populists like Zhaparov give people a very easy solution to the problem.”

Some experts warned that the government needed to strictly adhere to constitutional norms so as to avoid international isolation.  Without donor revenue, political change would inevitably stall.

"Naturally, it will be very naive to expect any reforms from him, because no reforms can be carried out without funds,” political analyst Asel Doolotkeldieva said. “If he can at least lead the country through the winter and hold elections fairly, this will be a great achievement.”

Giving Voice, Driving Change - from the Borderland to the Steppes
Kyrgyzstan
Crisis, Democracy, Elections
Connect with us