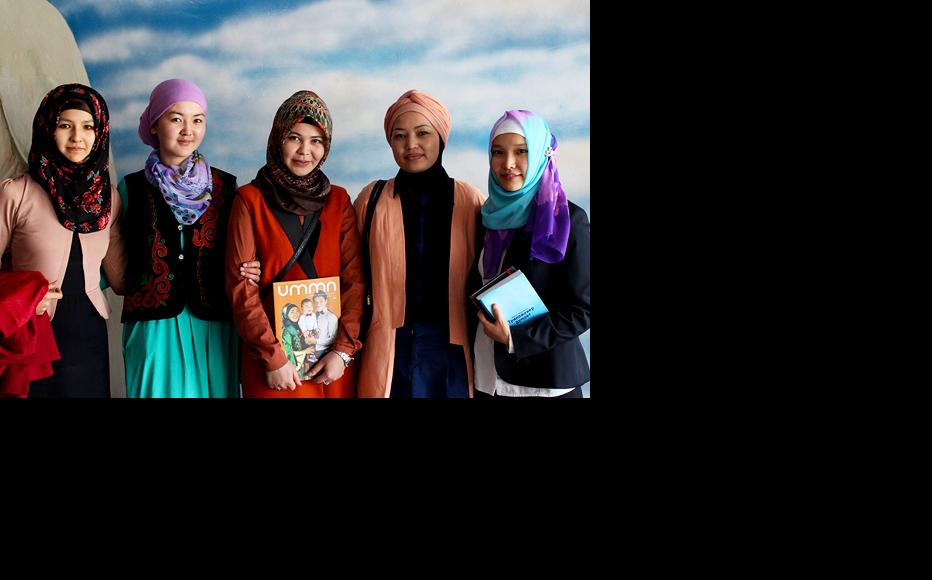 Journalists working for Umma, Kyrgyzstan’s only Muslim affairs magazine. (Photo courtesy of UMMA magazine)
The link has been copied

Eliana-Maryam Satarova is editor-in-chief of Umma, Kyrgyzstan’s only Muslim affairs magazine, established two years ago to counter stereotypes about the community.

The glossy quarterly has proved popular among younger Muslims for its progressive stance and support of issues such as women’s rights.

Although Kyrgyzstan is a secular republic, religion is growing as a force amongst its majority Muslim population and the two forces are often at odds with each other.

Satarova told IWPR that her aim was to show the Kyrgyz public the difference between traditional Islam and extremism, as well as challenging views of Muslim women as weak and submissive.

What are you trying to achieve through this magazine?

In the magazine we try to neutralise stereotypes about Muslim women. We try to give great, motivational examples of women who are engaged in business, successful in the family, in society and in sport, who break down stereotypes. We also try to educate people about women in Islam. We created the magazine because society has the wrong understanding of Islam…the entire magazine is designed to show that Islam is a modern religion that calls for education, progress, peace.

Kyrgyz law provides ample opportunities for women to achieve their ambitions in all areas of their lives. Is the reality the same as the theory?

Women's rights are not respected despite the democratic system, secular laws, various projects, support provided by international organisations and the existence of different conventions and declarations on women's rights. First of all, this is due to women’s ignorance of their own rights, and also due to men’s ignorance. Social pressure and the inability to part with anachronistic principles are also reasons why we keep seeing this problem.

Women’s awareness of their rights in law should be improved. The majority of the population consider themselves to be Muslims, so we also need to talk more about women’s rights in Islam. Such outreach activities should be held both among women and among men, who are the heads of households.

Men attend Friday sermons, so we need to raise the issues of women’s rights at these sermons. We need to broaden the outlook of imams; they should have an academic qualification and have an understanding of these issues. We should speak about it in the media, make relevant TV programmes, open dedicated centres.  Our muftiate should also support existing women’s organisations. We need to embark on a complex effort with the participation of both the government and Muslim organisations. The issue of women’s rights in our country can be solved only through education.

What rights does a woman have according to Islamic law?

In Islam, a woman and a man are equal before God, so they have equal rights but different responsibilities. A woman in Islam to some degree is even higher than a man. A woman in Islam has an elevated position, but it’s all about the understanding and interpretation by believers in our society.

According to Islam, family support is the responsibility of men, ie a woman doesn’t have to work, or at least doesn’t have to do hard labour. If a woman wants to work, she can do it, but the main thing is that it doesn’t harm her physically and that it benefits society.

Speaking about domestic violence, you know that Islam prohibits any violence, especially against women. Family relations should be based on a decent treatment of each other. There’s no such thing as “if you are a daughter-in-law, then you must do what I say”. If a woman wants to do something, she can do it. A man shouldn’t be disrespectful to his wife or make her do anything against her will. As to public rights, both women and men have equal political rights, both have the right to vote and fulfil themselves in various positions.

This is the ideal picture of what should be. But in practice we see that many countries, including Muslim countries, face a problem of understanding and interpretation. For the sake of the political system, society distorts Islam and women's rights in general.

Nevertheless, society has developed an opinion that a Muslim woman has a subordinate role.

This is a stereotype. Muslim countries where Islam dominates also differ in their political regime, traditions and customs. Some people get their information about Islam not from actual sources but through the lens of these countries, where it has been a custom that a woman may not realise her potential and can only sit at home, while a man is the head of the family.

These are stereotypes and misunderstandings. The man is indeed the head of the family in terms of provision, but it doesn’t mean that he is superior or better before God. Both man and woman stand equal before God, and they will be valued for their deeds only. In Muslim countries women hold various positions. In the Persian Gulf countries, women are maintained by men and few work [outside the home]. In Malaysia, Iran and other countries, women are active, even politically. They participate in protests and movements, stand for their rights, hold senior positions and so on.

So the understanding of Islam comes from the country that spreads it?

Yes, absolutely. Our Islamic literacy is low, and the perception of Islam comes from certain countries, where not Islam, but traditions and customs that pre-date Islam dominate. Therefore, we have a warped conception.  When our society talks about Islam, many relate it… to women in Pakistan or Afghanistan although, in fact, this is not about Islam, this is about traditions and customs that existed there already.

How do you change the attitude of young religious women who think that they must only stay home and take care of the family?

In general, our society is active and our women have always been active. A woman wearing hijab should not isolate herself. When we carry out various activities where we explain that a woman should develop her own potential, we see good trends, generally.

Working as the editor of this Islamic magazine I see the enormous potential in young Muslim women. Every day I discover new talents. Women, even those who stay at home, are involved in various activities, such as volunteering, charity work, the arts, business. The image of [powerless] women in hijabs is gradually disappearing but it takes time.